Wish I Was There! – Cruise envy can strike at any time. 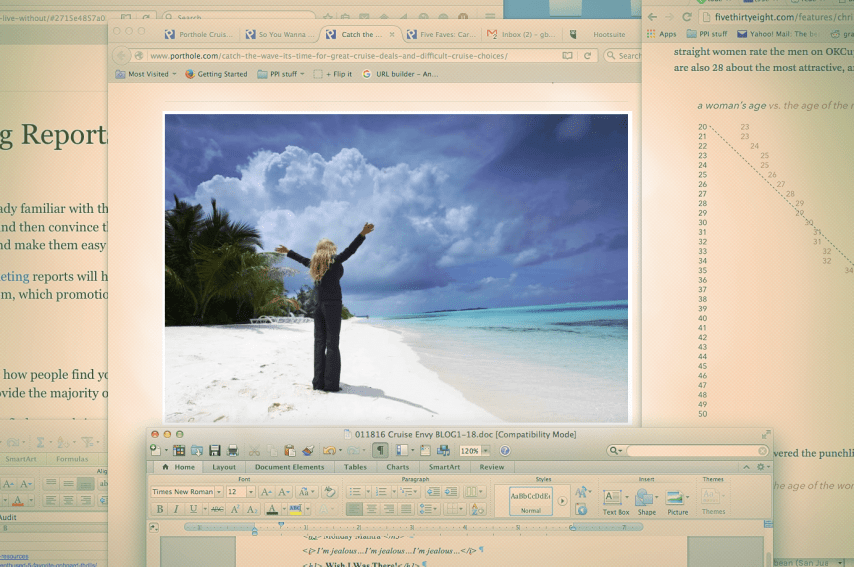 Wish I Was There!

Cruise envy can strike at any time.

I’m not a very envious person, although I might have become one if someone I really, really didn’t like won the Powerball jackpot last week. In general, I’m delighted by people’s good fortune and nothing makes me happier than someone achieving success and experiencing life’s pleasures. Getting married? Having a baby? Promoted at work? Wonderful news!

So why do I positively seethe with envy when I scan cruise forums and Facebook posts and see live, onboard reports from friends and sometimes even strangers detailing the fantastic time they’re having and sharing the images that prove it?

At the moment, the local news is talking about wind chill factors in the single digits, and here are Donna and Gary zip-lining across the rain forest in St. Lucia wearing tank tops and getting tanner with each port that Seven Seas Navigator calls at. What really ticks me off about them is that they just moved to Key West from New York two years ago so, seriously, what could they possibly need a vacation from? I, on the other hand, am sitting on the couch, my view from the window one of gray skies and drizzle.

Dawn, aboard Norwegian Breakaway, is posting food porn, graphic close ups of the perfectly-cooked medium rare strip steak she ordered at Cagney’s, a sprig of rosemary artfully placed atop and a single cherry tomato sitting alongside. A steaming bowl of the restaurant’s baked potato soup is the next shot and since Dawn knows how much I love that soup, she’s just being mean. And, oh great, now she’s back in her suite — The Haven, I might add — and she shares a photo of what greeted her when she entered: An elaborate five-towel towel animal standing guard over a plate of delectable petit fours: two chocolate-covered strawberries, two strawberry tarts, a little chocolate cup holding blueberry-topped custard and a riot of chocolate curls garnishing it all.

Even when I’m cruising, I sometimes experience pangs of envy, particularly when I meet someone who tells me they’re doing “back-to-back” sailings. Even if it’s the first day of the cruise, my mind leaps ahead to disembarkation day and I envision myself collecting my luggage on the pier while this son of a gun gets to remain in his stateroom and look forward to another week in paradise.

Yes, I’m obviously jealous. But despite that, I want to wish everyone sailing this week a spectacular and memorable voyage.

And I apologize for that little stab of glee I felt when the news reported that there are widespread storms through the Caribbean. Hope you packed an umbrella.