Queen of the Mississippi 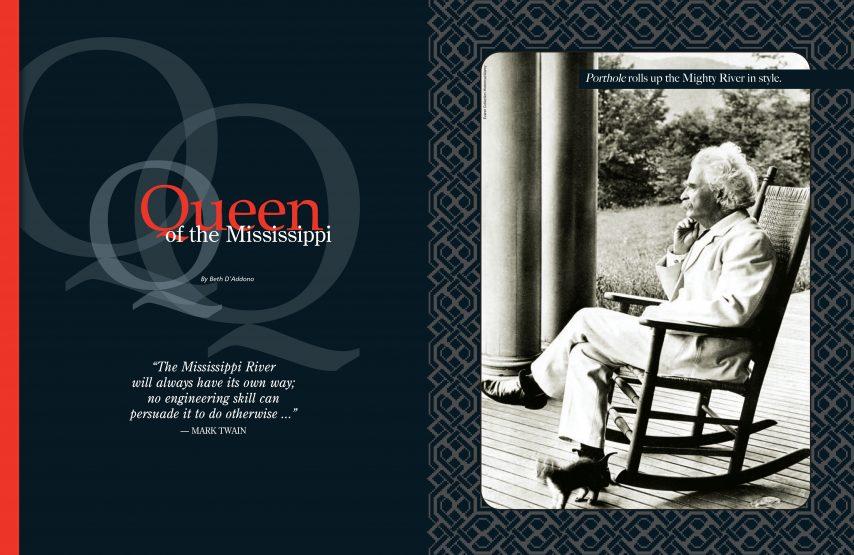 Queen of the Mississippi

Porthole rolls up the Mighty River in style.

“The Mississippi River will always have its own way; no engineering skill can persuade it to do otherwise …” – Mark Twain

That Mark Twain knew what he was talking about, but that hasn’t stopped the current revival of passenger ships patterned after the grand Victorian riverboats that graced the Big Muddy in the late 1800s. The newest of these is the Queen of the Mississippi from American Cruise Lines, a Connecticut-based leader in small-ship cruising with a fleet of six ships and 35 itineraries along the Eastern and Western Seaboards including Alaska, the Columbia and Snake Rivers, Puget Sound, and the San Juan Islands.

The Queen, built in Salisbury, Maryland, is the first new paddle wheeler designed for overnight travel on America’s rivers in nearly 20 years. Add into the mix the refurbished 436-passenger American Queen, which the Great American Steamboat Company returned to the river in April 2012, and the Mississippi is back as a river-cruising destination.

Christened in New Orleans in August 2012, the five-deck, 150-passenger bespoke Queen conjures the halcyon days of riverboat travel, complete with a bright red paddle wheel (for effect only, as the ship is diesel-powered). Although it looks Mark Twain-worthy, the lovely stern-wheeler has modern amenities such as elevators, WiFi, and large staterooms with private balconies to go along with a 132-year-old Nichol steam calliope that was originally a fixture of the Washington, a paddlewheel steamboat that operated on the Mississippi and Ohio Rivers from 1880 to 1938.

The mighty river’s appeal is global, judging from the range of passengers aboard an early December one-week round-trip cruise out of New Orleans. Besides guests from states including California, Florida, Pennsylvania, and Montana, passengers hailing from the United Kingdom, Canada, Bolivia, Spain, and Brazil were aboard to see the famous river up close and personal. Although American Cruise Lines quotes 55 as the average passenger age, this particular cruise seemed to skew older. The itinerary drew history buffs interested in the area’s antebellum and Civil War history, with planned stops at Oak Alley Plantation outside of New Orleans; Natchez and Vicksburg, Mississippi; St. Francisville, Baton Rouge; and Darrow, Louisiana, before returning to the Port of New Orleans.

Like American Cruise Lines’ other ships, the Queen’s cabins are much larger than the industry average of 175 square feet. Even the first-passenger-deck cabins without balconies are light-filled and spacious, each with a large picture window and elbow room to the tune of 268 square feet. The bathrooms are full-sized and outfitted with plenty of storage options. The boat’s other 66 cabins range from 268 to 460 square feet, all with private balconies. The ship’s biggest ticket accommodations are the 460-plus-square-feet corner suites equipped with sliding glass doors and balconies that wrap a few feet around the bow for forward river views.

Ken Albrecht and his lady friend Laurie Peressini from Great Falls, Montana, raved about the relaxed nature of life aboard the Queen. “This is my first time on a river cruise,” said Albrecht, “and it’s very different from a big ship ocean cruise experience.”

Although Albrecht would have liked to see more entertainment and a staffed bar after the nightly evening shows, he found the river all the entertainment he needed by day. “I guess I’m surprised at what a working river the Mississippi still is,” he said. Peressini gave the Queen’s accommodations high marks. “The state rooms are big and comfortable. It’s nice to have the option to have breakfast in our room in the morning.”

It’s tough to work up an appetite aboard the Queen. There’s always coffee, water, soft drinks, and juices available on each deck, along with snacks like hot cookies, chips, crackers, and fruit. Afternoon tea is served daily. The stern-wheeler’s dining salon, all polished wood and crystal chandeliers, serves an open seating breakfast, lunch, and dinner, with room service an option for breakfast. Still feeling peckish? Guests can get a snack just about any time of day or night upon request. Menus focus on freshly prepared Creole and Southern cuisine — think seafood gumbo, squash bisque with tasso ham, mahi mahi with crawfish étouffé, beef tenderloin, and bananas Foster bread pudding. Cocktails, wine, and beer are included in the ticket price.

The daily happy hour from 5:30 to 6:30 p.m. was a lively event, with every imaginable cocktail (other than blender drinks) available. Passed hors d’oeuvres were impressive, ranging from baby lamb chops to bacon-wrapped scallops and crab cakes. Wine and beer was served during dinner, although cocktails were available for the asking, even after the bar closed at 6:30 p.m.

Entertainment aboard the Queen was on the scant side, although the quality was good. By day, trivia games and bingo were popular, as were the lectures offered by the Civil War historian on board. In the evening, a one-hour live performance was offered, ranging from a banjo player to a lounge singer, Dixieland band, and a gospel choir. If there was any criticism, it’s that passengers would have enjoyed more of it.

The caliber of service aboard the Queen of the Mississippi was stellar. From the cabin stewards to the dining room servers and managers, a friendlier, sweeter group of dedicated young people would be hard to find. Even with logistical challenges that occurred on this particular cruise (historically low water levels led to mechanical problems), the crew rose to the occasion and ensured that the guests’ experience was outstanding.

Passenger Ken Fake from Sarasota, Florida, is a member of the Eagle Society, the designation for repeat guests aboard American Cruise Lines’ ships. The company has a high repeat-booking record, with an average of 30 percent of guests booking again. “I like the itineraries and the quality of the group,” said Fake. “People are really friendly. And the accommodations are first-rate.”

True to his track record, Fake booked a third cruise before he’d even gotten back to New Orleans, this time up the Columbia and Snake Rivers in June 2013.

Staterooms: 78, all outside and 66 with balconies

Onboard shopping: One small shop

Itineraries: The Queen of the Mississippi operates over the entire Mississippi River system, with 7-night cruises take passengers as far as St. Paul, Minnesota, on the Mississippi River and Pittsburgh on the Ohio River. Rates begin at $3,995 per person for a stateroom with no balcony and rise to $6,685 for an owner’s suite with a private balcony.