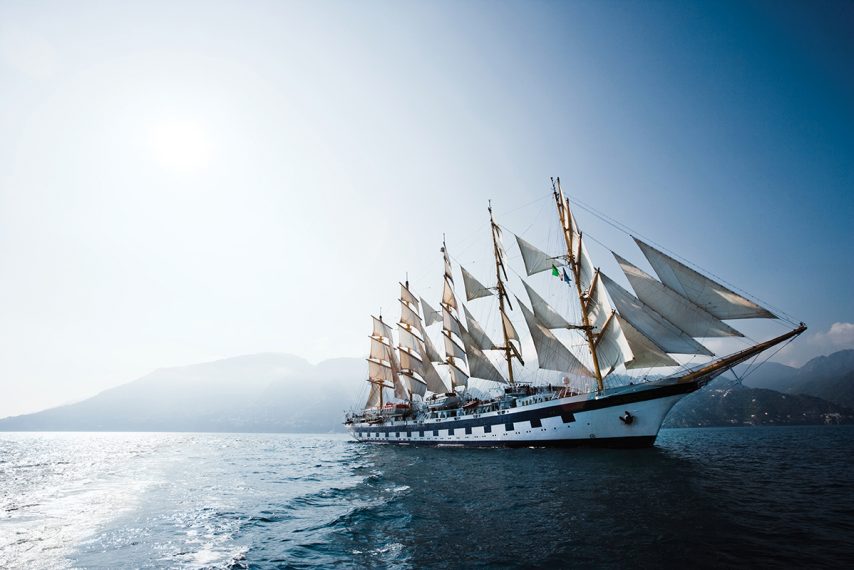 Board one of these sailing ships for a true nautical adventure.

Somewhere between 6000 and 4000 B.C., humans figured out how to use sails to propel ships — and that’s how things were done until the first steamships were launched in the early 19th century. Even then, it took until 1892 before anyone was brave enough to build a steamship without auxiliary sails . . . just in case. So let’s recap: sailing ship history, 6,000 years plus. Engine-propelled ships, less than 200.

Me, I say that kind of venerable tradition demands respect.

Oh, yes, we live in the age of the city-sized super-megaship. And yes, those super-megaships give us all the comforts of home, hopped up with a mainline dose of pizzazz. But what if we want something more . . . simple? Quiet? Old-fashioned? Or should I say, timeless?

Then look to the horizon. See those masts? Those billowing sails? The tall ships are still out there. They never really went away, though they had a few rough decades. Today, they’re everywhere, from the South Seas to the Arctic, plying the waves just like they have for centuries. And you can be, too.

The 20th century was a futuristic time, when progress too often grew from the bones and dust of old and worthy traditions. The century’s first four decades were the golden age of the ocean liner, and the air of limitless potential they evoked proved too powerful an adversary for the lingering romance of sail. By the 1930s, the schooners, brigantines, brigs, and barques that had escaped the scrapyard were in danger of simply rotting away from despair and disuse.

But nostalgia has power, too, and through the ’30s, ’40s, and ’50s, a few stalwart individuals began working to preserve sail travel. Up in Maine, Capt. Frank Swift started in 1936, carrying small handfuls of passengers aboard the 1881-launched schooner Mabel. Over the next 25 years, he saved more than a dozen vessels from neglect and demise, and in the process birthed a regional tall ship revival.

Later, in Europe, a passion for true sailing fueled the salvation of other classic vessels, as well as the birth of new ones. In 1978, German businessman Hartmut Paschberg led a group in rebuilding the 1931-launched Hussar into the luxurious Sea Cloud. In the late 1980s, Windstar Cruises built a trio of new staysail schooners that married the romance of sail and the casual elegance of small luxury cruisers. A few years later, Swedish-born businessman Mikael Krafft built the four-masted Star Flyer and Star Clipper as enlarged, updated versions of a classic 19th-century barquentine design.

Today, dozens of sailing ships — old and new — are in the pleasure cruise business, including large clippers, smaller schooners, and yacht-like modern….