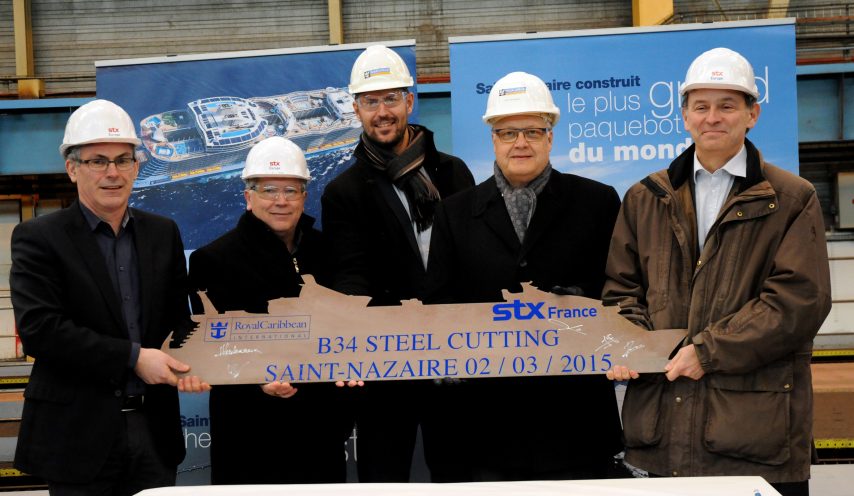 A steel cutting marked the official start of building for the fourth of Royal Caribbean International’s Oasis-class ship, which is scheduled for delivery in 2018. The ceremony took place at the STX France shipyard in Saint-Nazaire, France, where the third Oasis-class ship also is being built.

No names yet for the new ships, which will debut as the world’s largest cruise ships. As with Oasis of the Seas and Allure of the Seas, the new ships are expected to feature seven distinct themed neighborhoods.

Royal Caribbean has been mum on details for the new ships, but noted the earlier ships span 16 decks with 2,700 staterooms and introduced such “at-sea firsts” as a zip line, a handcrafted carousel, the Rising Tide bar (which actually rises), and the AquaTheater high-diving performance venue.

At the same time, Royal Caribbean’s Freedom of the Seas is showing off new dining options and stateroom categories on cruises from Port Canaveral, fresh from a 24-day dry dock at the Grand Bahama shipyard.

Guests can hang out in the new retro-chic R-Bar and eat at new or revamped specialty restaurants including Sabor, Chops Grille: The New American Steakhouse, and Giovanni’s Table.

Popular activities remain, such as the line’s iconic FlowRider simulated surf experience, which debuted on Freedom of the Seas. The ship sails alternating 7-day Eastern and Western Caribbean cruises from Port Canaveral.