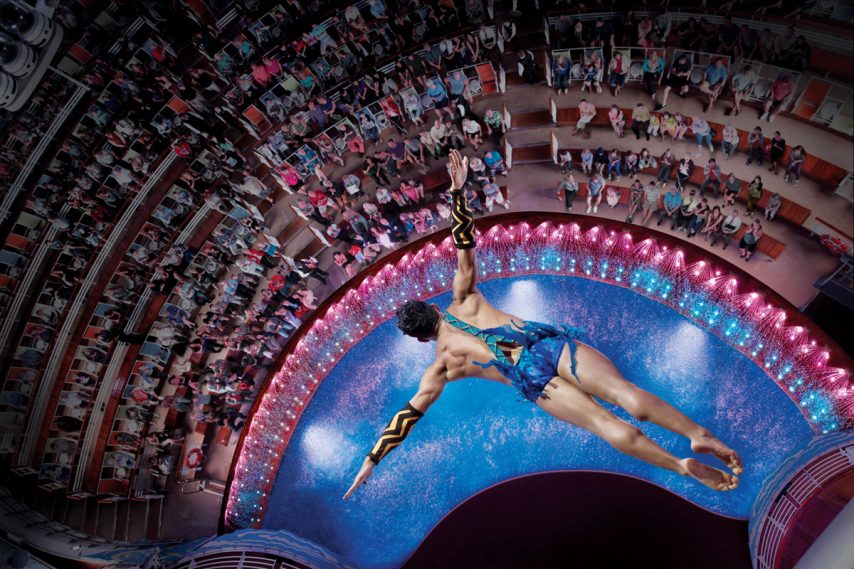 From Broadway shows to aerial artistry, it all begins at the Royal Caribbean Productions entertainment studio.

Mix and match any of 91,400 costume pieces, 5,000 hats, 3,400 wigs, 6,000 shoes, and 3,000 jewelry pieces. Add in props such as a magic wand, top hat, easy chair, or even a motorcycle. Combine those elements with the creative juices of a talented production team and top-notch performers, and presto! — You have a magical entertainment production that tells a story.

No, it doesn’t “gel” on a Broadway stage, a West End theater in London, or a Hollywood sound stage. Rather, the creative razzle-dazzle starts inside the 132,500-square-foot Royal Caribbean Entertainment studios on the Biscayne Bay campus of Florida International University (FIU) in North Miami. Opened in 2015, this sparkling white-and-glass facility represents a unique partnership between FIU and Royal Caribbean Cruises Ltd. (RCCL), parent of Royal Caribbean International, Celebrity Cruises, and Azamara Club Cruises.

Whether the entertainment is a production number, musical solo, Broadway-style show, aerial artistry, or other entertainment genre, the goal is the same — absolute perfection.

It’s mind-boggling. Each night aboard Royal Caribbean’s 24 ships around the world, more than 30,500 entertainers perform for more than 85,000 guests who enter more than two dozen onboard theaters, 11 ice studios, three AquaTheaters, and three Two70 venues, as well as myriad lounges and other shipboard spaces. Cruise passengers are all seeking top-notch entertainment and escapism, and if “maestro” Nick Weir, Royal Caribbean’s vice president of entertainment, has anything to say about it, they’ll get just that.

“Entertainment is made fresh for every ship,” emphasizes Weir. For example, guests enjoy full-blown Broadway shows including Cats, Grease, and Mamma Mia! as well as energetic production shows such as Saturday Night Fever and We Will Rock You, among others.

Since his success of staging Cats at sea, Hollywood, Broadway, and West End theatrical producers have taken notice. “The last three years, my phone has never stopped ringing,” says Weir. “Now, they want to come and play in my sandbox. We’re the cruise version of show business.”

Growing up in a tradition of maritime entertainment (mom a cruise entertainer, dad a cruise director), Weir has also served as entertainment consultant and cruise director for Celebrity Cruises and Costa Cruises, and consulted for Star Clippers. He’s hosted/presented several U.K. television network programs including the Catchphrase re-launch. In fact, Weir recently was invited to join the Producers Guild of America (PGA) based on Royal Caribbean’s Two70 Vistarama/RoboShow and the Ice Show projection.

When Weir joined Royal Caribbean, his first big project was to take the idea of a new entertainment production studio from “maybe we will do it,” to “oh, yeah, you better believe it.’” In fact, “I often tell Michael Bayley [president and CEO of Royal Caribbean International] that he thinks he’s the president of a cruise line, but actually he’s also the president of the biggest entertainment corporation on the planet,” Weir quips.

Cruise entertainment has evolved sizably from the 1980s and 1990s, both in content and approach. Weir recalls that his dad was a performer, cruise director, production singer, and comedian all rolled into one simply because the line didn’t have berth space for another performer. In decades past, he jokes, “the cruise line would say to cruise directors, ‘Be funny, sing, and also run the department.’” Today, however, there’s more specialization and not just from performers, but also from special effects, technology, carpentry, and lighting design experts.

“I’m trusted with a big portfolio,” notes the affable Weir, who clearly loves his job. He regularly reviews guest comment cards, which are much more revealing than in the past, when guests would simply say, “I loved everything on the ship.” Today, he says they might actually say, “I think the actor on the second from the right could improve his diction.” Everyone’s a critic now, Weir stresses, noting that even the captain or hotel director will email him if someone is rushing their lines.