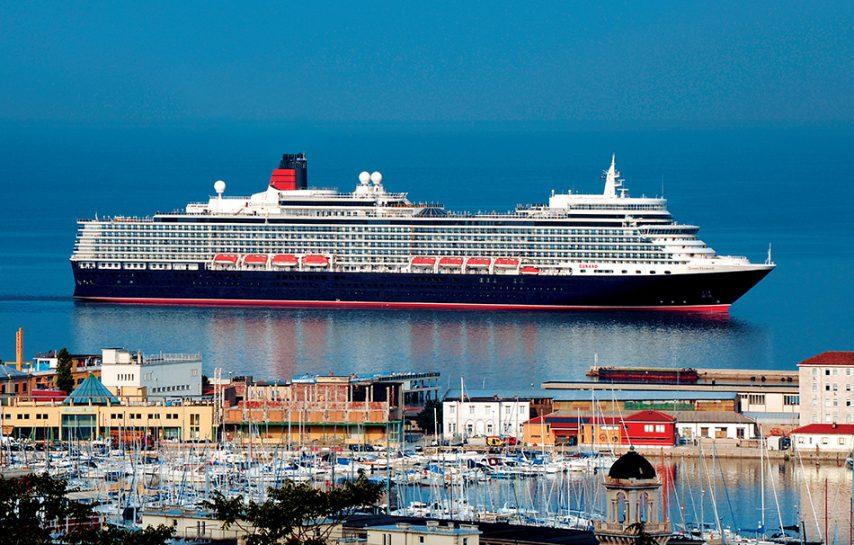 Cunard unveils yet another Elizabeth, and this one is a real queen

By Vivian Holley
Call it a new Elizabethan Age.

Fittingly christened by Her Majesty Queen Elizabeth in October 2010, Cunard Line’s newest vessel — and third to bear the royal moniker — reflects the grandeur and graciousness of her namesakes of times past. Which is saying quite a lot, considering the impressive scorecards of her predecessors.

The first Queen Elizabeth, launched in 1938, was for decades the world’s largest passenger ship, serving nobly as a troop ship during World War II. Queen Elizabeth 2, after a newsy debut in 1969, sailed the seas until 2008, capturing the title of longest-running Cunard liner in history.

With 171 years of practice overall, it’s hardly a surprise that Cunard excels at its game plan of keeping the golden age of ocean travel glamorous, romantic, and, well, civilized via a regal trio that stars flagship Queen Mary 2, sister Queen Victoria, and now the radiant new Queen Elizabeth. Replete with grand-scale public areas, rich wood paneling, mosaics, marbles, and Art Deco flourishes, by design at every turn she pays homage to the previous Queen Elizabeths.

While showing off her share of updated luxuries and all the contemporary comforts of modern cruising, the latest seagoing royal remains happily laser-focused on the storied Cunard heritage that sets it apart from all the others out there. As in, don’t look for climbing walls by day nor flip-flops by night. As on any lively vessel, fun activities abound, from dancing to deck games, crafts classes to whisky-tasting seminars, not to mention well-managed shore excursions. Leading the pack, though, is a particular emphasis on enrichment, with distinguished speakers in the top-notch Cunard Insights program routinely filling every seat in the Royal Court Theatre.

There’s also an element of formality with a strictly enforced dining dress code, most notably in Britannia Restaurant where traditional table assignments and set seating times remain the standard. On the other hand, if you prefer to skip the formal scene, then head straight to the Lido Restaurant, where the daytime buffet switches to table service come evening, with a choice of three regional cuisines for a modest charge.

After sold-out maiden cruises to the Mediterranean and Caribbean, Queen Elizabeth set out on its 103-night Maiden World Voyage in January. I joined the journey for the Curacao-to-Acapulco segment — a 6-day glimpse at life with the latest luminary. Numbered among lucky passengers on board for the full World Voyage were some 800 Britons, 400 Americans, and a smaller international mix that included Germans, Australians, and Japanese.

The distinctive Cunard brand is similarly stamped on accommodations: Choose your stateroom and you choose your own ocean-view restaurant. Suites classified as Queens Grill and Princess Grill are paired with their own Grill Restaurant (single seating, choice of time) positioned in restricted privacy on Deck 11, accessed via your keycard on the elevator. Here, too, is the Grills Lounge and its resident concierge.

Other accommodation categories are also linked to a restaurant, such as the new Britannia Club (single seating, choice of time), and the Britannia Restaurant, the main dining room that spans two decks and evokes memories of classic ocean liners past with its sweeping staircase for, ahem, grand entrances in your best bib and tucker.

What’s sweet about the suites? Take the popular Princess Suite, for example. It comes with 367 square feet of handsomely outfitted space including two beds, a living area, balcony, bath with tub/shower, a walk-in closet, two flat-screen TVs, deliciously comfortable bedding (Sealy unveiled a new mattress created just for Cunard), and refrigerator, plus one complimentary bottle of sparkling wine and one large bottle of water.

Not to be missed is the ship’s new adventure in dining called The Verandah, a treasure that pays tribute to the first Queen Elizabeth where a same-name venue was an exclusively first-class eatery planned “for the pleasures of a waltz between the dessert and the coffee.” The alternative restaurant’s contemporary French menus were created by noted chef Jean-Marie Zimmermann, who leads the company’s multilayered culinary program. What’s rare in the industry is that you can order either the full degustation dinner for a fixed price, or individual items, each priced per plate. Prefer an appetizer and dessert to a full meal? As you wish.

Situated on Deck 2 with ocean views, The Verandah is both chic and cozy, with warm beige-tan tones and glittery mirrored columns, white leather chairs, and whimsical murals. The scrumptious cuisine, fine wines, and expert service are exquisite and well worth the extra charge. Reservations are required.

In addition to the restaurants paired with your accommodations, you’ll find tasty snacks at Café Carinthia and the Golden Lion Pub. If yours is a Grills Suite, don’t overlook the Courtyard, a charmer of a patio alongside the restaurants with umbrella tables for alfresco dining. Steps away is the Grills Terrace for secluded sunbathing.

On Deck 9, the Lido Restaurant rocks around the clock to ensure that no one is ever — horrors! — caught hungry. A bustling buffet by day, it has been much improved by a redesign featuring stations that sidestep congestion.

While favorite meeting spots beckon from the Midships Bar with its displays of memorabilia from the first Queen Elizabeth, to the nautically themed Commodore Club observation lounge, no question that the time and place to see and be seen is the daily signature tea event. Staged in the soaring, two-deck-high Queens Room, accented by crystal chandeliers and backlit Art Deco glass panels, the traditional English tea comes complete with dainty sandwiches and heavenly warm scones, served with jam and cream by white-gloved waiters. Seemingly everyone on board turns out to chat with new friends while a classical quartet murmurs in the background. You can, by the way, return to this elegant spot for an evening whirl around its 1,000-square-foot dance floor.

What else would it be called but the Royal Spa? Which means, of course, that there must also be a Royal Bath House. This new Cunard fixture is a covered space for social relaxation that takes in both the Thermal Suite and the Hydrotherapy Pool.

Day passes are available for those not booking a treatment — but odds are you’ll discover an irresistible service or two among the offerings on the health, fitness, and beauty menus of the 13,000-square-foot, two-level spa. Along with the aquatics area come treatment rooms (including couples’ suites) for customized facials and massages, cellulite reduction, and leg therapy, as well as a full-service hair-and-nail salon with Phyto Hair Cocktails, a Brazilian Blowout to keep you frizz-free for weeks, and St. Tropez Sunless Tanning to send you back home enviably bronzed.

Action central is the appropriately dramatic blue-and-gold Royal Court Theatre, its three decks serving up tiered seating for 832 show-goers. Offerings range from full-blown West End–style productions to opera singers to magicians. Here, too, are the sexy, upper-level private boxes introduced aboard Queen Victoria, a place to be pampered like kings and queens with petit fours and champagne. Need more? Just ring for service via your velvet bell pull.

Afterward, stop by one of the inviting lounges, hit the casino, set sights on the window-wrapped Yacht Club for dancing, and check out the Garden Lounge with its vaulted glass ceiling inspired by Kew Gardens. Impromptu happenings, the likes of Jazz Under the Stars, turn up regularly in the airy Garden Lounge.

Cigar, anyone? Churchill’s Cigar Lounge awaits to cap the evening with cognac and port.

Deck 10 is home to The Play Zone (up to 6 years old) and The Zone (7 to 12 years old), a cheery inside/outside territory in the capable and well-trained hands of British nannies. Supervised age-appropriate activities range from games and stories to arts and crafts and video games. Evenings mean movie time. And yes, children’s tea is scheduled daily at 4:45 p.m. in The Lido (parental supervision required). Oh, the treats!

Photos and paintings join with memorabilia in the Midships Bar and Yacht Club to tell the tale of Cunard’s history-making fleet, including the legendary Queens and the company’s enduring links to the Royal Family. The ship’s two-tiered library boasts not only 6,000 books and a striking leaded glass ceiling but a globe from the era of Her Majesty Queen Elizabeth I.

Particularly fun are the vintage black-and-white photos in Cunarders’ Gallery and around the ship of famous-face passengers from times past the likes of Clark Gable and a young Elizabeth Taylor, Cary Grant and Spencer Tracy, Jimmy Durante, and Abbott & Costello.

Staterooms: 1,046, 85 percent of them outside and 71 percent with balconies

Pools: Two outdoor pools plus a hydro-pool in the spa

On-deck activities: The forward Games Deck, named for the same deck on the original Queen Elizabeth, offers canopied paddle tennis, croquet, and bowls, inspired by England’s oldest bowling green (circa 1299) in the ship’s homeport of Southampton.

Onboard shopping: The Royal Arcade shops on Decks 2 and 3 encompass 4,000 square feet and feature such beloved British icons as Fortnum & Mason and Harris Tweed.

Itineraries: This year, Queen Elizabeth will continue to cruise the Atlantic, the Mediterranean, and the North Sea. In 2012, Cunard will celebrate its 90th year of World Voyages with a repeat performance by Queen Elizabeth: 107 nights, roundtrip Southampton, departing January 10, 2012. North American passengers will have the option of embarking from New York, Fort Lauderdale, or San Francisco after the Panama Canal transit. (Queen Mary 2 will sail a World Voyage as well.)