MSC Seaside shows off its Miami style and outdoor spaces. 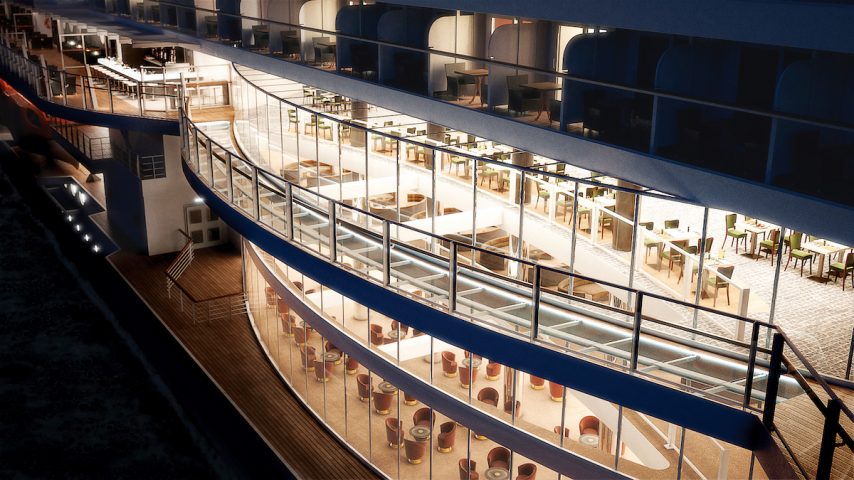 As a journalist covering South Florida’s powerhouse cruise industry for nearly a decade, I’ve explored the ins and outs of countless cruise ships and know what I like and what I don’t, what works and what doesn’t.

Call me a push over, but I instantly fell in love with MSC Seaside, the newest arsenal in Swiss-based MSC Cruises’ quest to capture a bigger slice of the North American cruise market. The line’s newest flagship offers a breathtaking array of open-air spaces and unique design. This standout new ship comes with a cornucopia of onboard offerings aimed at wooing more travelers and is poised to steal the hearts of Caribbean cruisers.

With its sleek curves and chic décor, the ship exudes that “oh so Miami,” vibe, but with a decidedly European flare to keep with MSC’s Mediterranean roots. Aptly dubbed “the ship that follows the sun,” MSC Seaside is turning heads and adding sizzle to Miami’s skyline.

The approximately 154,000-gross-ton ship — the first of MSC’s new Seaside-class of innovative and revolutionary ships — is designed with several signature elements and features to bring cruisers closer to the sea and natural surroundings.

“We wanted a different ship. We wanted a ship with a very specific design that would recall Miami, a ship with a lot of glass everywhere — glass to look through, to look at the sunset in a very unique way, and even glass to walk on,” said MSC Cruises’ CEO, Gianni Onorato, during MSC Seaside’s naming festivities. “There are some very unique characteristics that will make this ship play an important role for MSC and for the North American market.”

Among them is a 360-degree waterfront boardwalk on Deck 8 that wraps around the ship and offers access to a variety of al fresco and indoor dining, lounging, and shopping venues; two glass-floored catwalks for amazing ocean views; exterior panoramic glass elevators; and terraced balcony staterooms with uncovered areas for private sunbathing.

MSC Seaside also features two zip lines (the longest at sea) as well as six public pools. Another architectural wow is the 131-foot-high glass floor Bridge of Sighs catwalk on Deck 16, which offers awe-inspiring views of the ocean and the South Beach Pool below. Its most distinguishing feature, however, is the unique appearance of the condo- inspired aft design, a nod to the hip high-rise lifestyle of coastal Miami.

The 5,119-passenger MSC Seaside has the widest selection of accommodation types of any of its ships, with more than 70 percent with balconies. There’s something to suit every traveler’s needs, as accommodations include interior rooms, connecting balcony staterooms for families of up to 10, staterooms for guests with disabilities, and luxurious suites with private outdoor whirlpool tubs.

MSC Seaside offers more activities for kids and families than any other MSC ship, including a dedicated kids-only buffet restaurant, and the largest Chicco-branded baby club for toddlers under 3 years old; two new LEGO-themed kid’s clubs for ages 3 to 11; and two teen clubs (one for 12-14 year olds and another for 15-17).

Other noteworthy spaces include the Forest Aquaventure Park, a multi-story water park with a first-at-sea slideboarding attraction; four water slides, two with clear loops extending over the ship’s edge; a suspended adventure trail with a rope bridge and nets; and water spray features and play areas for kids to explore.

Kids, families, and friends will also find fun at the ship’s two full-size bowling lanes, virtual games arcade, or even trying out an F1 simulator.

When it comes to dining, MSC takes it up a notch on MSC Seaside as part of its efforts to elevate its culinary chops and improve customer satisfaction in this area, particularly as it strives to win over more American palates. So the ship boasts nearly a dozen dining venues that offer a range of American, Mediterranean, and international cuisine served in a variety of casual to elegant settings.

And your senses won’t be able to ignore the Venchi Cioccogelateria & Coffee Bar, designed in partnership with famous chocolate brand Venchi. From the cascading wall of chocolate behind the bar to the fine chocolate and gelato offerings, it’s a central gathering place to watch master chocolatiers create mouthwatering delights in an open kitchen.

With roughly 20 bars and lounges, options are also aplenty for cruisers to enjoy a favorite beverage or try a new concoction. One standout locale is the swanky Champagne Bar on Deck 7, which serves a selection of bubbly, champagne cocktails and sparkling wines as well as seafood and caviar bites. Other popular hangouts to grab a drink or a game include the Sports Bar, which features an impressive collection of sports memorabilia, and the Garage Club, the ship’s fun auto retro–style nightclub.

But MSC Cruises has even more new ships on the horizon, and another already earmarked for North America: the 5,714-passenger MSC Meraviglia, which launched in June 2017 in Europe will move to New York in October 2019 for three sailings before repositioning to Miami later in 2019 to also offer year-round 7-night cruises to the Caribbean. “We are going to become mainstream,” said Pierfrancesco Vago, MSC Cruises’ executive chairman. “We are committed. North America here we come.”

MSC is also aiming to extend its tradition of award-wining entertainment on MSC Seaside with a roster of seven new Broadway-style shows in its 934-seat Metropolitan Theater. These include Timeless, which chronicles the escapades of a time traveling eccentric scientist; My Life in Music, a showcase of famous movie soundtracks; and The Wizard, which features stunning illusions. Improvised comedy shows will also debut on board in partnership with BeerProv, a North American company known for hilarious unscripted sketches.

In addition, MSC Seaside also showcases the newly launched MSC for Me digital concierge program, which uses interactive bracelets and a dedicated mobile app with way-finding, vacation planning tools, and an online personal adviser to help guests navigate the ship, locate their children, and book excursions, dining times, and other onboard services.

With its arrival stateside, it’ll be exciting to see how MSC Seaside, built with Miami in mind, will sail the world’s most popular cruising ground.

Click here for a chance to win a free cruise on MSC Seaside!

To read more about your favorite ships, subscribe to Porthole Cruise Magazine.