Cabin Fever. From poky inside staterooms to the luxury of a doorbell, there’s no place like your home on board.… 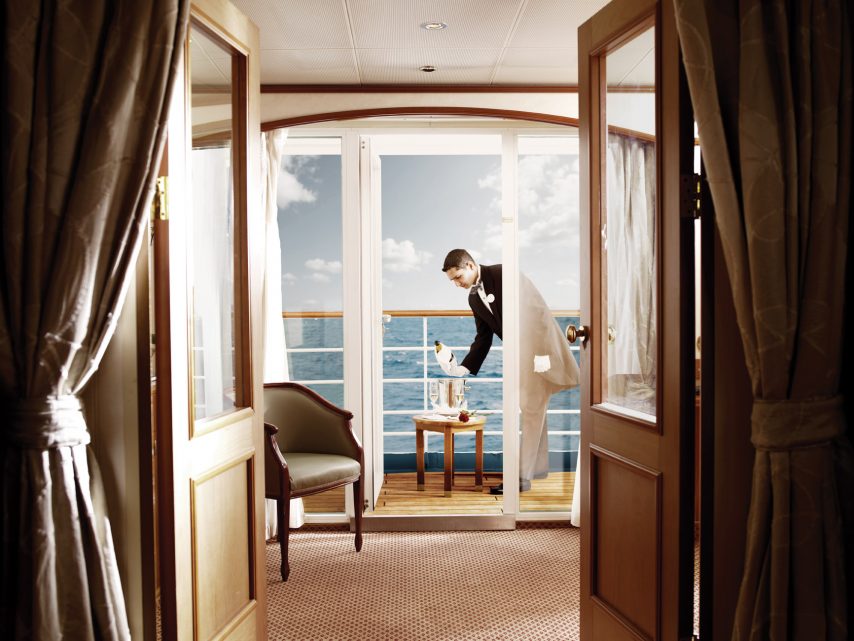 From poky inside staterooms to the luxury of a doorbell, there’s no place like your home on board.…

From yesteryear’s humble inside upper and lower, I have risen phoenix-like to the extravagance of spacious balconies, full bathrooms (with tubs!), little refrigerators, en suite bars, walk-in closets, and, on several occasions, even a cabin doorbell.

Now, from my childhood home to my current one, I can’t recall ever not having a doorbell. So while my recent Silversea Cruises’ suite doorbell didn’t exactly represent the realization of a lifelong dream, it somehow suggested “I’ve arrived.”

Veteran cruisers never tire of comparing yesterday’s ships with those of today, bemoaning the loss of the vessels’ classic lines, the traditions and elegance of days gone by. However, I’ve yet to hear any of them yearn for the tomblike inside cabin, the Spartan bathroom with the little ashtray/bottle opener thing attached to the toilet paper dispenser (what was with THAT??), and the little ceiling fan that was expected to cool the cabin even during the steamiest days of a Caribbean cruise.

My first glimpse of the future of the cruise ship cabin came during a 1983 inaugural sailing aboard Holland America Line’s Nieuw Amsterdam III and my introduction to the vacuum toilet. Prior to the vacuum toilet, you’d have better odds of a flush at the ship’s casino than you would in your cabin. With my jeans around my ankles, I pressed the button and was at once terrified and dumbstruck as the explosion assaulted my ears and threatened to suction my butt through the seat. (Even today, flushing one of these babies triggers in me a mild — but very real — moment of trauma that is only relieved when the explosion subsides, the bowl refills, and calm is restored.)

Since that time, changes to the cruise ship cabin have come fast and furious. Until now, cabins have been transformed from simply somewhere to sleep to luxurious living quarters that you actually want to spend time in. Adjustable temperature controls, interactive TV, sitting areas, iPod docking stations, balconies, and spa-like bathrooms are just some of the enhancements that make your cabin feel like home — or even better, considering room service.

When it comes to the cruise ship cabin, the only thing that hasn’t changed over the years is its occupants. Whether we’re in an inside, an oceanview, a suite, or a penthouse, we’ll continue to lose our key between the love-seat cushions, never completely figure out how to use the TV, and never know, until the final night of the cruise maybe, which light switch lights which light.