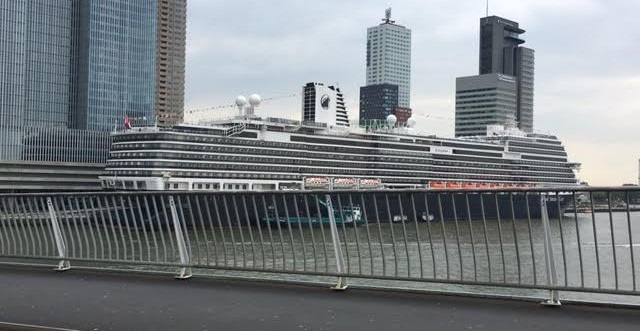 Her Majesty Queen Máxima of the Netherlands christened Holland America Line’s new Pinnacle-class ship, ms Koningsdam, during a ceremony aboard the ship in Rotterdam this morning. The event continued a long-standing tradition of members of the Dutch Royal Family launching Holland America Line ships.

The 2,650-guest Koningsdam is the first in a new class of vessel for the line, boasting several new features including entertainment venue Music Walk, which is made up of Billboard Onboard, Lincoln Center Stage, and B.B. King’s Blues Club; BLEND, a unique hands-on wine-making venue; and music-inspired interior design by famed designer, Adam D. Tihany.

During the ceremony were words by Captain Emiel de Vries as well as a performance by singer and harpist Iris Kroes, who performed at the World Stage. In addition, Holland America Line president Orlando Ashford announced the name for Koningsdam’s Pinnacle-class sister: Nieuw Statendam (2018).

[VIDEO: See what Orlando Ashford told Porthole Cruise Magazine he most looks forward to aboard Koningsdam.]

Koningsdam will spend the summer sailing from Amsterdam to Norway, the Baltic, and Iceland before repositioning to Fort Lauderdale, Florida, in November for winter and spring Caribbean cruises.