A Balcony Room on board Crystal Serenity | Photo: Crystal Cruises 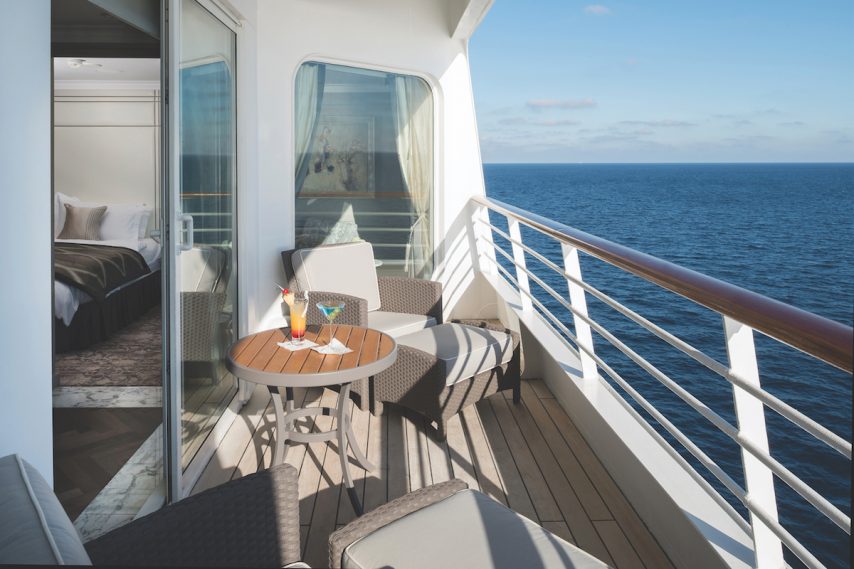 We’ve been asking cruising from all over the world to share their cruise stories and our readers have emailed, tweeted, commented and videotaped themselves sharing their favorite cruise memories from over the years and many shared a positive outlook for the future of the industry. The stories and memories have been getting us through and we thank everyone who participated.

Today, we have two stories from readers who shared their love for their favorite cruise lines!

I’ve been inordinately blessed to have been cruise traveling since before I was even two years old. Now, I’m a lucky 36-year-old millennial that has taken over 150 cruises. In that time I’ve sailed on the original 1984 Royal Princess christened by Princess Diana, seen the fascinating construction of brand new ships like the Disney Fantasy, witnessed the boom of river cruising and been there to see the start of expedition cruising’s modern evolution. I look forward to the next 36 years of cruise travel and have no intention of slowing down.

Nothing will keep us down.

“It’s a tease!” cried my husband, when I asked him to accompany me to San Pedro, California on departure day of Crystal Cruise’s 2014 world cruise.  “Why would I want to board a ship only to be kicked off hours later?” he asked.

Hmm.  Good question.  Because he gets a great lunch?  That worked for me.

Since he’s a kind guy and it wasn’t football playoff day, he agreed.  So that January 18th, we took the drive from Los Angeles to the World Cruise Center south of of the city. As we pulled into the parking lot, we could see Crystal Serenity sparkling in the sunlight.  I felt a flutter in my stomach. Silly girl, I thought. You’re not going anywhere.

We went through a boarding process similar to passengers.  We, however, had to don passes noting our visitor status. Really, was there a need?  Spotting true passengers was easy. They looked so relaxed. Like they had an IV drip of Xanax, or listened to Perry Como while working out.  Many knew each other. Most looked like Crystal Cruises regulars, strolling with confidence, as if Serenity was their second home. (For some, it probably was.)

All wore looks that said, sunny skies ahead. Visitors (passenger family members; travel agents, press) looked like, well, working people.  Checking their watches. Like they may have to do laundry later, go grocery shopping or get gas.

Passengers looked like they had all the time in the world.  And they did. When their 89-day voyage set sail, they were embarking on an exotic meander through China, Southeast Asia and Africa before ending in London on April 18th.

That sounds like an insane amount of money.  But if you break down the published rate of $39,480.00 for the least-expensive accommodations (still very cushy on Serenity) to a per-person per-day rate, it average about $443.00.

We peeked into one of the Crystal Penthouses, part of a recent $17 million ship redo. I had to drag my husband out by the arm.

I told him a media companion – which probably makes him the lowest on the totem pole, just beneath me – can not openly behave like he wants to move in.  “Don’t drool in someone else’s suite,” I hissed. “Not appropriate. Do it in the car on the way home.”

Throughout lunch, my attention wandered.  Not that the food wasn’t good. It was. But my eyes kept drifting to the passengers.  I fantasized about how I would feel embarking on a world cruise. No counting cruise days (Only four left!  Oh no, our vacation is half-over!). Imagine 89 days seeing the world sleeping in the same bed – and someone else washing and changing your linens.

In the atrium, Crayola-colored balloons hugged the ceiling, waiting to drop when the ship set sail. “Remember when we took a holiday cruise onboard Crystal Serenity?” I asked my husband. “Remember the balloon drop on New Year’s Eve?”

I flashed back to our joyful crowd on the packed dance floor a few years back.  Elderly ladies with misty eyes sat in a row close to us. Perhaps they were remembering exciting New Year’s Eve celebrations long ago.  They smiled approvingly, clapping their hands, happy in our happiness, happy they were alive spending another holiday on a cruise ship.

I’ve sailed a few times on Crystal Cruises over two decades (the line celebrates its 25th anniversary in 2015), and I, too, have memories.  Of being newlyweds, sailing into Venice for the first time. Of dancing an impromptu waltz on the Promenade Deck departing Mykonos, dizzy from twirls, drunk on happiness.  Feeling overwhelming love and gratitude when my husband surprised me with pearls from Grand Cayman on a cruise after major surgery.

We debarked Serenity when the passenger lifeboat drill commenced.  And we were okay with that. Maybe we weren’t going on a world cruise.  Maybe we never will. But as we walked to our car, hand-in-hand, we realized we were back on land with a sea of Crystal memories.  And sometimes, some days, that is enough.