Seen throughout Alaska, the matryoshka nesting dolls are as poignantly meaningful as they are increasingly adorable. 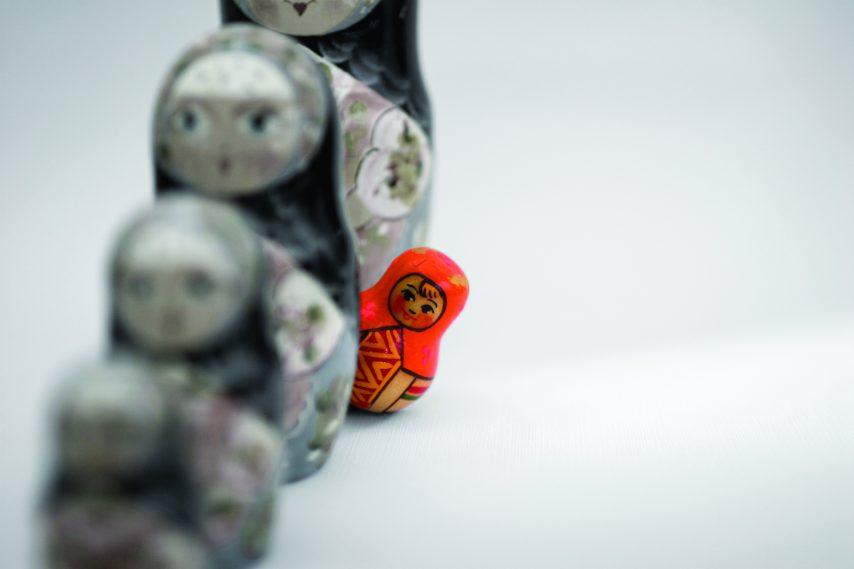 Matryoshka dolls are an instantly recognizable symbol of Russia. They can take on many forms, but are always a series of wooden dolls of decreasing sizes that fit one inside the other, typically painted to represent either traditional Russian folklife or more topical or satirical themes.

It has been speculated that the matryoshka dolls are inspired by artifacts from East Asian culture such as the Japanese Honshu dolls, which sometimes take the form of round hollow dolls depicting Buddhist monks, but are sometimes nesting dolls that portray the Seven Lucky Gods of Japanese belief. However, Russian master craftsmen were already creating hollow wooden Easter eggs long before the nesting dolls became popular, so they may have developed independently in Russia.

The first recorded matryoshka doll set was carved in 1890 by wood craftsman Vasily Zvyozdochkin from a design by folk crafts painter Sergey Malyutin, who also painted the dolls. They were created at the Children’s Education Workshop in Abramtsevo, which was founded to make and sell children’s toys by Anatoly Mamontov, the brother of Russian industrialist and patron of the arts Savva Mamontov.

Alaska and Russia share a border; at their closest point in the Bering Strait, they are less than three miles apart. There are active Russian Orthodox churches in around 80 Alaska communities, many of which still use the old Russian Orthodox calendar and celebrate Christmas on what is January 7 on the Western calendar. These Russian Orthodox “Old Believers” often speak an archaic form of Russian called Old Church Slavonic, which dates back to before the American purchase of Alaska in 1867, and wear traditional Russian clothes that they makes themselves, such as the sarafan, a long shapeless traditional dress famously worn by the matryoshka.

Stephen Grasso is a freelance writer and world traveler currently based in Hialeah, Florida, previously from London, UK, and originally from Newcastle. He writes about music, film and culture, and is working on his first novel.

View all posts by Stephen Grasso