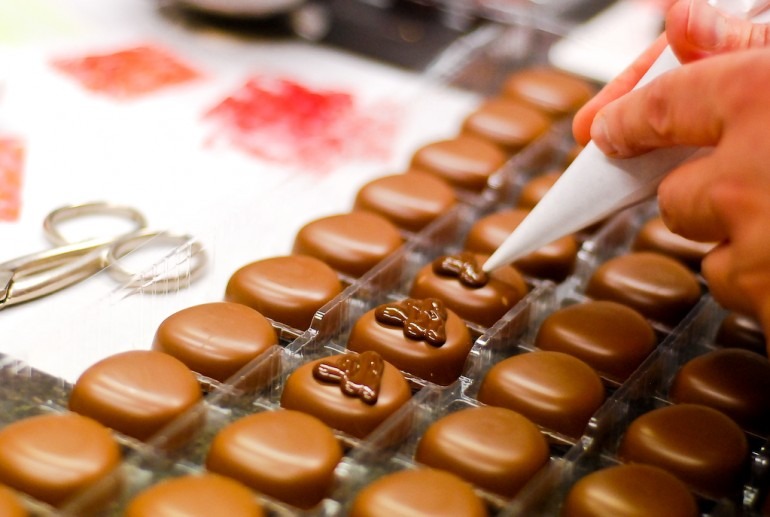 For those of us who’ve been bitten by the chocolate bug, this is serious business — even globe-spanning. From the cacao tree’s original home in South America, its seeds have spread far and wide, used in everything from facial masks to fried chicken (really, don’t click that). There must be as many different ways to enjoy chocolate as there are cities in the world, with unique traditions sprouting up everywhere people have taken their first nibble of a rich mousse or a sticky brigadeiro, their first sip of a frosty chocolate shake or a steaming Swedish white choklad.

Here are our five favorite ports of call dedicated to the dark, bittersweet truth: Chocolate rocks.

Brussels
The capital of the European Union is possibly the best city in the world for chocolate lovers, and there is no power on Earth that will keep travelers from enjoying its charms. (L’Union fait la force, Belgian friends.) Usually, it’s the old town of Brugge that’s highlighted on cruise itineraries, but modern Brussels is home to internationally celebrated companies such as Godiva and Leonidas and has the distinction of having the most chocolatiers per square foot of any city in the world. Dark and bracing, milky smooth, white and creamy; in bars, in truffles, on crisp cookies or light pastries, any way you can imagine chocolate, it’s served here. Do not miss the Musée du Cacao et du Chocolat de Bruxelles — the Brussels Museum of Cocoa and Chocolate.
Livorno

Yes, sure, there’s pizza, there’s gelato, there’s cannelloni – but Tuscany’s greatest contribution to la dolce vita is The Chocolate Valley, a triangular region between Pisa, Florence, and Prato where award-winning chocolatiers like Amedei, Trinci, Slitti, and De Bondt (now at San Martino 82) have redefined the bittersweet joys of cioccolato. There are bonbons and pastries, and special, aromatic bars that include flavors such as peperoncino, ginger, coriander, bergamot, and rose. This is also the region where the best Chiantis are bottled, so enjoy finding the perfect pairing.

The volcanic island is beautiful to see, with a rain forest and twin mountains that provide a luxurious backdrop to exclusive, world-class resorts and spas. It’s also one of the few places where chocolate is grown and processed right on site into some of the most potent, flavorful treats ever wrapped in frilly paper and sealed (temporarily) in a box. Hotel Chocolat offers a plantation-to-plate tour, allowing you to walk among the cacao trees, see the beans drying in their trays, and then learn new ways to savor fine chocolate’s sight, smell, and sound … yes — the snap of a bar is an indicator of quality … in addition to its flavor.

The first chocolate-making machine was invented here, after Spanish explorers brought cocoa from the Americas. Barcelona’s Chocolate Museum — Museu De La Xocolata —celebrates this legacy of chocolate as well as teaches new ways to work with the sweet stuff such as making your own truffles, pairing different types of chocolate with wines and brandies, or even creating edible paintings and sculptures. Elsewhere in the city, chocolate and churros — fried cinnamon pastries with melted chocolate for dipping — is a popular favorite at cafés and bakeries.

Chocolate isn’t just for eating. Hot cocoa might seem like the perfect drink for frosty mornings in a northern Christmas, but some of the first mugs of cocoa in history were served in the Mexican state of Oaxaca. In this Pacific resort city, you’ll find savory mole sauces and sweet cinnamon-almond drinking chocolate, stirred with a wooden molinillo. Less traditional, but no less indulgent, is a chocolate milkshake whipped up at the landmark Chocolate Mayordomo shop in Oaxaca City, or Mayordomo chocolate tablets sold throughout the region.

Let us know your comments!
#chocolate#destinations#food