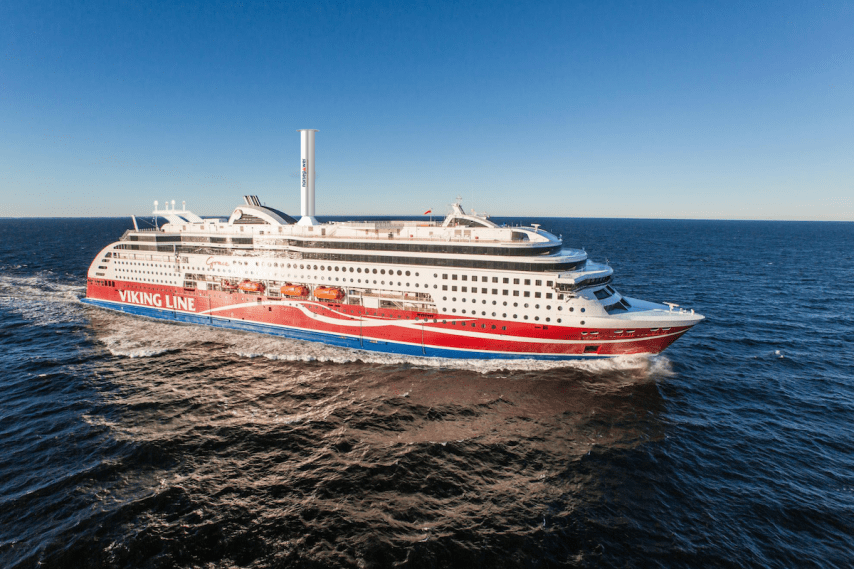 The ferry-cruiser Viking Grace has become the world’s first passenger ship to capture wind power with a high-tech rotor sail, a cylindrical device that propels the ship by spinning.

Viking Line, the Baltic company based in the Åland Islands, already had a reputation for ecologically friendly travel. Since 2013, Viking Grace has been fueled with low-emission Liquefied Natural Gas. With the new rotor sail, the ship expects to reduce CO2 emissions by 900 tons a year.

The device, a spinning cylinder 79 feet tall and 13 feet across, relies on the Magnus effect: as it spins, passing air flows with lower pressure on one side than on the opposite side. The difference in pressure is what helps propel the ship, similar to the backspin on a golf ball. The principle has been known for more than a century, but it wasn’t until five years ago that the Finnish firm Norsepower Oy Ltd developed one capable of being used on a modern ship. The

“As an Åland shipping company, we rely on the sea for our livelihood so it’s of prime importance for us to promote the well-being of the sea”, explains Jan Hanses, CEO of Viking Line. “We want to pioneer the use of solutions that reduce the environmental load.

“Norsepower has developed a world-class mechanical rotor sail solution that will reduce fuel consumption. We’re proud of the fact that our Viking Grace will be the first passenger ship in the world to benefit from this innovative solution.”

Two similar rotor sails, doubling the power output, will be installed on the line’s newest ship, currently under construction in China and due to be operational in 2020.