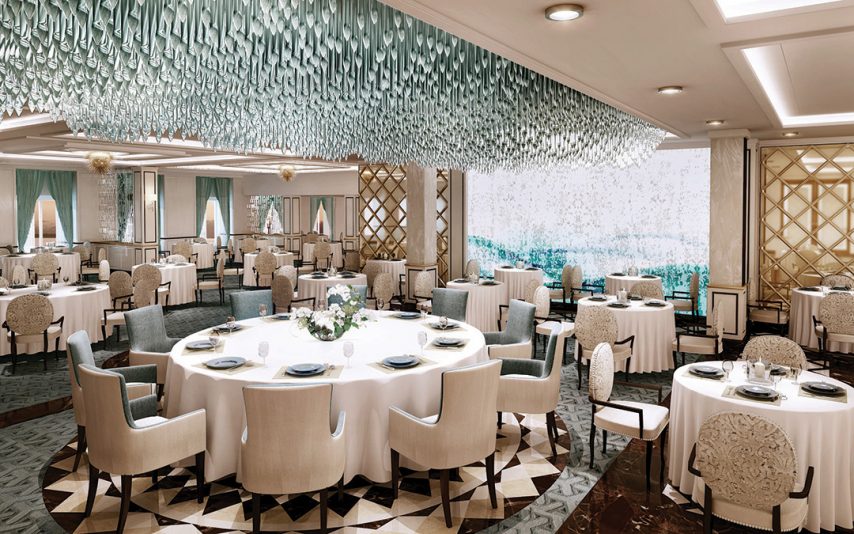 As you wander your way around a cruise ship, sometimes it pays to look up. Strategically placed chandeliers provide more than just brightness. The light not only creates mood, but the often-immense fixtures are often themselves objects of artistic beauty.

Designing lighting for cruise ships is no easy task. The chandeliers need to be able to function on moving ships under harsh sea conditions. Chandeliers that swing, for instance, would be a problem.

“Things that you really take for granted on land you have to think about carefully at sea,” said Adam D. Tihany, the famed New York–based interior designer whose work can be seen on ships including Holland America Line’s new Koningsdam and Seabourn’s Seabourn Encore, which debuts in December.

On the musically themed Koningsdam, for example, dramatic chandeliers with strings of tri-color hand-blown glass bulbs catch your eye in the bright, modern, harp-inspired dining room, which has a golden glass wine tower as its centerpiece.

Lighting companies that specialize in maritime outfitting take on the task of turning designer creations into reality on ships. The Czech company Preciosa Lighting, for instance, is known for its hand-blown Bohemian glass and has created stunning chandeliers for Disney Cruise Line, Royal Caribbean International, and Norwegian Cruise Line, among others.

Preciosa uses a four-step safety test for maritime fixtures that involves re-creating conditions on computer software, tests for vibration, seeing how materials react in a humid salt chamber, and seeing how the chandeliers perform during a ship’s sea trials.

“We don’t want to limit our partners, but rather let them design what they feel is the right lighting/sculpture and then we add our technological knowledge,” said Adámková.

These massive creations can get quite extravagant. In the atrium on Disney Dream is a cascading, 13-foot, 24-karat gold-plated art deco chandelier with 88,680 crystal beads. Sister ship Disney Fantasy’s atrium chandelier is Art Nouveau–inspired, cascades down from a massive, illuminated flourish inspired by peacock feathers, and boasts more than 60,000 Swarovski crystal beads.

A fantastical chandelier with free-formed shapes in vibrant colors by world-renowned glass artist Dale Chihuly lights the atrium of Disney Wonder (a Chihuly on Disney Magic was replaced during a 2013 ship redo with a more subtle, Art Deco creation).

Chihuly fans can also view his works on two Celebrity Cruises ships: a red and yellow glass chandelier outside a lounge on Celebrity Constellation and a subtler frosted white chandelier in a quiet stairwell mid-ship on Celebrity Infinity.

Other designers of note have had a hand in shipboard light creations. Ralph Lauren, for instance, designed the chandeliers in…