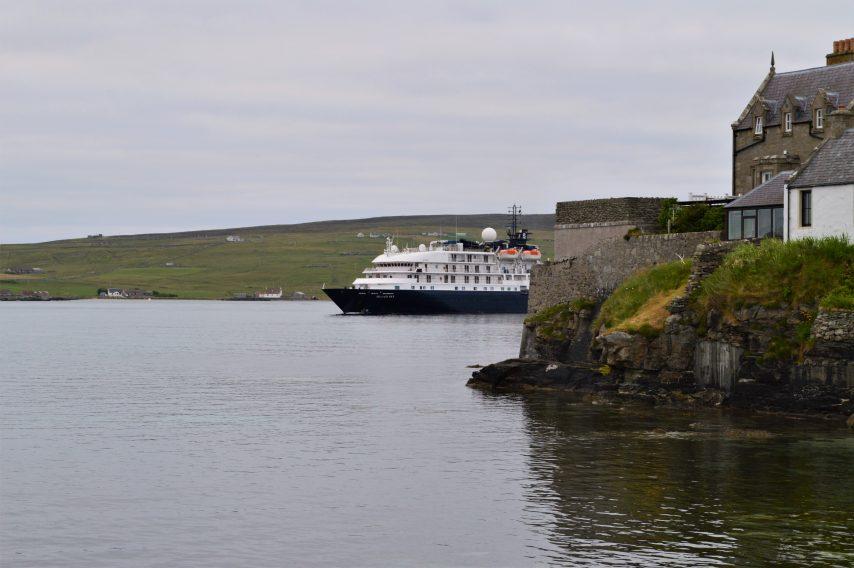 The very first cruise ship returned to the shores of Scotland yesterday, the first call on the country since the start of the pandemic. With 66 passengers on board, MS Sky Island operated by Noble Caledonia called on Lerwick Harbour, Shetland, one of 16 ports now open to cruise ships. Lerwick Harbour is part of the Shetland Islands which lie just north of mainland Scotland.

“Over the last year, the cruise sector has worked tirelessly with the Scottish and UK Governments and industry partners to develop and strengthen health and safety measures which now exceed those of any other travel sector and are the result of extensive collaboration,” said Rob Mason, Chairman of Cruise Scotland. “The decision to resume cruise is a welcome encouragement for our Scottish ports and harbours with the wider supply chain now able to recommence operations, welcoming UK sailings and UK passengers only, after a period of nearly 18 months following a voluntary suspension of visits in March 2020.”

RELATED: Cunard Will Sail Queen Elizabeth in the UK This Summer

Cruise lines were thrilled to hear Scotland was reducing their COVID-19 restrictions to “Level 0″ after the country briefly banned ships in June. Many lines had planned itineraries featuring Scotland after the United Kingdom lifted cruise ship restrictions in May.

‘‘The health and well-being of passengers, crew, shoreside staff and the communities visited are paramount, and the current protocols have already been extensively tested as almost 600,000 people have sailed on cruises since last summer elsewhere around the globe, which includes many English ports and harbours since May of this year,” Mason continued. “Collectively and individually, the Cruise Scotland membership place great emphasis on the safety of local communities which are a key part of the industry and will share in the recovery.”

Today, MS Sky Island called on the port of Montrose on mainland Scotland and all reports are that everything is going smoothly! Passengers are able to disembark the ship to visit Glamis Castle on a pre-arranged shore excursion.

Have you cruised to Scotland? Let us know in the comments!