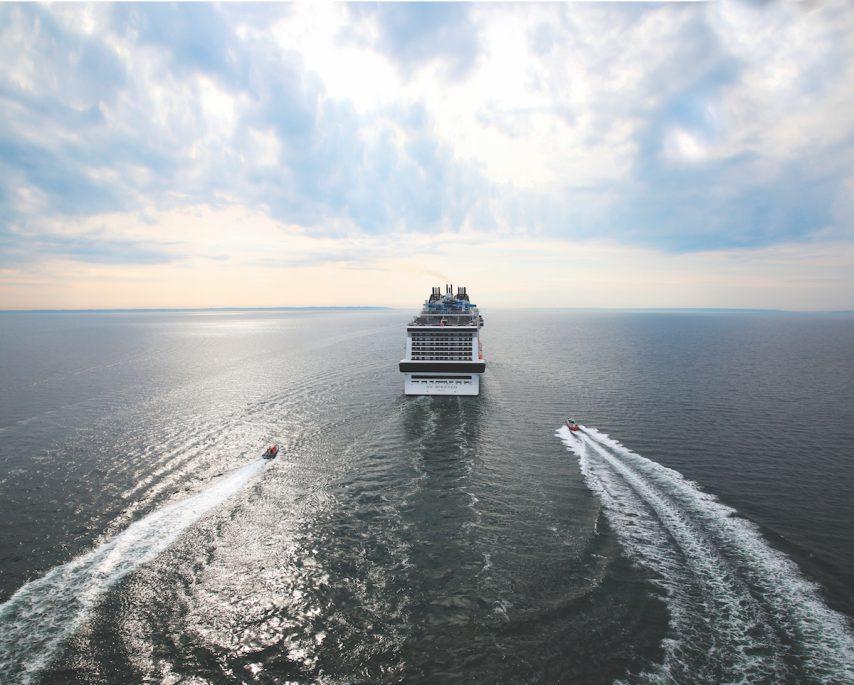 Though it’s one of the leading cruise lines in Europe (not to mention South America and South Africa), MSC Cruises isn’t yet a household name in North America. But the Swiss-based, privately owned cruise line has been aiming to change that.

It started when MSC Divina was introduced to the North American market in 2012, continued with MSC Meraviglia, christened by the ever-glamorous Sophia Loren in Le Havre, France, in June 2017, and will continue even further with the upcoming debut of MSC Seaside in December (see sidebar). After sailing the Mediterranean and Northern Europe, MSC Meraviglia will turn her prow toward North America in 2019, joining MSC Divina and MSC Seaside in Miami, where this triple threat is sure to make a splash.

MSC Meraviglia is the first in a new generation of ships for MSC, one of 11 launching by 2026. Building on its deep maritime history as the Mediterranean Shipping Company (MSC), the line is designing its new fleet around technology that travelers have come to count on to make the most of their vacation as well as a closer connection to the sea.

The name of the ship (pronounced mehr-ah-vee-ya) means “wonder” in Italian, and wonder she sparks. Not just with her mammoth size, but with the dazzling 5,000-square-foot LED dome in the two-deck inside promenade; the intimate Cirque du Soleil at Sea dinner theater; and the game-changing smart ship technology, MSC for Me.

Even if you didn’t know that “Mediterranean” is part of the line’s name, you’d get that vibe from the moment you step on board. Reminiscent of the lovely strolling boulevards of the Med, the 315-foot-long promenade sets the stage for that experience. High-end boutiques (we’re talking Armani and Gucci) and decadent dining options lure you in while the ever-changing shows on that LED sky screen — “Look, it’s the Sistine Chapel! Wait, it’s an under-the-sea fantasy! — entice you to linger.

Glitz and glamour are plentiful (i.e. those signature Swarovski staircases), but sumptuous rather than overdone design wins the day with rich fabrics and restrained use of dramatic color that’s parlayed where it makes the most impact, such as in the crimson-splashed casino. Each of the 19 decks is named for a wonder of the world, so look for art depicting the likes of Angkor Wat, the Eiffel Tower, and the Taj Mahal.

Staterooms are a restful retreat, at 205 square feet for the plentiful balcony cabins. But accommodation options, much like the rest of the MSC Meraviglia experience, are flexible. Families can opt for modular joining staterooms sleeping up to 10, or maybe the duplex suite at 560 square feet (plus large balcony with whirlpool bath). The spectrum ranges from 130-square-foot studio cabins for solo travelers to the plush suites of the Yacht Club (up to 700 square feet), which include butler service. Altogether, 2,244 staterooms can sleep up to 5,714 passengers.

A dozen distinct dining venues range from fine Italian to a classic steakhouse, and MSC is mixing things up with its new Flexi Dining style, which allows guests to pre-select a time slot for dinner in the sophisticated main dining rooms, but also have the ability to change that time on a whim. Traditional two-seating dinners are also still available, and Yacht Club guests, who dine in their own dedicated restaurant, choose from free-time dining or reservations.

Casual dining is available in the airy Marketplace Buffet (where an emphasis on fresh, locally inspired fare makes a quick lunch shine with ingredients like fresh-made mozzarella) as well as at the Atmosphere Bar South where poolside classics including pizza and burgers rule the day.

Specialty restaurants on board MSC Meraviglia, which offer à la carte pricing, include Butcher’s Cut modern American steakhouse; the new Kaito Teppenyaki and Sushi Bar concept starring Japanese cuisine; and Eataly – Ristorante Italiano, featuring fine Italian cuisine as well as a sumptuous Chef’s Table experience. Other decadent treats include the Jean-Philippe Maury Chocolaterie where you can watch (and smell!) fabulous concoctions being created by chocolatiers in an open kitchen, and a very popular Crepes and Gelato shop is available for more sweet-tooth moments.

MSC Seaside is set to shine in Miami.

Known already as “the ship that follows the sun,” MSC Seaside is set to debut December 21, 2017, to sail year-round from PortMiami to the Caribbean. The revolutionary new ship will be the first MSC Cruises’ ship to head directly from the shipyard to the United States and the first MSC ship to be christened in the United States.

Ship highlights include new open-modular connected staterooms for large families or groups that accommodate up to 10 people; an enhanced MSC Yacht Club “ship within a ship” concept offering added exclusivity and privacy; a two-deck glass walled atrium and panoramic exterior elevators, with the aft of the ship resembling a Miami Beach high-rise condominium; and a 360-degree seafront promenade designed to bring guests closer to the sea.

Onboard entertainment and activities include an interactive Aqua Park, the first at sea to feature interactive Slideboarding technology, which combines a unique water slide and an interactive video game all-in-one; two decks of activities, including an adventure trail and four different water slides; six pools, including a 27,500-square-foot main pool and an aft pool with breathtaking sea views; two unique outdoor catwalks that extend beyond the edge of the ship, with all glass railings and a glass floor; an interactive 5D Cinema, which includes moving seats, special effects, and guest interaction; a full-sized bowling alley; two of the longest zip lines at sea; a dedicated kids-only restaurant and dedicated LEGO- and Chicco-designed play areas; and a wide choice of indoor/outdoor dining including 11 distinct dining venues featuring cuisines from all around the world.

Cruisers with a health focus will be happy to hear about the Wellness Experience, which features healthful dining options at every meal. And stop by Bamboo Bar for a vibrant, healthy juice or smoothie (I loved the zesty Green Power).

And whether your drink tastes run to a frothy pint or a perfectly chilled glass of Champagne, you’ll have no shortage of choices — 20 in fact — when it comes to cocktail hour. My favorite was the Meraviglia Bar & Lounge where craft cocktails have clever names (try the Je Suis St. Germaine). The Sports Bar and the Brass Anchor Pub offer low-key hangouts, while you might want to hit the glamorous Sky Lounge or Horizon Bar for an elegant cocktail.

The runaway star on this ship is certainly the fantastical Cirque du Soleil experience in the purpose-built Carousel Lounge, which was designed as a dining venue that hosts exclusive shows by the world-famous Cirque du Soleil every evening. At night, the space becomes a lively disco.

Cirque du Soleil set out to create two very different, contrasting shows, each with a different concept, ambiance, storyline, costumes, and make-up. With two 40-minute performances each night, six nights a week, guests will have the opportunity to see both productions: Viaggio is the story of a passionate and eccentric artist who hears the call of his Faceless Muse, and Sonor takes guests on an auditory adventure with dancers, acrobats, and characters, all moving to the rhythm. (Cirque du Soleil shows must be pre-booked and feature an extra charge.)

In addition, Broadway-style shows — some featuring a live band — take place three times nightly, making it a breeze to catch dinner and a show. And 24 hours a day you’ll find shows on the promenade’s sky screen.

Sun worshipers will gather at the elegant South Beach–inspired main pool or Horizon Pool, and as an all-seasons ship, MSC Meraviglia also boasts a sliding dome over the indoor pool.

The younger set (and anyone with an appetite for adrenaline) should make for the amusement park where they can go head-to-head in F1 racecar simulators and take on zombies in a 4D theater, or up to the Polar Aquapark and the Himalayan Bridge zipline. Littler ones have their own zone on the ship with seven fun areas segmented by age group — and parents can easily geo-locate their kids using the MSC for Me app, which also let’s you browse dinner menus, make a reservation and follow wayfinding directions to get to the restaurant; unlock your cabin door and make purchases with the wristband; check out and book shore excursions on digital screens throughout the ship; and even find the nearest restroom. It’s a whole new way of cruising and it’s the wave of the future for MSC. Every one of its new ships will feature this cutting-edge technology all designed to make things easier for you.

Because after all, isn’t that what vacation is about?