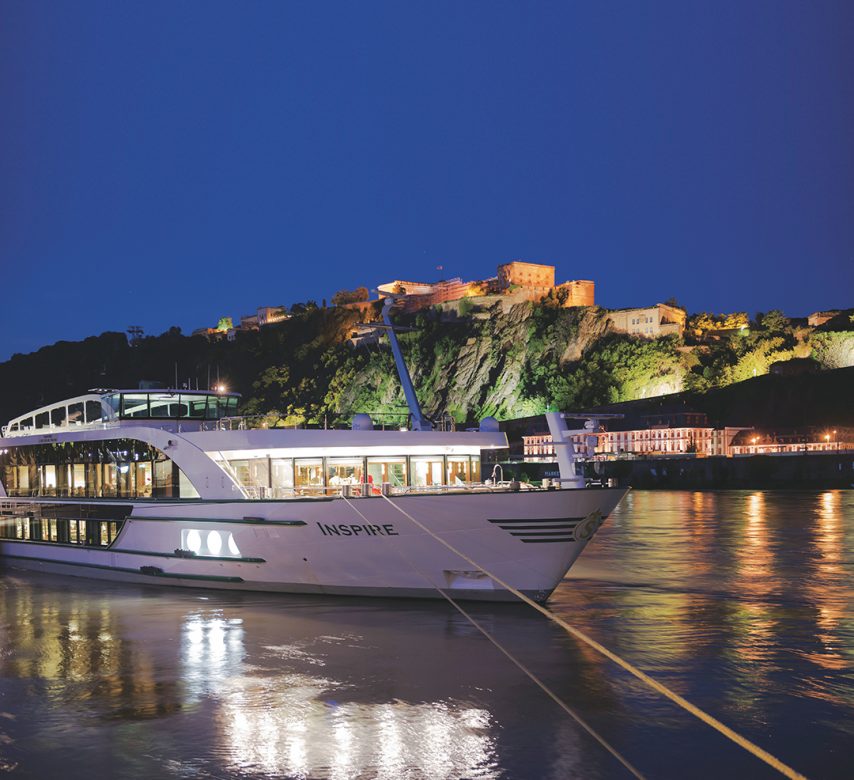 Tauck Inspire, the newest class of ships from Tauck, raises the bar in river cruising.

As ocean cruise ships get bigger and bolder, various lines try to outdo each other with innovations such as giant atriums, poolside movie screens, skating rinks, and bumper cars. River cruise ships have a tougher challenge. Limited in length and height by the size of locks and low-lying bridges, the riverboats of Europe are all pretty much the same.

Tauck is an exception.

In business since 1925, North America’s oldest land-touring company ventured into river cruising in 2006 and has since brought its unmatched quality to the rivers of Europe with its five Jewel-class ships. In 2014, Tauck launched two new Inspiration-class riverboats — ms Inspire and ms Savor — which raised the bar on quality and innovation in the booming and competitive river cruise market.

My wife and I boarded the 440-foot-long Inspire for its maiden voyage through the Netherlands and Belgium. While most riverboats of that size carry between 180 and 190 passengers, the maximum aboard Inspire is just 130 in 67 cabins, giving it the most service staff and the most space per guest of any European line. Other ships typically have 150-square-foot cabins; Tauck averages closer to 200 square feet, with 22 of the suites at 300 square feet. The comfortable beds have pillow-top mattresses with silky, 400 thread-count linens. All the bathrooms are extra large with Molton Brown toiletries and a choice of several 110- and 220-volt electric outlets (which is rare in Europe).
The most innovative of all on the Inspiration-class ships are the eight “Loft Cabins” on the lower deck — traditionally, the space on a typical three-deck ship with cramped cabins and a small window at eye level or higher. Our Loft Cabin was a generous 225 square feet with a separate walk-up area for a table and upholstered chairs facing a massive window area that rose 1 ½ stories to the bottom of the third deck.

Buttons control the curtains and the middle window, which opens wide to provide fresh air and an even better view of the passing countryside. We loved sitting in the chairs enjoying the river swishing by inches below our eye level. The eight lucky couples in those cabins on our cruise raved about them, so chances are that other lines will most likely take note for their future vessels.

With its new ships, Tauck has gone fully all-inclusive with complimentary Internet, an open bar, excellent wine choices at lunch and dinner, and all excursions and gratuities included in the fare. Tauck was the first to provide “anytime dining” in the evening and the first to have an alternate dining room at the rear of the third deck. The main dining room, the Compass Rose, is bright and comfortable with extremely high standards for service and cuisine. Vegetarian meals always available and fresh, local food is acquired by the chefs at various ports.
Onboard entertainment includes enrichment lectures, evening piano music, in-room movies, culinary demos, local entertainment, and themed activities. There’s also a hair salon and fitness center, a putting green and Jacuzzi on the Sun Deck, and bicycles that are available for use on shore.

As a world-class destination company, Tauck includes a signature event on each cruise, usually an elegant dinner at a chateau, castle, or historic building. During our cruise, we had a private tour and marvelous dinner at the Flanders Fields Museum in Ypres, Belgium, site of the devastating Battle of Flanders in World War I. In addition, we enjoyed lunch in the caves of Château Neercanne, a UNESCO World Heritage Site on the Dutch-Belgian border.

Tauck is the only river cruise company to have a full-time cruise director plus three tour directors on each ship, which proved invaluable as they either led small groups of guests on the complimentary excursions or arranged the best local guides with specialized knowledge on others.
In Amsterdam, for example, we toured by canal boat before visiting the famed Rijksmuseum with its stunning Rembrandts and Vermeers. In the afternoon, we strolled the colorful Keukenhof Gardens where 6 million tulips, daffodils, and hyacinths were on brilliant display. In Arnhem, the Dutch town that was the site of the one of the great Allied failures in World War II (dramatized in the film A Bridge Too Far), guests could visit the Airborne Museum or marvel at the Kroller-Muller Museum and its extensive Van Gogh collection.

Because river ships typically dock right in the middle of town, we were able to step off the boat and be guided into three fascinating communities — Nijmegen, the Netherlands’ oldest city; Delft, known for its distinctive blue and white pottery; and the quaint town of Middelburg. In the Dutch village of Veere, we took buses to the Delta Works, a complex engineering marvel designed as a North Sea storm surge barrier after disastrous floods in 1953.

In Belgium, chocolate was on everyone’s souvenir list as we toured the new Red Star Line Museum in Antwerp (much immigration to Ellis Island started here) and got to sample Belgian beer. On our final day, we took a bus into the capital city of Brussels, where Tauck arranged a top hotel for the night before we headed home. Not only did Tauck provide money for lunch but, on the way to Brussels, we were even provided with euro coins for the pay toilets at the rest stop!

Steve Marchant, the Nova Scotian cruise director aboard Inspire, said that Tauck gets an unusually high number of repeat guests and relies on word of mouth rather than traditional advertising. “We’re a destination company,” he told us. “We focus on the most important things — having the best guides and sharing something special with our guests.”

Max and Mel McKee from Ashland, Oregon, were among those repeat guests. Now on their sixth Tauck tour, they’ve become loyal fans. “We come back because of the quality,” Max McKee told us. “Everything is extremely well done. We love the size of the small ships and the experience is entirely different than on an ocean liner. We’ll be back.”