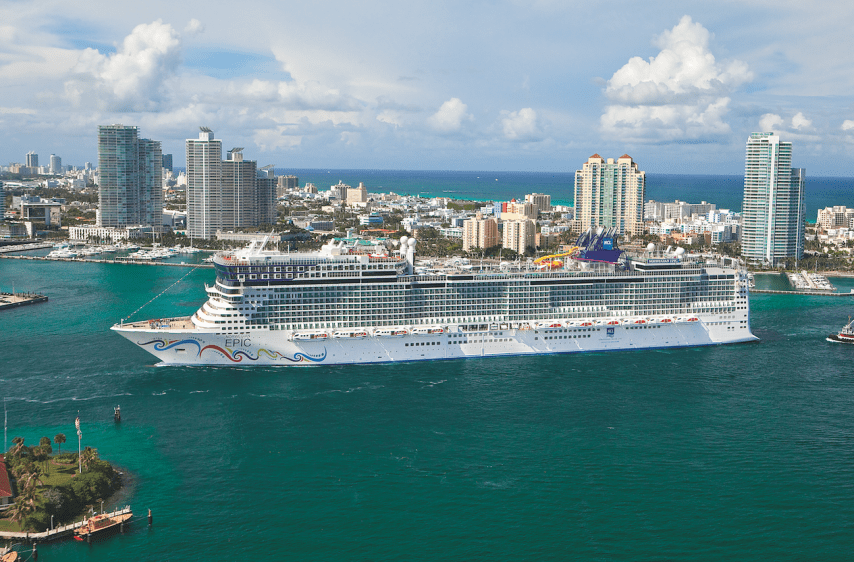 Norwegian Cruise Line’s latest and greatest is in a class all by itself.

Epic, as defined by Webster’s dictionary, means “extending beyond the usual or ordinary, especially in size or scope.”

With a name like this, Norwegian Cruise Line’s newest ship had set the bar high before any details were even announced about its interiors. This new ship had a lot to live up to. And as each new feature was announced, anticipation was growing for years leading up to the July 2010 launch of what would prove to be one of cruising’s most distinctive and ground-breaking ships to date.

Ask anyone who’s been on board, and they’ll tell you that what makes Norwegian Epic, well, epic, are mainly three elements that set it apart from other cruise ship out there: entertainment, dining options, and new stateroom designs.

From big-name entertainment like the Blue Man Group and Legends in Concert to an unprecedented number of dining venues, this ship goes above and beyond when it comes to choices. It’s clear that Norwegian Cruise Line sought a ship that would stand alone, and Norwegian Epic does just that. It goes beyond innovation, and, with all of its individuality, it will no doubt become a legendary ship in the cruising world.

When Norwegian Epic first launched, one of the most talked-about new features of the ship were its accommodations. Making perhaps the biggest impression were the ship’s New Wave Staterooms. With curved walls, contour lighting, and flat-screen interactive TVs, the rooms are contemporary and stylish, but it was the layout that had many early passengers abuzz, mainly because of the bathroom “elements.” The shower and toilet area are each separate, enclosed by frosted glass that doesn’t lend much to privacy. And the sink, essentially in the middle of the room, was blamed for creating too much of a splash.

One cool thing about the staterooms is that, in order to save on electricity, the lights are operated by your keycard, which you have to insert into a designated slot to turn on the lights. Also, when the balcony doors open, the air conditioning goes down. (Incidentally, on Norwegian Epic, every oceanview stateroom is a balcony stateroom.)

Another much-talked-about stateroom category is the hugely popular Studio Staterooms. Specifically designed and priced for the solo traveler, and with exclusive access to a shared private lounge, the 100-square-foot studios are cozy and chic, boast ample space and storage for one, and even come complete with adjustable mood lighting. (Where were these solo studios during all those college spring breaks?)

Other stateroom options to note include Spa Suites, which feature soothing décor, entry to the Mandara Spa, and complimentary access to the spa’s thermal suites; the Villas, which are part of the largest suite complex at sea with private restaurants, private bars, and a private pool; and a host of family accommodations from Family Balcony Staterooms to 2-Bedroom Family Villas.

Studios and suites have been selling out first. Book early if you are interested in these limited-number categories.

With more than 20 dining venues from which to choose, you will never be at a loss when deciding where to eat on board. The Manhattan Room and Taste are the two main dining rooms, but they look more like trendy land-based restaurants than your typical cruise ship dining room.

Fans of Norwegian Cruise Line will find signature favorites such as Teppanyaki, La Cucina, Cagney’s Steakhouse, Le Bistro, and the Garden Café. But there are plenty of new dining venues — and experiences — as well.

For starters, at the innovative Cirque Dreams and Dinner, you’ll be fed and entertained at the same time. Marvel at such amazing acrobatic acts as tightrope walkers, hula-hoop spinning, and unbelievable balancing feats. There’s also the new Argentinean-style Moderno Churrascaria where meats are carved tableside, as well as several new Asian venues such as Wasabi Japanese sushi and sake bar and Shanghai’s Chinese/America fusion and Noodle Bar.

Another popular eatery is the 24-hour O’Sheehan’s Bar & Grill, a friendly Irish pub named after Kevin Sheehan, Norwegian Cruise Line’s CEO. Here you’ll find pints o’ plenty as well as classic comfort food from wings and burgers to fish and chips. (O’Sheehans is also one of two spots that feature NCL’s signature bowling alleys. The other is Bliss Ultra Lounge.)

And by the way, if that’s not enough, you can even order a pizza — 24/7 — which will be delivered to you nearly anywhere on the ship.

The dining venues aboard Norwegian Epic, together, serve more than 20,000 meals a day.

At the Atrium Café, one of the most central hubs of the ship, you can grab a premium cup of Joe and hang out in the comfy chairs relaxing, reading, or chatting with friends. You can’t miss the two-deck-high video screen, on which you can gaze at scenic views from around the world, watch the big game or other televised events, or witness fellow cruisers trying their hand at the latest Nintendo Wii games.

If coffee doesn’t cut it, grab some friends — and the supplied hooded parka and gloves — and make a reservation at the Svedka Ice Bar, the one and only true ice bar at sea. Inspired by original Scandinavian ice hotels, everything in the 17-degree room is made out of ice, from the bar to the benches to life-size sculptures.

The ice bar accommodates 25 people at a time so as not to get too tight, although a little human warmth won’t hurt. The experience will cost you $20, which includes two signature cocktails (there are six specialty drinks to choose from) and 45 minutes to drink up, look around, and snap some pictures to post on Facebook later.

A quiet retreat at the back of the ship on Deck 14, the full-service Mandara Spa offers 50 treatments for men and women that range from hot stone massages and facials to mani/pedis and acupuncture. For something different, try a Bamboo Massage, a Bliss Triple Oxygen Treatment, a Thai Herbal Poultice Massage, or even BOTOX®, teeth whitening, or the signature Epic 24 Karat Gold Facial.

When the sun sets, the choices for evening entertainment are endless, many of which are unique to cruising. Book a seat at the Blue Man Group (at least once), take in a performance of the famous Legends in Concert (currently featuring celebrity tribute performers — Britney Spears, Rod Stewart, and Michael Jackson — although performers rotate every four months), or venture into Spice H2O, an adults-only, two-level beach club, where you can order tapas paired with signature cocktails.

Also popular is Fat Cats, featuring nightly live blues and jazz performances that you can enjoy in this hip urban setting complete with leather sofas and chairs. For a good laugh, head to Headliners comedy club, which features the improv comedy of The Second City as well as Howl at the Moon Dueling Piano Bar Shows.

What? Not enough to keep you busy? Then keep the party going at one of Norwegian Epic’s 20 bars and lounges, from Maltings whiskey bar and Shaker’s martini and champagne bar to the ever-bustling O’Sheehan’s or Bliss Ultra Lounge.

Journey’s “Don’t Stop Believin’” is the most requested song at Howl at the Moon.

Got kids? Then get on this ship. Norwegian Epic features a host of family firsts that will make kids of all ages smile. An exclusive partnership with Nickelodeon brings Nickelodeon at Sea to select NCL ships, including Norwegian Epic. Cruises feature live Nickelodeon-themed interactive shows such as Slime Time Live, poolside entertainment, Nick-themed dance parties, and character breakfasts. All offer the chance for kids to meet their favorite characters such as SpongeBob SquarePants, Dora the Explorer, and Jimmy Neutron.

Take it one step further and book the upcoming Nickelodeon All Access Cruise, a 7-day Mediterranean cruise, which sails roundtrip from Barcelona on July 24. This special one-time opportunity features all of the Nickelodeon-themed activities on other regular sailings, but will also add features such as never-before-seen episodes of hit TV shows like iCarly, Victorious, and SpongeBob SquarePants; character breakfasts everyday of the cruise; the chance for your entire family to get slimed; and even appearances by Jennette McCurdy and Nathan Kress, stars of iCarly.

Also, be sure to check out the line’s first Aqua Park, which includes three water slides and the Epic Plunge, where you can ride an inner tube through a bowl and down a 200-foot-long tube. There are also two main pools complete with water effects as well as a children’s Splash and Play Zone, which features sculptures, water sprayers, and a kiddy slide.

Recess, for kids ages 2 through 12 (separated into age groups), features a space-themed play area, air hockey, an interactive light-up dance floor, Wii games, an arts and crafts area, and a surround-sound cinema. Entourage, for teens ages 13 through 17, is a funky space on the top of the ship that features air hockey, pinball, foosball, a video jukebox, large flat-screen TVs, and PlayStation 3. At night, the area becomes a hip nightclub for dancing or just hanging out on comfy chairs and couches.

The Aqua Park’s slides would run more than 750 feet if they were put together end-to-end. That’s taller than the Washington Monument at 555 feet tall.

The first time I saw Blue Man Group was when the show Tubes debuted off-Broadway in 1991 at the Astor Place Theater in New York City. I was at the whim of my cooler-than-cool older brother (he made me say that) who was playing tour guide, and I had no idea what to expect of these “blue men” he spoke of. In the small basement theater, I watched bright neon paint get pounded on a drum, heard the loud base of techno music, saw cereal get shoved into the mouth of a blue man, and had toilet paper strewn over my head as the show closed.

Almost 20 years later, the once unheard of Blue Man Group now performs in New York (still at Astor), Chicago, Boston, Las Vegas, and other cities around the world — including in Norwegian Epic’s Epic Theater. And I couldn’t wait to see it all over again.

Obviously, two decades brings some higher-tech effects and updated subject matter, but I was psyched to see some of the show’s original acts and enjoyed every minute of this energetic, one-of-a-kind entertainment — right up to the toilet paper covering the audience to close the show.

“The audience is a huge part of our show,” admitted one blue man, who said that they bring people on stage at random. “You won’t know what will happen.”

Onboard shopping: The Marketplace features clothing, jewelry, makeup and perfume, and other retail options.

Communications: 24-hour Internet Café as well as Wi-Fi throughout the ship

Itineraries: 7-day Eastern and Western Caribbean from Miami now through May 2011, 7-day Western Mediterranean from Barcelona beginning in May.