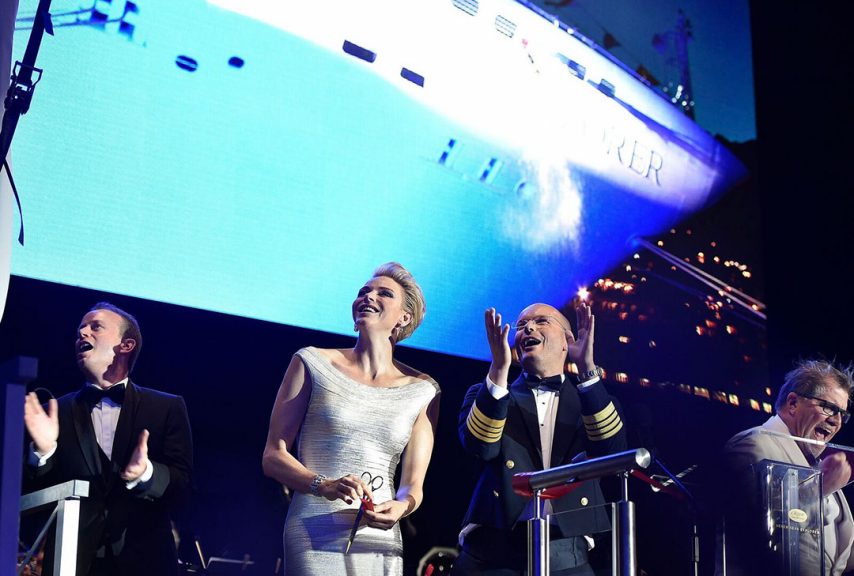 “Tonight we celebrate the realization of our vision,” said Frank Del Rio, Norwegian Cruise Line Holdings president and chief executive officer, adding that the company has already begun a massive $125 million refurbishment effort to ensure that every ship in the fleet matches the luxury standard found on Seven Seas Explorer and her sister ship, which is scheduled to debut in 2020.

Born in Zimbabwe, H.S.H Princess Charlene grew up in South Africa. A competitive swimmer, she represented South Africa during various world-class competitions including the 2000 Olympic Games in Sydney, Australia. She married Albert II, the Sovereign Prince of Monaco, in July 2011. In 2012, she launched The Princess Charlene of Monaco Foundation, whose mission is to teach children and adults basic water safety techniques and save lives. She is also a Global Ambassador of Special Olympics.

“It is an honor to be the godmother of this magnificent ship, Seven Seas Explorer,” said Her Serene Highness Princess Charlene. “I am also thrilled by the discussions taking place between my Foundation and Norwegian Cruise Line Holdings to implement my Water Safety program on all their ships. Developing awareness of the risks attached to aquatic environments is, for me, a cause of most importance.”

The 750-guest, all-suite, all-balcony Seven Seas Explorer features an unparalleled collection of opulent and spacious suites, extravagantly designed theaters and lounges, a state-of-the-art spa, and five lavish gourmet restaurants. Following her maiden voyage on July 20, 2016, she will spend an inaugural season in Europe before heading to Miami for a series of Caribbean voyages.