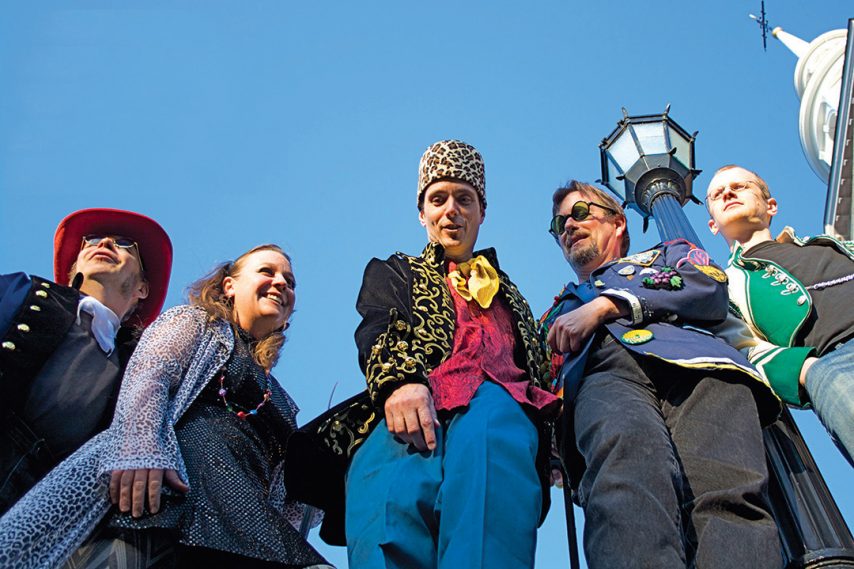 Peace out with Mellow Yellow’s psychedelic onboard shows.

Even though I was a first-timer on a theme cruise, I had a pretty good idea what to expect from a band called Mellow Yellow. I figured there’d be plenty of fans of the trippy 1960s music they play, and so my sister, Susy, who was traveling with me, picked up a couple of flowery headbands and psychedelic-style bracelets that we could wear to the concerts and theme night parties. Upon boarding MSC Cruises’ MSC Divina we headed to our cabin, settled in, and quickly glanced at the schedule for our upcoming sailing adventure.

We would first encounter Mellow Yellow, a ’60s and ’70s tribute band, on Friday night, the third night of the cruise, at their trippy show that took over the Pantheon Theatre. According to the band’s website, “While other tribute bands just play the music, Mellow Yellow goes the extra mile to capture all the hey-man-peace-and-love-grooviness of the songs that helped define a decade.” So we donned our flower child headbands and bracelets and settled in to get a good view of the group.

It was obvious from just the first few songs that the quintet is a tight band comfortable around each other. Singer Linda Bassick (whose stage name is “Dusty Love”) was rocking her ’60s-inspired outfit as well as several instruments. She showed her range on vocals moving smoothly from Jefferson Airplane’s psychedelic “White Rabbit” to the kitschy “These Boots Are Made for Walkin’” by Nancy Sinatra. Her flute-playing skills are first rate as well.

Running through hits from The Beatles, The Moody Blues, and, of course, the signature Donovan hit “Mellow Yellow” were David Cooper (or Brad DaddyO) who performed his share of vocals and played the Mellowyellowtron; Ken French (or Kenny Diggit) on guitars, keyboards, and vocals who was the highlight on Doors songs; bassist Brad Sourdiffe (or Apollonius “Flip” Funk); and Sean Preece (stage name Saratoga Sunshine) on drums.

Following the concert, we headed to the disco for the ’70s theme party where the DJ played Gloria Gaynor’s disco anthem “I Will Survive” but also delved into….