Cruise Artiste – Maritime painter Stephen Card has got the ticket to the good life. 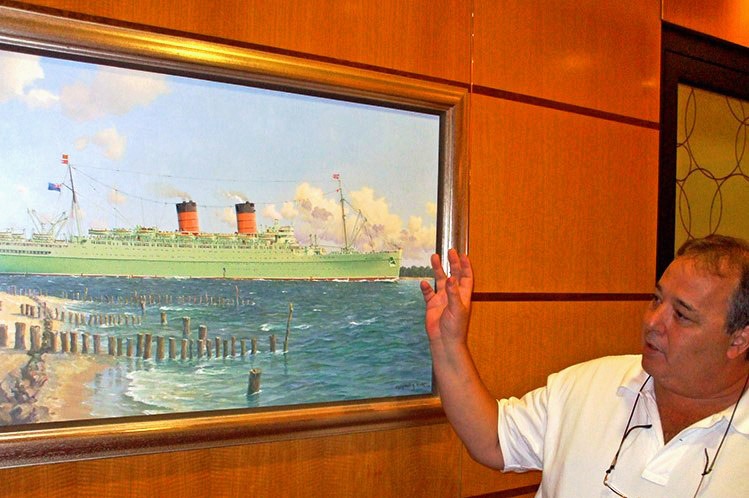 Maritime painter Stephen Card has got the ticket to the good life.

When I die, I want to come back as maritime artist Stephen J. Card, luckiest son of a gun ever.

Stephen was born and raised in Bermuda — that’s the first thing I’m jealous of. Just imagine calling a place as beautiful as Bermuda home, growing up surrounded by sapphire-blue water, fragrant frangipani and pink sand, being able to wear shorts to even the most formal event and having authentic Bermuda rum swizzles as close as the nearest pub.

Stephen is also a talented artist. Crazy talented, and with no formal training at all. In fact, the guy was a navigator, a ship’s captain and a harbor master and then, one day in 1984, he just whips out a canvas, brushes and some paint and creates an incredibly realistic depiction of Holland America’s Noordam that blows the line’s owner and chairman away. Next thing you know, Stephen is flooded with commissions from Holland America, Cunard, Costa, Celebrity, Disney, Saga and more as well as private and corporate clients. And just like that — bam! — he becomes one of the world’s leading maritime artists.

The cool thing about Stephen though is that he talks the talk and walks the walk. He may be sort of a rock star in the cruise world because of his paintings but even if he packed away his brushes, there’s no question he’d still be booking cruises far and wide well into the future. Which is another thing I’m jealous of. You know how you and I might do a couple of 7-day, maybe 10-day, sailings a year if we’re lucky? Talk to Stephen and chances are he’ll be getting ready for a 22-day cruise next month or planning a 40-day cruise in November. Hell, he’s even done the world cruise. A few times.

“Does Stephen paint anything but ships?” That’s a question that I asked Stephen’s travel companion aboard Holland America’s Statendam the first time I met him in 1993. “Hell, no!” came the response. “He doesn’t even $@%! talk about anything but ships!” Okay, so maybe Stephen has to work on identifying more suitable travel companions but when you’ve amassed a shipload of maritime knowledge and experiences as Stephen has, it’s not surprising that cruise ships and ocean liners do tend to pop up in the majority of your conversations.

But before you go thinking that Stephen is a dull, humorless, fact-sprouting ship buff, hang out at a shipboard bar with him for a while. Wait a second … if you’re a frequent cruiser, you probably already have!