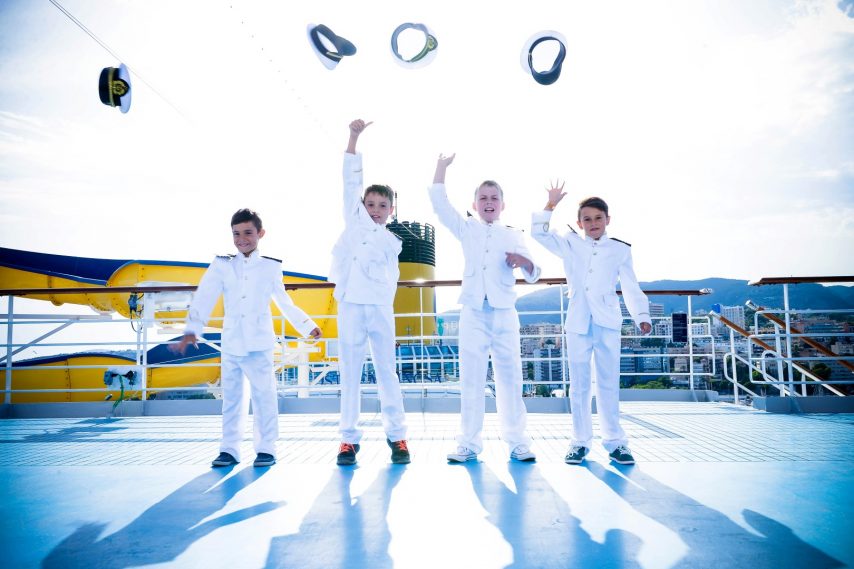 Costa Cruises has created a new “Captain for a Day” experience that gives its youngest guests the chance to see what life is like at the helm. The daylong adventure, which is offered aboard Costa Diadema and Costa Fascinosa, begins with donning their captain’s stripes and ends with dinner with the master of the ship at his personal table in the main dining room.

Participants will receive a captain’s uniform to wear to their captain’s training, where they’ll learn about the ship, nautical terms, navigation, and signal flags. They’ll also see how weather affects the sea and will have a chance to broadcast the day’s weather forecast on the ship’s in-cabin television network.

“Kids get excited when they see the captain and officers walking around our ships,” said Scott Knutson, vice president, sales and marketing, for Costa Cruises North America. “With the Captain for a Day program, they’ll get an exclusive behind-the-scenes look into the role the master fulfills on board, learn a few tricks of the trade, and enjoy an experience unlike anything else they’ve ever done at sea.”

The Captain for a Day program can be booked on board and offers three levels:

The Aspirante Comandante (Captain Trainee) package includes a uniform to wear for the day, the full captain’s training, and dinner at the captain’s table in the main dining room. After dinner, the junior captains graduate and receive a diploma with two 8-by-11 photos.
49.99 euros and 29.99 euros for each additional child from the same family

The Comandante (Captain) package includes all of the perks of Aspirante Comandante, as well as a captain’s hat autographed by the ship’s master for the trainee to keep. Comandantes additionally receive two 11-by-17 photos.
79.99 euros for the first participant and 49.99 euros for each additional child from the same family

With the Comandante Superiore (Senior Captain) package, trainees get to keep their uniform, including an autographed captain’s hat, in addition to all of the Aspirante Comandante and Comandante perks.
124.99 euros and 59.99 euros for each additional child from the same family

The Captain for a Day program complements Costa’s Princess for a Day program, which launched in November 2014 and treats junior cruisers to having their hair, nails, and make-up done; wearing a princess costume with a dress, crown, and wand; attending a Princess Tea Party, and participating in a Princess Parade around the ship.