Five Fave Blasts from the Past! The swinging ’60s and ’70s were a great time for a cruise! 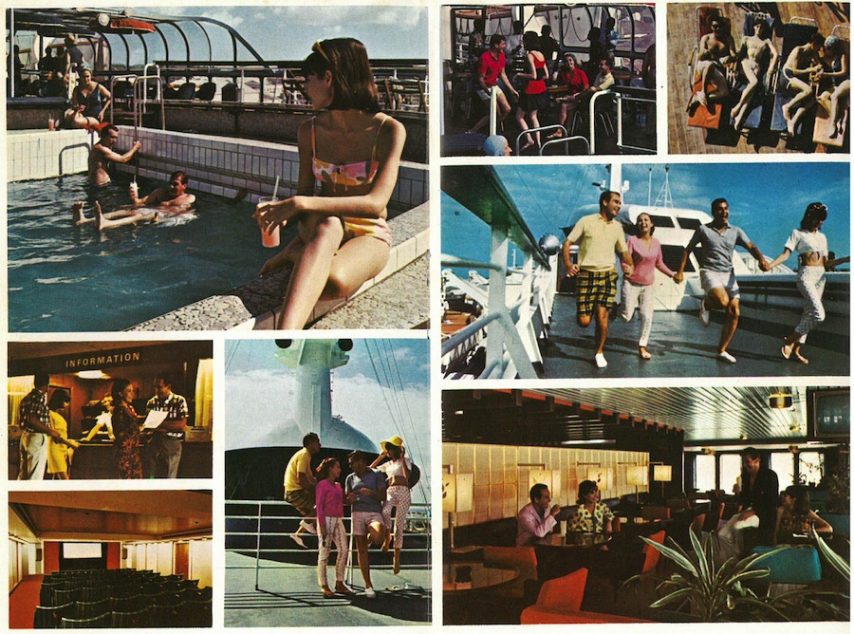 Blasts from the Past

Cruising goes back a long time — just ask noted cruise writers such as William Makepeace Thackeray and Mark Twain. At Porthole Cruise Magazine, our archives don’t go back quite that far, but we do have access to some treasures from the past that are bound to trigger fits of nostalgia in cruisers of a certain age, and fits of giggles in just about anyone else.

Here, pulled from our fun files, are five of our favorite cruise brochures from the 1960s and ’70s.

Before “Fun Ship 2.0” … before there was even a Carnival Cruise Line … “the Fun Ship” sailed twice weekly from Miami to Nassau and Freeport — with a swimming pool! In 1966, this was a splendid vacation, 100 percent air conditioned, with a dinner menu that included treats like Kernel Corn Mexican, Jellied Consomme, and Postum.

Queen Elizabeth, after a three-decade career steaming 3,472,672 miles, served as a kind of floating museum in Fort Lauderdale. Guests could come aboard and marvel at the 700 electric clocks, 680 telephones, 30,000 lamps, and the epic history of what was, in 1968, the “largest ocean liner the world has ever seen.”

For $95, you could book a 3-day cruise to Nassau aboard “the new, beautiful cruise liner commissioned June, 1966.” There was no guarantee that Victor Borge, “Honorary Commodore of the Fleet,” would be personally present on your cruise, but he cuts a dashing figure on the pamphlet, inviting you aboard what was “the most modern and civilized way to cruise the Caribbean.”

She might have an operatic name, but everything else sings “Disco!” In 1972, this was the way to cruise to Puerto Plata, St. Thomas, San Juan, and Cap Haitien — as well as the “fifth island,” Miami’s resort village of Bal Harbour. In 1986, the ship left Commodore Cruise Line and wound up sailing for the Church of Scientology as Freewinds.

“Sitmar” was short for “Societa Italiana Trasporti Marittimi,” taking passengers all over the world from the 1930s up to 1988, when P&O Cruises took over the fleet. But back in 1979, once you’d booked passage, this helpful guide showed which officer wore which insignia, where the “Soda-A-Go-Go” was located, what to do if you needed a “steamer chair” (we call them deck chairs now), or what treatment you might expect if you were feeling a little woozy despite the ship’s stabilizers.