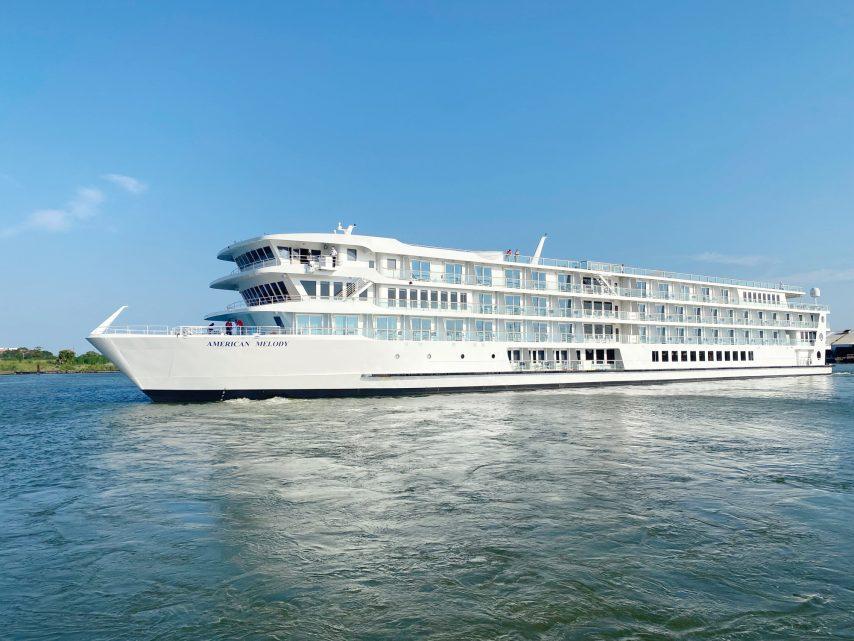 When American Cruise Lines became the first to resume operation in the U.S.A this past March 13th, it marked an important milestone for not just the cruise line, but the industry itself. Now, a few months later, more ships are starting up all over the country and many bear the American Cruise Lines name.

Porthole Cruise and Travel Magazine founder and Editor-in-Chief Bill Panoff spoke with American Cruise Lines President and CEO Charles B. Robertson about their resumption of service, the brand new ship in their fleet and why an American river cruise is a preferable vacation option right now.

The biggest news surrounding American Cruise Lines these days is the new additions to their fleet with more on the way. Despite the pandemic slowing things down, American Melody was delivered on time and has already embarked on her inaugural cruise just this month. Robertson was asked if the line’s upcoming ships, American Symphony and American Serenade were also on schedule for delivery.

“Absolutely yeah. We’re really excited for those two boats and really excited to have them just as fast as we can. I was in the shipyard about two weeks ago standing on the bow section of American Symphony so it’s real. Since we design them ourselves, we build them ourselves, so it really helps us keep a tight grip on the production schedule,” Robertson said. “We were also really proud during the pandemic to keep the shipyard open and that meant a lot to the people in the yard to have that continuity.”

When asked about the inaugural cruise of American Melody, Roberts expressed his excitement and let us know what sets this ship apart from the rest.

“It’s certainly the highlight of my August. I’m so thrilled to see that launching, this weekend actually, and to really see it in operation and guest’s faces when they get on board for the first time,” Robertson said. “That ship has a completely new interior package. It looks a lot like our other modern riverboats from the outside but we worked with Studio Dado in Miami to evolve the onboard atmosphere and it’s been unbelievably well-received by the people who have gotten a sneak peek of it so far.”

Cruising Alaska is Back

Earlier this summer, American Constellation became the first American Cruise Lines ship to call on Haines, Alaska in more than 600 days. Robertson was asked about the welcome back celebration they received from the town.

“It was absolutely fantastic, it was so much fun to watch. And it wasn’t just Haines. We were the first ship to call on a number of ports in Alaska and other places around the country, but Haines made a really big deal out of it and it was perfect. The local leaders came down and even community members came down just to clap as our guests were getting off the ship. The first guests to step ashore were even in the local newspaper.” Robertson said.

Thanks to small ships, close to home itineraries and brand new ships, American Cruise Lines is poised to come out of the pandemic stronger than ever. Of the 13 ships currently in service, the largest holds just 190 guests, which is something cruisers are looking for right now. They also have more than 35 itineraries in over 31 states so there’s plenty to choose from no matter where you live.

No Vaccine Mandate on Board

Other than some select cruises in Alaska, American Cruise Lines doesn’t currently have a fleet-wide vaccine mandate on board their ships. Robertson was asked what the embarkation process was like for unvaccinated guests.

“We very, very strongly encourage the vaccine. Let’s be clear about that first. We’ve been running between 95 and 100% vaccinated by default but in those cases where a guest is unvaccinated, they have to take a PCR test before they travel and send us the negative results and they’re included with all the other guests who have to take at the gangway before they board the ship. So they’re still double testing if they’re unvaccinated,” said Robertson.