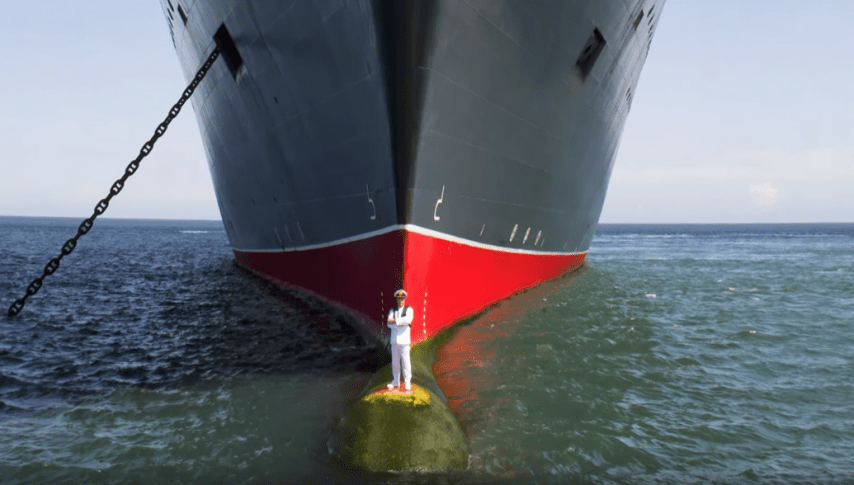 For Captain Kevin Oprey, sailing is life. From his boyhood in Southampton to his first job at 17 with the Pacific Steam Navigation Company, Captain Oprey has never been far from the sea. His current position is perhaps the most prestigious a Captain can have, navigating Cunard Line’s flagship ocean liner, RMS Queen Mary 2. 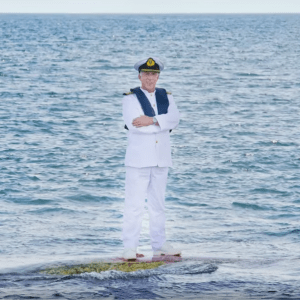 In honor of her 10th year at sea back in 2014, the team at Cunard took the opportunity to photograph Captain Oprey and the RMS Queen Mary 2 in a way never before seen; with the captain standing atop the bulbous bow at the front of the ship.

Usually lying just beneath the surface of the water, the bulbous bow redirects the flow of water for reduced drag, meaning higher speeds, better fuel efficiency and improved stability. The opportunity to photograph Captain Oprey standing atop it was something that’s never been done before on any cruise line.

“When I was left alone on the bulb, everything was very quiet,” Captain Oprey mused. “I was almost an eerie silence.”

British cruise ship line Cunard, known for such majestic ships as RMS Queen Elizabeth 2, launched the extravagant RMS Queen Mary 2 in 2003. Captain Oprey has been at the helm for nearly a decade and has as unique a perspective on this magnificent ship as any.

“It’s very difficult to describe the relationship you have with a ship,” he said. “ She is unique. She is an iconic ocean liner. The only one of it’s kind in service. I’m very proud of the picture and in years to come I’ll look back on it with great pride, but the important thing is that it’s this ship that counts. This ship is far more important than any captain that has ever sailed on her or will sail on her in the future.”