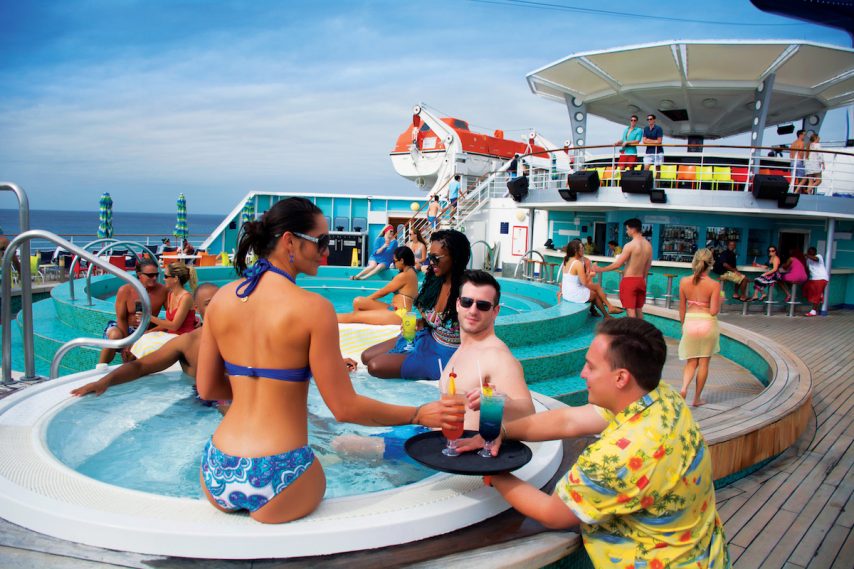 The largest passenger ship to ever homeport in West Palm Beach, Bahamas Paradise Cruises’ Grand Classica joined the smaller Grand Celebration this past March in providing a convenient daily cruise service to Freeport, Bahamas. The 52,926-grt, 1,680-guest vessel is impressive enough for her basic features: two pool and lido areas (one for families and one for adults); vast, open sun decks; a large gym and spa; a double-deck showroom; a variety of meeting rooms and shops; a sprawling casino; numerous bars; a teen center and a children’s playroom; a huge dining room; a recently remodeled buffet; a combination gelateria and pizzeria; a coffee and espresso bar; the Admiral’s Steakhouse and the Rock Grill specialty dining venues; a soaring atrium; four overall categories of accommodations; and, thanks to her Italian origins, even a chapel!

Perhaps more important than the ship’s myriad features, of course, is that everything runs and functions well, the entertainment dazzles and the food is tasty. Even on her maiden cruise, fresh from the shipyard and still sporting the yellow-funneled livery of former owners, Costa Cruises, the Classica delivered on these key points. Of course, all shakedown cruises come with hiccups, and this one was not without the occasional glitch — crew members were still learning the ropes, the new Junior Suites (comprised of two combined outside staterooms) were not quite finished and the adults-only pool area was still being refurbished. But all things considered, Grand Classica made an excellent first impression, especially considering that fares begin at a mind-boggling $119 per person for a 2-night cruise. How can anyone afford not to take a cruise at those rates?

The big question is whether her party-oriented, largely first-time cruisers will get the finer design aspects of Grand Classica, especially since she’s not the newest ship afloat and she lacks trendy bells and whistles like waterslides and rock-climbing walls. Instead, the Classica is brimming with unique architectural and decorative elements that still resonate a quarter-century after she was first commissioned.

When she was built for then family-owned Costa Cruises in 1991 as Costa Classica, she stood out from the other cruise ships of the era by sacrificing a bit of function for the sake of form and beauty. Like an Italian sports car, her lines were sleek and meant to impress. Designed by renowned architects Pieluigi Cerri and Ivana Pofiri of the Gregotti Associati of Milan — and as the first entirely new Italian passenger ship since 1966’s SS Eugenio C — she was intended to combine elements of cruising’s past with a futuristic flourish. In a nod to the traditional liners of yore, the ship’s four lower decks were dedicated to cabins and instead of squared-off windows, her outside staterooms boasted large circular windows that emulated portholes. The public rooms were concentrated at the top of the ship, beginning on what is now called the Abacos Deck, which sports floor-to-ceiling windows not unlike the enclosed promenade decks of the great liners.

As for her racy profile, Classica’s sharply raked bow and starkly angular superstructure is topped with a 360-degree, glass-framed circle of an observation lounge and a unique cluster of funnels that are an abstract tribute to legendary three-stacked liners like the first Queen Mary and the Normandie.

The most prominent byproduct of then family-owned Costa’s desire to create an object of beauty, the observation lounge (originally Galileo’s but now called The Crow’s Nest) could have been much larger and even provided better views if it was “squared off”. But then, Classica would have been more like an “ordinary” cruise ship.

Perhaps because her high Milanese style was the antithesis of the glitzy mass market American cruise ship of her era, Costa Classica and her near twin, the 1992-built Costa Romantica were mainly based in Europe throughout their long careers. Ironically, after Costa Cruises was purchased by Carnival Corporation in 2000, their newer ships actually were tweaked versions of Carnival blueprints. These much larger, infinitely flashier vessels eventually displaced the Costa Classica and Costa Romantica, which were transferred to Costa’s Neo subdivision of smaller, statelier ships. In 2014, Classica was renamed Costa neoClassica, while her sister, already renamed Costa neoRomantica, had balconies tacked onto her once-sleek hull and a pair of veranda-lined accommodation decks replacing her iconic, if not quite spatially efficient, observation lounge.

In addition to her dynamic and thus-far-untampered-with exterior architecture, what sets Grand Classica apart from the competition is the quality of her remaining original fittings and artwork. Many of her decks are still lined in expensive (and now endangered) Burmese teak and to this day, there are large swaths of the original Istrian stone surrounding the family pool area, albeit with patches of latter-day tile work.

In the heart of the ship, the atrium soars four decks from the floor of the reception area on Bimini Deck to the angular recessed ceiling of Paradise Deck. It would be stunning enough just for its clean lines and stark simplicity, but a cantilevered V-shaped staircase connecting the uppermost Abacos and Paradise Decks gives the atrium an extra vertiginous “wow” factor. This is also the space where embarking guests will encounter the striking turquoise glass sculpture by Luciano Vistosi entitled “Fred and Ginger” that takes its inspiration from the building on Prague’s Vlatva River. Designed for the 2000-built Costa Atlantica, the sculpture was eventually transferred to Costa Classica and while not original to this ship, it remains a remarkable example of Italian art.

The Grand Classica’s double-deck showroom, now called the Legends Grand Theater, is a virtual gallery unto itself. In addition to….