5 Faves: Independence Days. Free for All! 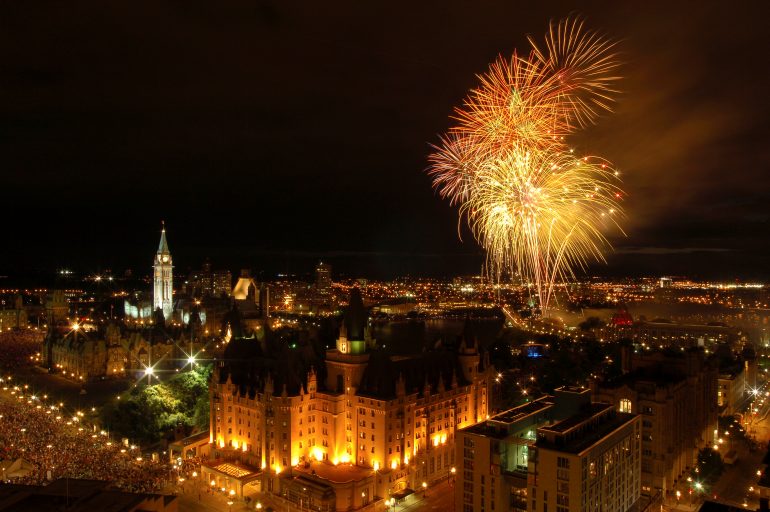 Five Ways to Celebrate Independence Days Around the World

It’s the United States’ Independence Day on July 4, and that means blue, red, and white everything combined with the smell of gunpowder from fireworks waiting to erupt. That is, if you’re American.

While we here in the U S of A take pride in our patriotic traditions, the meaning of Independence Day and how it’s celebrated looks vastly different in other parts of the world. Here are our top five favorite independence days and how to celebrate them across all corners of the globe!

Just before our own independence day is Canada Day for our northern neighbors. It celebrates the anniversary of the July 1, 1867, enactment of the Constitution Act, 1867, which united the three separate colonies of Canada, Nova Scotia, and New Brunswick into a single Dominion within the British Empire called Canada. Although it wasn’t until 1982 that the Canadian Constitution was patriated from its motherland, Great Britain, an abundance of celebrations kicked off the young country’s 150th birthday.

How to Celebrate: Canada’s capital city of Ottawa showed off the richness of Canada’s diversity with live music and cultural demonstrations at Parliament Hill (the Canadian equivalent to the White House). The daylong celebrations built to a spectacular climax with a 20-minute “pyromusical” fireworks show at 11 p.m. that promised to be the largest-ever presented in the National Capital Region for Canada Day.

French National Day — called La Fête Nationale in French — is France’s independence day. It commemorates the storming of the Bastille, a prison in Paris seen as a symbol of absolutist monarchy by Louis XVI. The event marked the beginning of the French Revolution. Celebrations are held throughout France, including the oldest and largest regular military parade in Europe, which is held the morning of July 14 on Paris’ Champs-Élysées in front of the President of the Republic, other French officials, and foreign guests.

How to Celebrate: Party like a Parisienne at the Bal du 14 juillet, a giant dance party traditionally held on the Place de la Bastille (where the stormed prison once stood) on the evening before Bastille Day (July 13). A different theme is chosen each year, usually providing an opportunity to don elaborate costumes and hear live music.

Every August 15 since 1947, India’s growing population of 1.3 billion celebrates the end of a three-century–long British Rule by adorning their houses, schools, and offices with the colors of the Indian flag. In the morning, citizens attend ceremonies where they sing the national anthem and in the evening, families gather to watch the national flag being hoisted atop the Red Fort in New Delhi.

How to Celebrate: Bring your kite and a picnic basket to watch and join in as thousands of brightly colored kites — which represent the freedom of the young country and the diversity of its culture and dialects — fill the sky from Kashmir to Kochi.

The Proclamation of Indonesian Independence was read at 10 a.m. on Friday, August 17, 1945. The declaration marked the start of Indonesia’s diplomatic and armed resistance against the forces of the Netherlands and pro-Dutch civilians, and it was officially acknowledged as Indonesia’s independence day in 1949. In the morning, selected high-school students throughout the country hoist a solemn flag at the Merdeka Palace in Jakarta. The rest of the day is marked with street fests, fun games, and concerts.

How to Celebrate: Join the local festivities with some friendly competition. Common games include sack races and a krupuk or cracker-eating contest, where participants race to eat a giant cracker hanging from a string with their hands tied behind their back. One of the toughest challenges is the palm tree–climbing contest called panjat pinang where the male-only participants attempt to scale up a slippery palm tree the fastest. As amusing as it may look, panjat pinang symbolizes the struggles of the Indonesians to achieve their independence from the Dutch who only began to officially recognized Indonesia as an independent country in 2005!

Before you put away that oversized sombrero from your office Cinco de Mayo party, don it once more on September 16: Mexico’s actual independence day. Mexicans celebrate independence day in September to immortalize the “Grito de Dolores” (Cry of Dolores) started by a small town Roman Catholic priest in Dolores that extended to the Army of the Three Guarantees who consolidated Mexico’s independence from Spain. The holiday is marked with parades and concerts throughout the country.

How to Celebrate: Be at the heart of the festivities in Mexico City’s main city square, Zocalo. Brass bands fill the streets and governors re-enact “El Grito,” the famous cry for freedom, which is met with cries of “Viva!” by the citizens in patriotic harmony. At night, people set towers of braided willow and palm stalks on fire with exploding fireworks, firecrackers, and sparklers loaded inside.