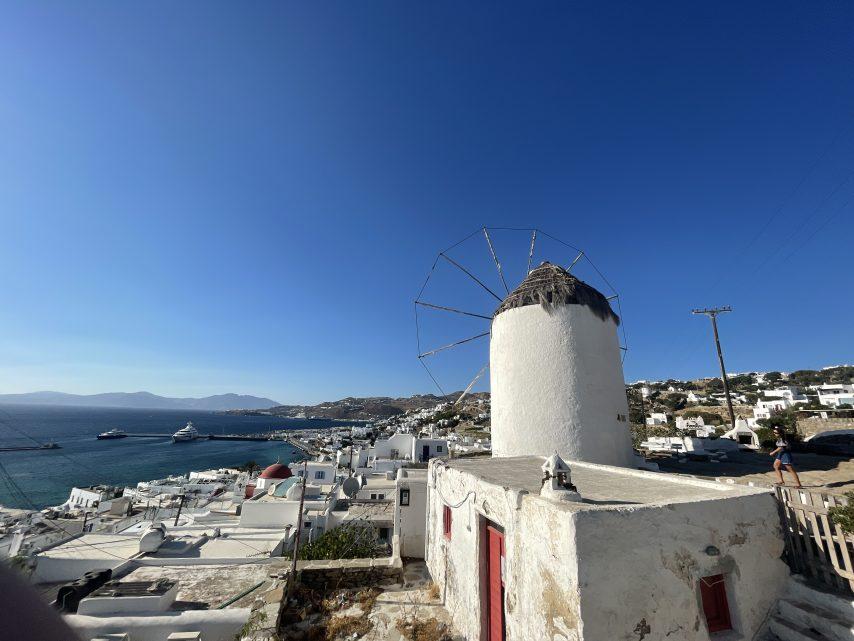 When you’re named after the heir of a god, you better meet expectations.

Mykonos, one of Greece’s most famous islands, is named for a descendant of the god Apollo (allegedly) and the first ruler of the island. And yes, it certainly does meet expectations.

It exceeds them, in fact. 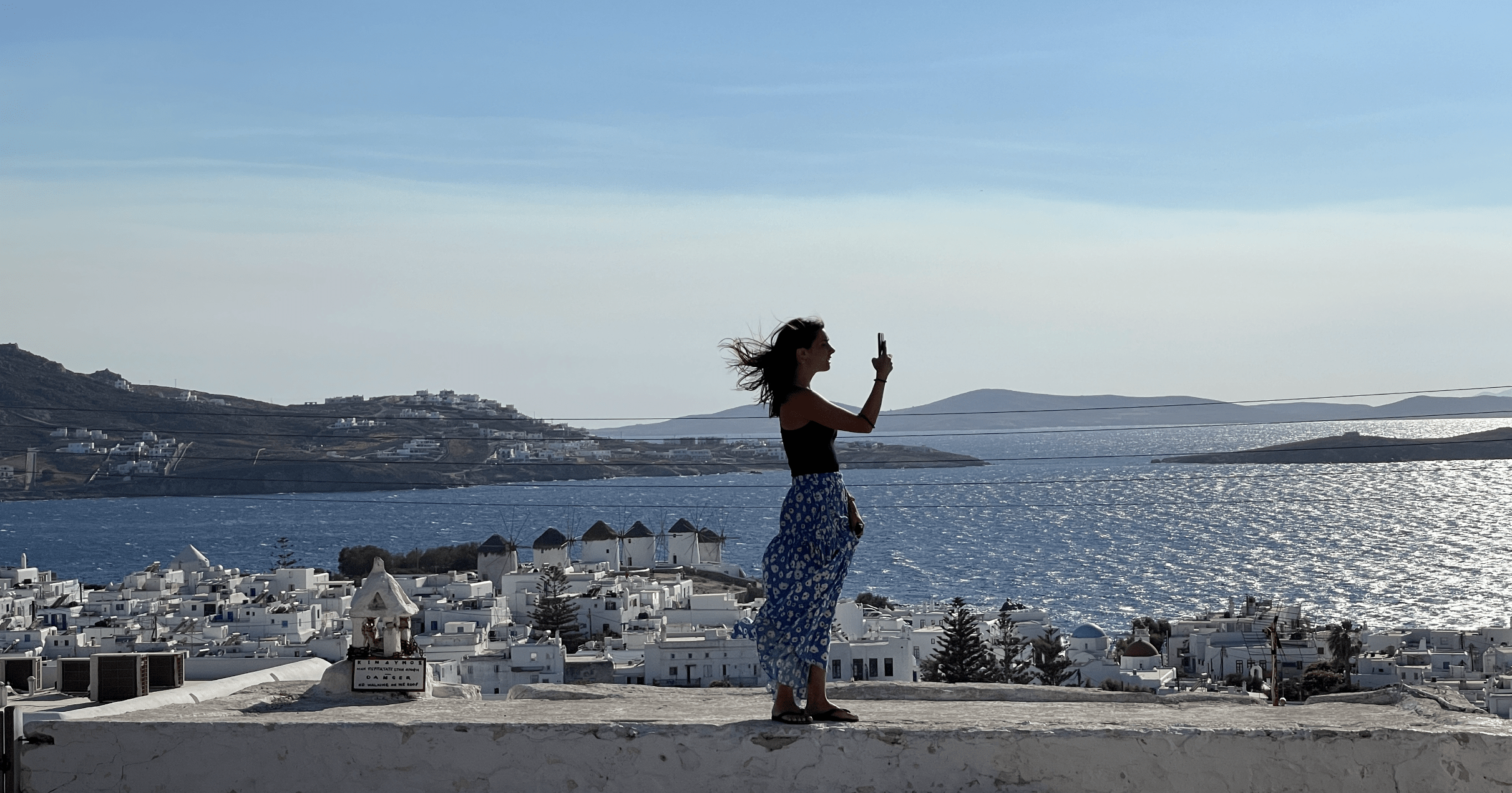 An extra from the set of Mama Mia, probably | Photo: Evan Gove

Unless you’re the most unplugged person on planet Earth, you’ve heard of Mykonos. Its place on the pantheon of bucket-list travel destinations is undeniable. You’ve seen the iconic whitewashed homes and labyrinth of narrow, winding streets draped in brilliant rouge bougainvillea on the cover of just about every travel magazine and screen-saver slideshow since the computer first arrived in all of our homes.

Prior to stepping off Atlas Ocean Voyages’ World Navigator at the dock where the ferries from Athens and Santorini arrive at breakneck speed, that’s all Mykonos was to me – a pretty picture and lukewarm promises of “someday”. Never did I think I’d be there sitting at a table ocean-side, noshing on my hundredth Greek Salad of the week and grinning ear-to-ear watching the parade of gorgeous people pass by. 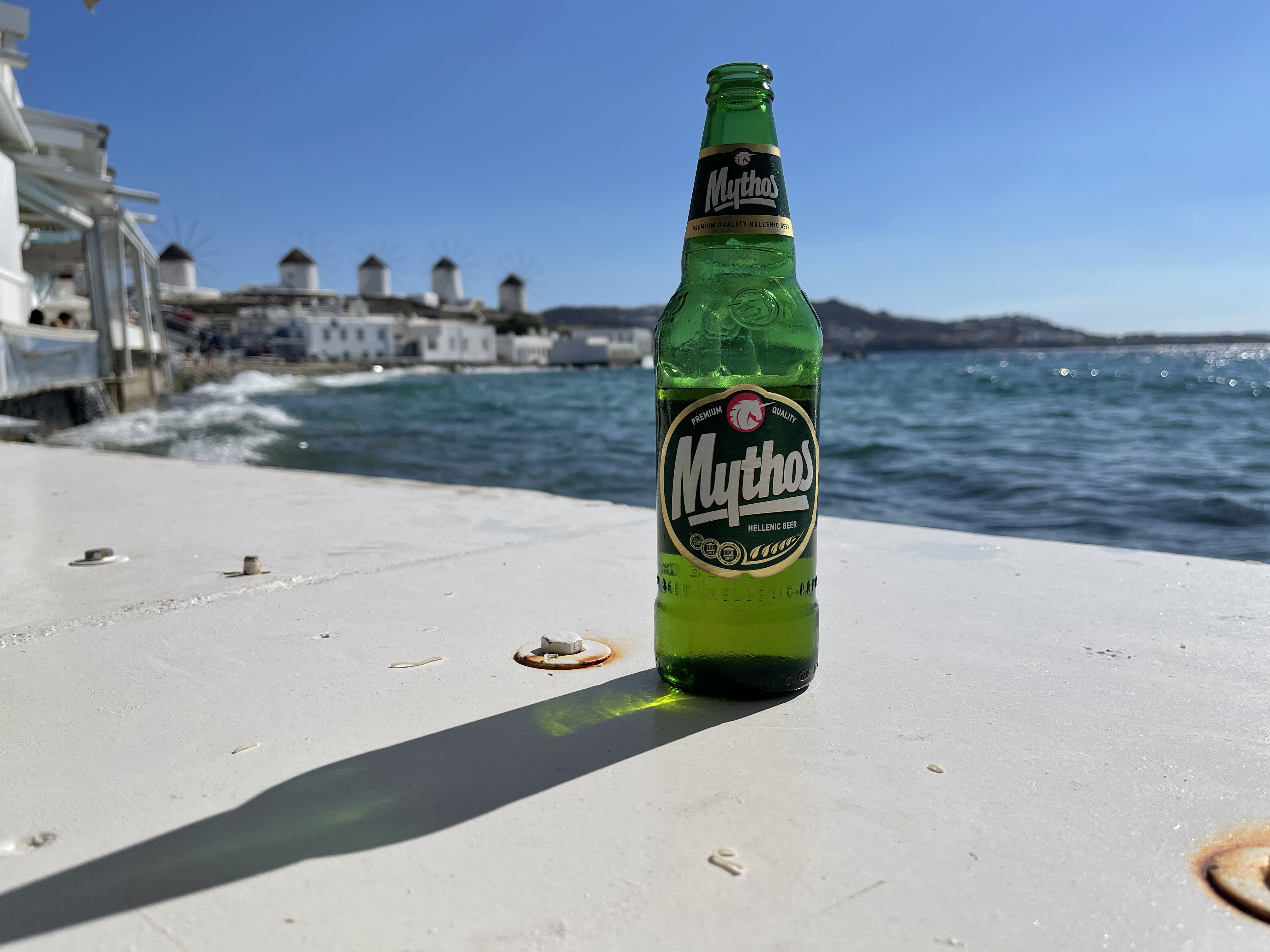 Sipping a Mythos by the water | Photo: Evan Gove

After spending the day strolling the paths of Chora, the main settlement which translates to “town” in Greek, the island morphed from a pipe dream to one of the most satisfying travel experiences I’ve ever had. I could pontificate endlessly about the charm of artisanal blue doors or the tantalizing smell of souvlaki wafting through the corridors. 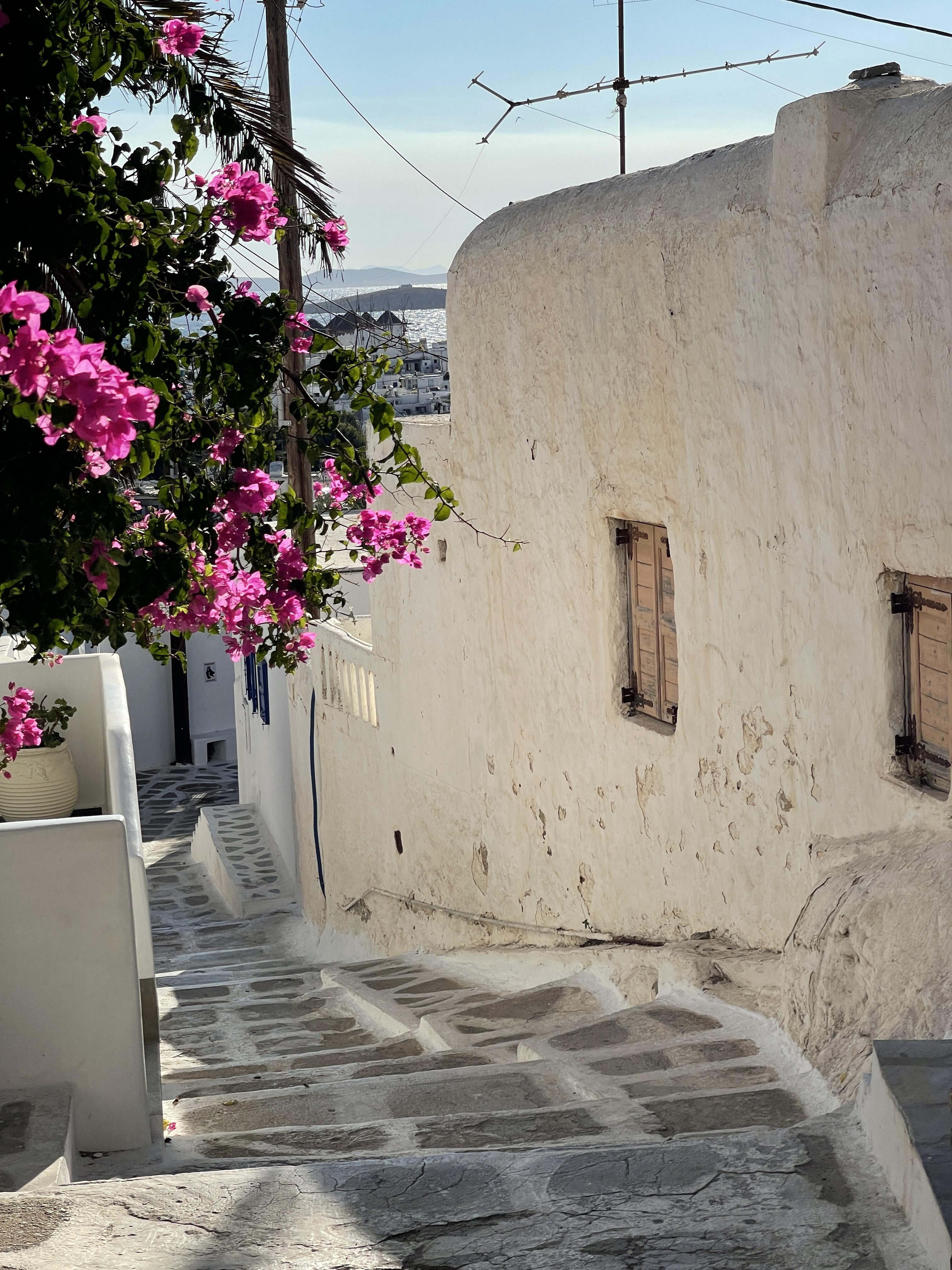 Mykonos is a blustery island, about 300 days of the year feature a healthy North wind which sends the flags flapping and makes overheated tourists throw out their arms in sweet relief. The Venetians, a sect of people from present-day Italy (Venice, specifically, for those incapable of deduction), happened to notice the breeze and were responsible for the manufacturing feat in the 16th century. 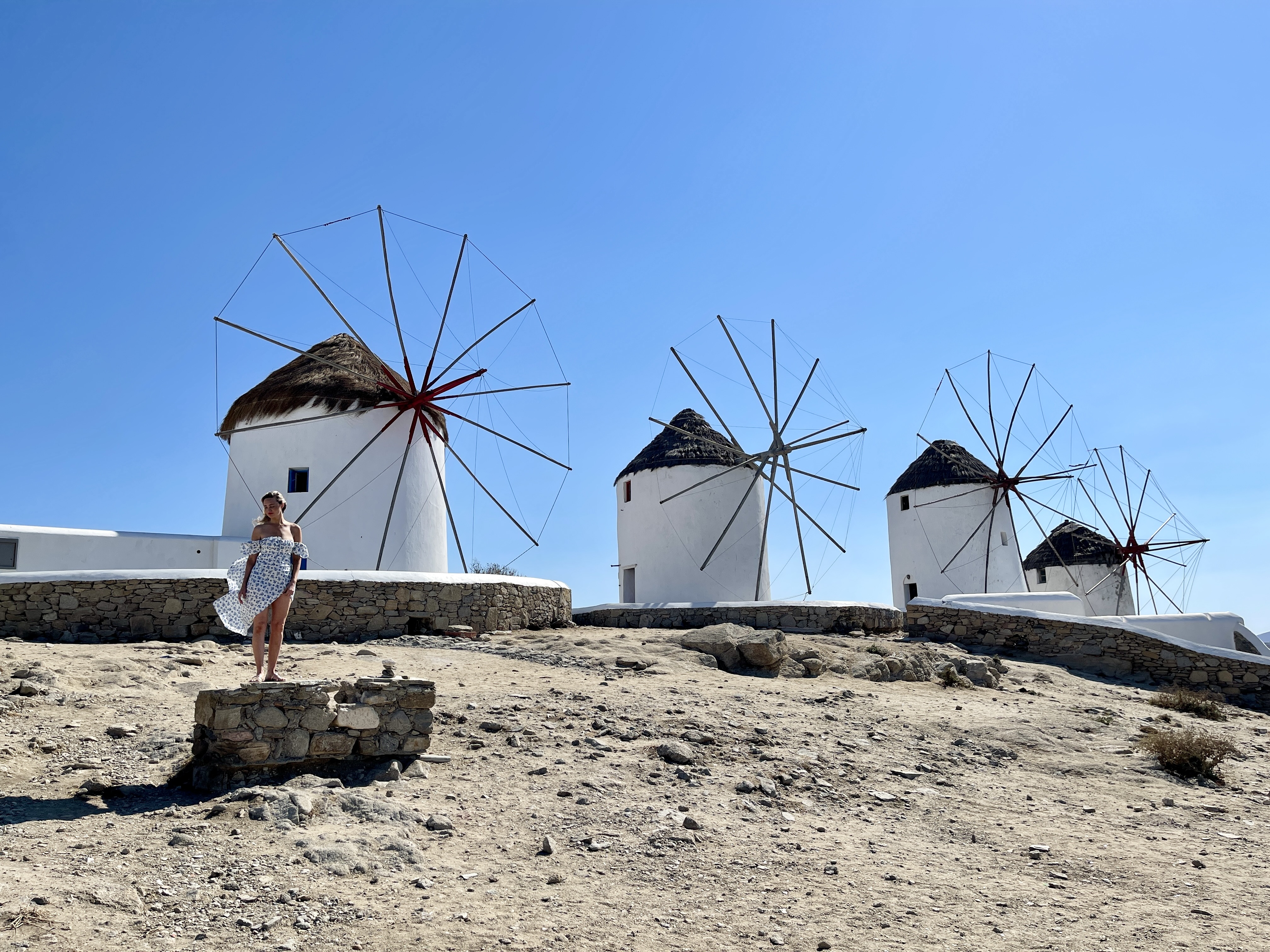 The most famous set of windmills on Mykonos and the brand of people you’ll see there | Photo: Evan Gove

But this story isn’t about grinding grain. It’s about how often I had to pick my jaw up off the stone paths slick from the sandals of millions of travelers lucky enough to see the sights for themselves.

What I loved most about the windmills is their constant presence. No matter where you’re meandering, there’s a good chance you can see one of the seven which line the hills of Mykonos Town. As you navigate the maze of slender streets, you turn the corners and one will eventually appear, dutifully standing guard over the people who once upon a time gleaned a major source of income from their spinning arms.

If you’re lucky, when you visit the most famous set, which sits atop a hill in town overlooking the Aegean Sea, you won’t be subject to the nauseating vanity of Instagram models and travel influencers grasping for “the perfect shot” and the cavalcade of likes and shares that follow.

I wasn’t lucky, but that’s okay – I hadn’t had a good smirk in a while.

Oh and before you go, I must confess, I did the same thing. 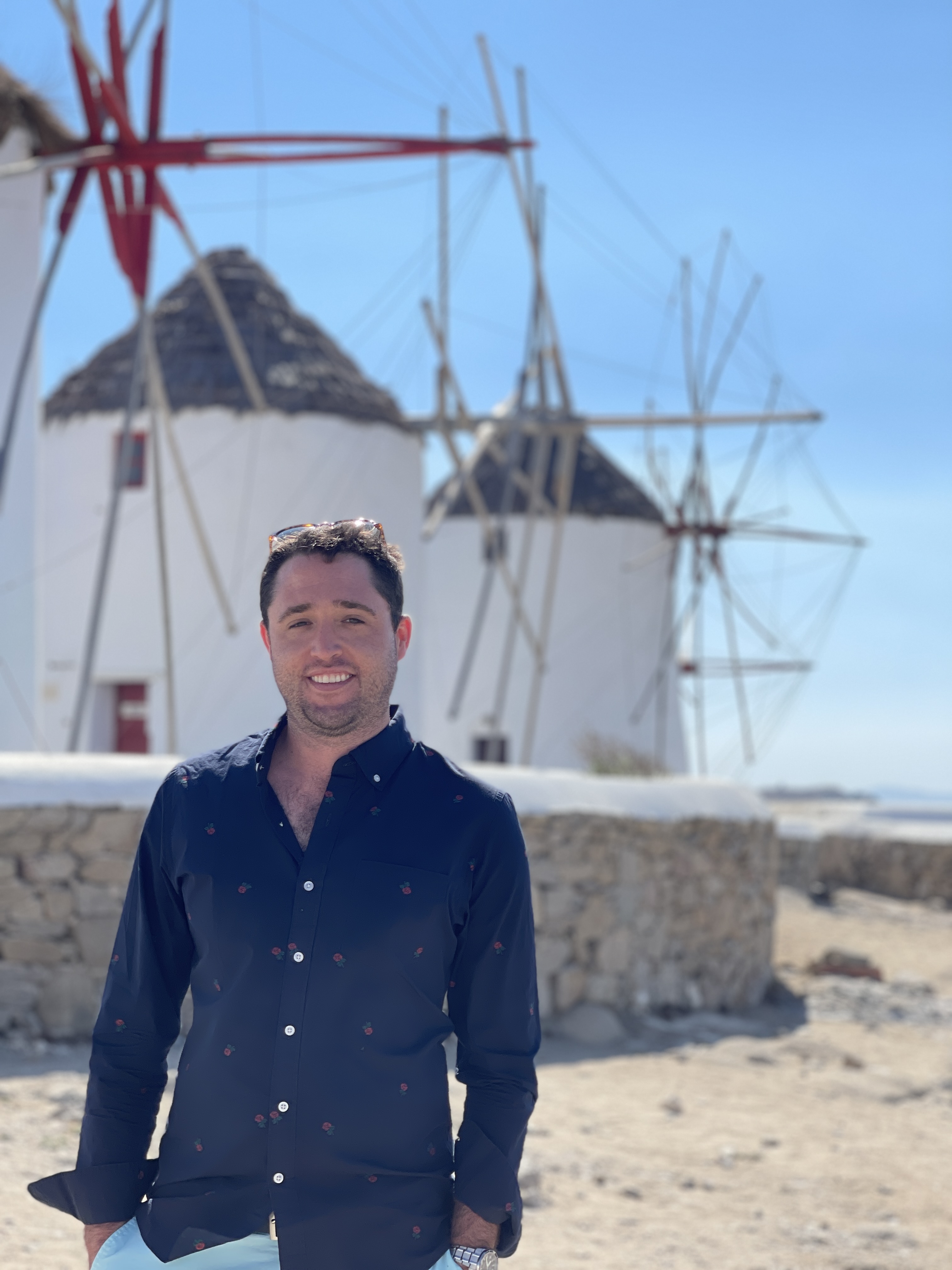