Yo Ho, Yo Ho – A Pirate’s Cruise for Thee 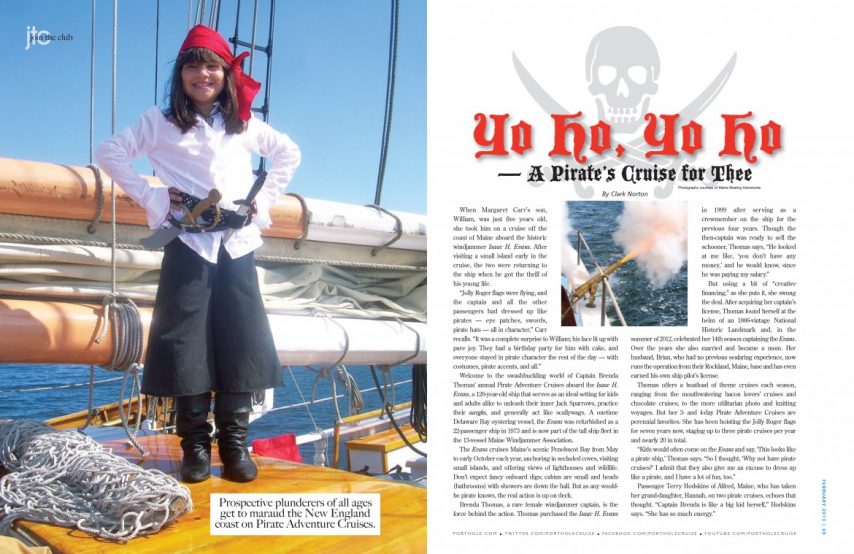 Yo Ho, Yo Ho – A PIRATE’S CRUISE FOR THEE

Margaret Carr’s son, William, was just five years old, she took him on a cruise off the coast of Maine aboard the historic windjammer Isaac H. Evans. After visiting a small island early in the cruise, the two were returning to the ship when he got the thrill of his young life.

“Jolly Roger flags were flying, and the captain and all the other passengers had dressed up like pirates — eye patches, swords, pirate hats — all in character,” Carr recalls. “It was a complete surprise to William; his face lit up with pure joy. They had a birthday party for him with cake, and everyone stayed in pirate character the rest of the day — with costumes, pirate accents, and all.”

Welcome to the swashbuckling world of Captain Brenda Thomas’ annual Pirate Adventure Cruises aboard the Isaac H. Evans, a 126-year-old ship that serves as an ideal setting for kids and adults alike to unleash their inner Jack Sparrows, practice their aarghs, and generally act like scallywags. A onetime Delaware Bay oystering vessel, the Evans was refurbished as a 22-passenger ship in 1973 and is now part of the tall ship fleet in the 13-vessel Maine Windjammer Association.

The Evans cruises Maine’s scenic Penobscot Bay from May to early October each year, anchoring in secluded coves, visiting small islands, and offering views of lighthouses and wildlife. Don’t expect fancy onboard digs; cabins are small and heads (bathrooms) with showers are down the hall. But as any would-be pirate knows, the real action is up on deck.