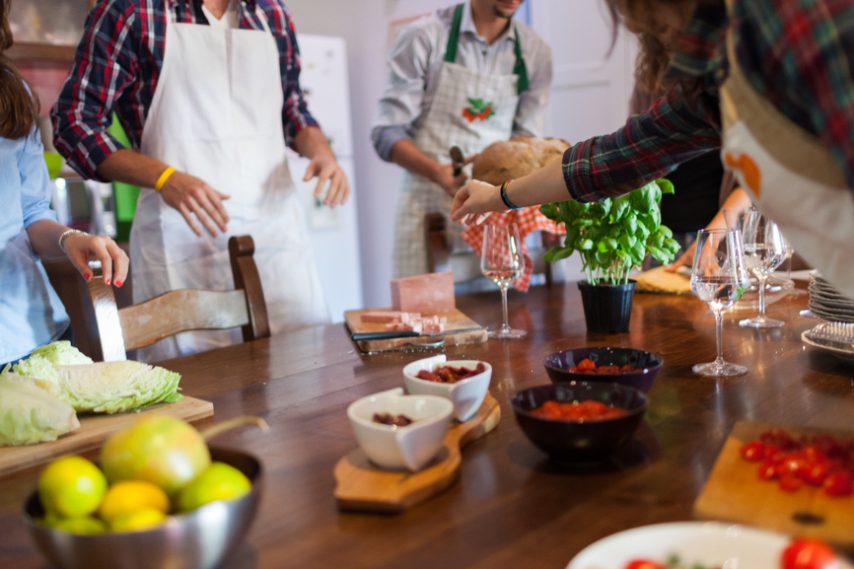 “Other cruise lines have one celebrity chef, but thanks to our partnership with the James Beard Foundation, we have an array of incredible culinary superstars in our ranks,” said Windstar president, John Delaney.

Guest chefs on the James Beard Foundation Culinary Cruise Collection will host an intimate cooking demonstration of a signature recipe that will be served on that cruise, as well as added to the rotating menu repertoire in AmphorA, Windstar’s main dining room. The small size of Windstar ships allows guests plenty of personal interaction with the chefs. Culinary demonstrations, special menu items, unique culinary shore excursions, and local market tours will also provide opportunities to indulge in memorable meals prepared with locally sourced ingredients by some of the most recognized culinary talent in the world.

June 16, 2017 — Cuisines & Cultures of Spain, Portugal, and France
Chef Annie Pettry of Decca in Louisville, Kentucky
Annie Pettry uses classic French techniques on Southern and Midwestern ingredients at her lauded Louisville restaurant Decca, where her wood-fired cooking program is a hot attraction. Inspired by locally farmed and small production ingredients, she’ll guide cruise guests through bountiful Portugal, Spain, and France. Fans of Top Chef will recognize Pettry from season 14. She is also an alumna of the James Beard Foundation Chefs Boot Camp for Policy and Change.

August 4, 2017 — Lands of the Midnight Sun
Chef Paul Berglund of The Bachelor Farmer in Minneapolis, Minnesota
Minneapolis Chef Paul Berglund celebrates Minneapolis’ Scandinavian food heritage at his restaurant The Bachelor Farmer, with fresh and simple dishes that change daily, making him the ideal fit for the journey from Iceland to Norway, and finally to Ireland. And as a former officer in the U.S. Navy, Berglund will be no stranger to sailing! Berglund is a James Beard Foundation award-winner for Best Chef Midwest.

September 2, 2017 — Gaelic Explorers
Chef Renee Erickson of The Whale Wins, The Walrus & the Carpenter, Barnacle, Bar Melusine, Bateau, and General Porpoise in Seattle, Washington
It’s been said that Renee Erickson’s restaurants are “the reason Seattle is one of the country’s most exciting places.” Chef/Author Erickson hallmark is an innovative approach to seafood and often described as European country cooking. Cruise guests will sail with her to Ireland and Scotland in search of the best coffee, whiskey, and scotch in port. Erickson is a James Beard Foundation award-winner for Best Chef Northwest.

November 10, 2017 — Jewels of the Windward Islands
Chef Keith Rhodes of Catch Restaurant in Wilmington, North Carolina
Wilmington Chef Keith Rhodes passion for seafood is the cornerstone of his restaurant Catch. Every ingredient in his delicious cuisine is consciously sourced from organic growers and local fisheries that support sustainable practices. He’s a fantastic fit to navigate the seafood options on this Caribbean sailing. Rhodes is recognizable from his time on Top Chef and is a James Beard Foundation award semifinalist for Best Chef Southeast.

January 20, 2018 — Icons of Southeast Asia
Chef Lee Anne Wong of Koko Head Café in Honolulu, Hawaii
Honolulu Chef Lee Anne Wong’s career has been a quest to explore global flavors, often cooking her fusion creations at New York’s James Beard House. She frequents kitchens in Asia and around the globe to discover new, exciting flavors and techniques. A Top Chef original contestant, Wong boasts a notable media career as television chef and author of Dumplings All Day Wong: A Cookbook of Delights from a Top Chef. Wong will lead guests from Hong Kong to Bangkok, tempting guests to try “not so familiar” foods whenever possible.

Windstar Cruises’ and the James Beard Foundation’s unique travel-culinary alliance, which began in 2016 and was expanded earlier this year, aims to elevate genuine local culinary encounters for cruise travelers. It also introduces travel enthusiasts to the important work of the James Beard Foundation, including focusing on sustainable food advocacy and identifying the vital influence that leading chefs and restaurateurs have in their communities.

The James Beard Foundation Culinary Collection is in addition to a marquee food- and wine-themed cruise in August with acclaimed chef, restaurateur, and author Hugh Acheson. The itinerary sails to the famed wine region of Bordeaux for an overnight stay and wine valley visit, as well as visiting the storied oyster beds of Northern France aboard the James Beard Foundation Epicurean Explorations of France, Spain, and Portugal voyage. Acheson’s longtime colleague Sommelier Steven Grubbs will cohost the cruise, leading four wine tastings, and pairing varietals and vintages to complement Acheson’s three chef demonstrations.

In addition, on each sailing starting this summer, Windstar guests will enjoy a James Beard Foundation recognized chef’s Signature Recipe on the dinner menu, created with local market ingredients whenever possible.

Foodies can also take part in Culinary Demos Powered by the James Beard Foundation. Director of Hotel Operations Peter Tobler and Corporate Executive Chef Graeme Cockburn will guide Windstar’s talented chef teams to prepare the recipes during an interactive cooking demonstration. Designed to impart tips from the culinary pros who have sailed in the region and been inspired by the ports they are visiting. Windstar fans will be able to try out the recipes at home from articles featured on the Windstar blog that will showcase the most recent recipes from the celebrated chefs on the James Beard Foundation Culinary Cruise Collection of sailings.