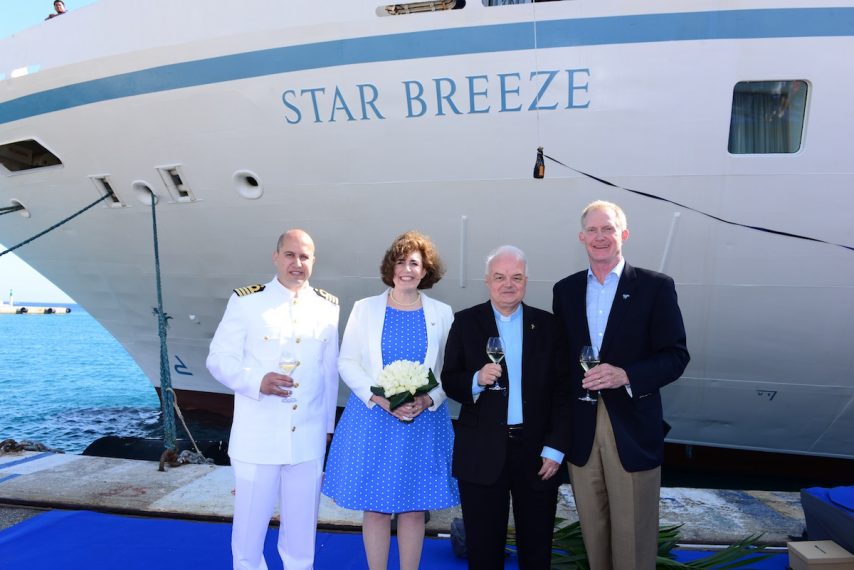 Pier-side on a sunny day in Nice, Windstar Cruises christened its fifth ship and second power yacht, the 212-passenger Star Breeze – one of three ships the upscale small ship line purchased from Seabourn.

“I can’t think of a more exciting time to be part of this company,” Windstar Cruises CEO Hans Birkholz told some 250 invited guests. “In three short years, we have doubled the number of guests who sail with us annually.”

Star Breeze‘s godmother, TripAdvisor.com’s travel advocate Wendy Perrin, said she’d first sailed with Windstar with her father and later on her honeymoon, so being aboard the small ship felt like “coming home.”

Perrin cut a blue ribbon, sending a bottle of Champagne clanking against the ship’s bow – members of the crew rescued the bottle and made sure it smashed. The ship then embarked on its inaugural sailing to Rome.

Under its new owners, Star Breeze (formerly Seabourn Spirit) was extensively overhauled during a 21-day dry dock in Italy. As on sister ship Star Pride, which transferred to Windstar last year, significant changes include a lighter, more contemporary, yacht-like décor, best displayed in the Yacht Club, a cool, windowed coffee bar and hangout spot in what was formerly a rather ordinary observation lounge.

New on Star Breeze, Windstar eliminated what officials said was an “underused” pool area in favor of a new outdoor terrace with canvas shade at The Veranda café. A new pool in the center of the ship has both swim-against-the-current and whirlpool features.

Up above, 4 feet was added to each side of the upper deck to create more space for outdoor lounging.

Star Breeze also has a new, living room-like space called the Star Screening Room, where movies will be shown (it’s in an area that was formerly a card room).

Sister ship Star Legend will be christened in Rome (Civitavecchia) on May 25. Star Pride will also be updated with the new pool, deck, and screening room features.

In addition to the power yachts, Windstar has three sailing yachts that carry 148 to 310 passengers.