Vitamin Sea: Relaxing on the River 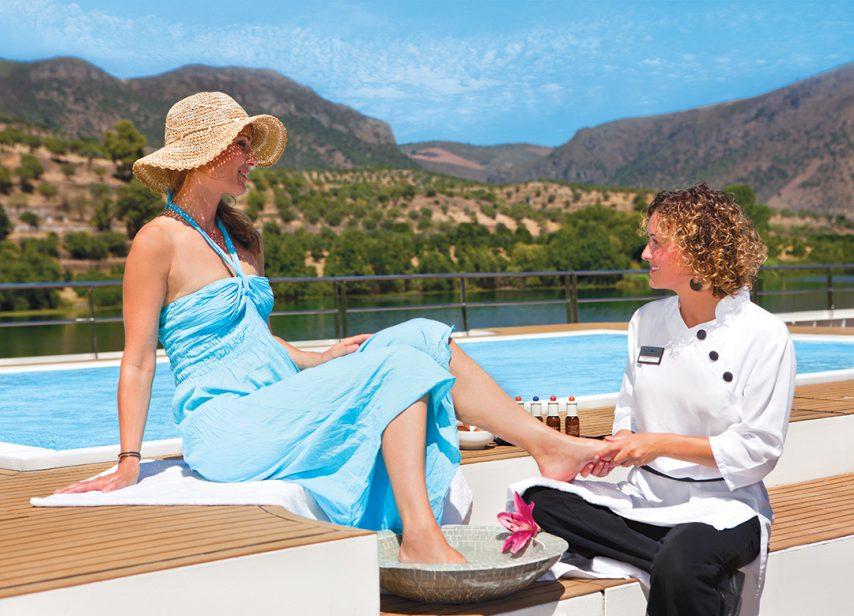 Relaxing on the River

A cruise aboard the 36-passenger river ship Avalon Myanmar on the Irrawaddy introduces you to an exotic land where few tourists have been before. The experience comes complete with visiting golden temples and riding elephants. And then there’s the tiny Burmese woman climbing onto your back.

The Myanmar Massage takes place in one of the ship’s two carefully lit, wonderfully scented massage rooms — quite an elaborate setup by river ship standards. A therapist works your pressure points using her hands, feet, knees, and elbows to get you to relax. At $40, the massage is a quintessential part of Avalon’s Irrawaddy experience. It’s also proof that you can get a great massage on a river ship.

Rivers determine the size of river ships. On popular routes such as Europe’s Danube and Rhine rivers, the ships need to fit into narrow, short locks and go under low bridges. Space is tight.

As a result, the word “spa” often indicates just a room outfitted with a massage table, staffed by one massage therapist who may double as the ship’s hairdresser and manicurist. In terms of other wellness facilities, you may or may not find a small pool or Jacuzzi, and if there is a fitness room it won’t be big enough for a crowd.

Viking River Cruises, the largest river cruise line, decided with its state-of-the-art Longships (nearly four dozen of the vessels are on European waterways as of this year) to offer spa options off-ship. Viking’s onboard concierge can make reservations, for instance, for you to try the signature Hungarian Moor Mud Treatment at the Four Seasons Gresham Palace in Budapest, near where your ship docks. In Cologne and Vienna, Viking arranges visits to traditional spas with pools fed by mineral springs.

Viking chairman, Torstein Hagen, said the decision to move off-ship was because shipboard wellness facilities are “underused, wasted spaces,” and he’d rather use the space for popular features such as outdoor dining at the ships’ Aquavit Terrace. But competing lines take a different tact in Europe.

All-inclusive luxury line Uniworld, for instance, has a.…