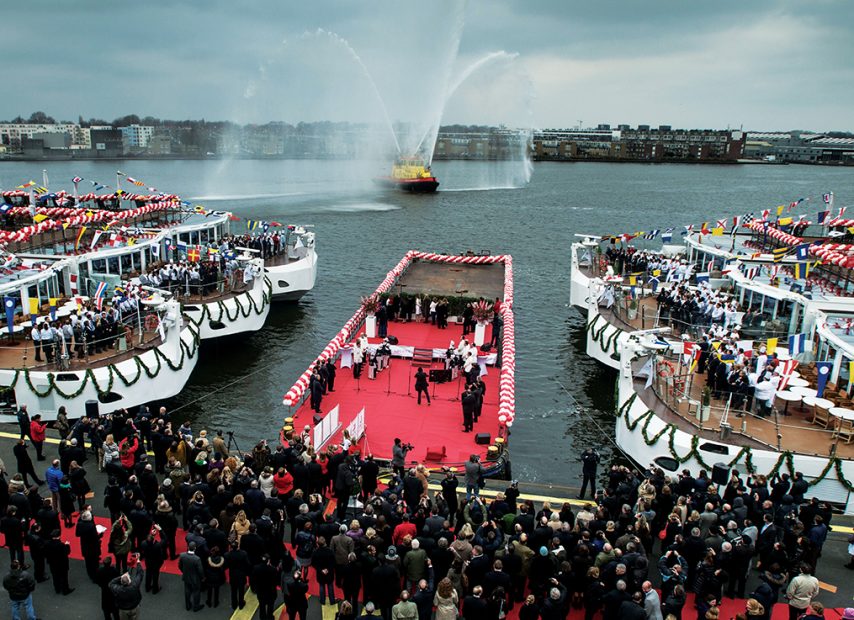 This spring, Porthole was on hand for the christening of 10(!) Viking River Cruises longships — who knows how many more there will be by the time you read this!

For anyone who doubts that river cruising is hot, hot, hot, consider that Viking River Cruises plans, by the end of 2014, to have introduced 28 nearly identical 190-passenger longships in three years on European waterways. The line recently christened 10 of the high-tech vessels in a ceremony in Amsterdam, a feat recognized by the Guinness World Records. That’s on top of four ships christened simultaneously last year.

Clearly, it’s good to be Viking.

Technically, Guinness counted eight of those ships toward the record (as two of them had been in the water since last year), but the point is clear: Viking is making a splash. Bringing on so many ships may seem risky, but Viking is the Big Kahuna of river cruising and, according to Viking chairman Torstein Hagen, the longships have proven “hot sellers” — the line’s 2013 season nearly sold out by mid-March. National sponsorship of PBS’s Masterpiece Theater, with its highly popular British period drama Downton Abbey, has helped create considerable buzz about the line. And while leisurely river cruising has traditionally attracted an older crowd, Viking has managed to tap into the trend of younger baby boomers looking for an alternative, up-close way to explore inland destinations.

But the line’s new ships are also an allure. Built at the Neptune Shipyard in Rostock, the ships are all named for Norse gods — “longships” being a reference to ancient Viking vessels. Despite tweaks in decor — some of the ships use more marble, others more wood — the vessels are virtually interchangeable. Pick the route you want; which longship you’re on doesn’t really matter.

So we discovered after touring several vessels and doing a two-day sample cruise on the newly christenedViking Aegir, named for the Norse god of the ocean.