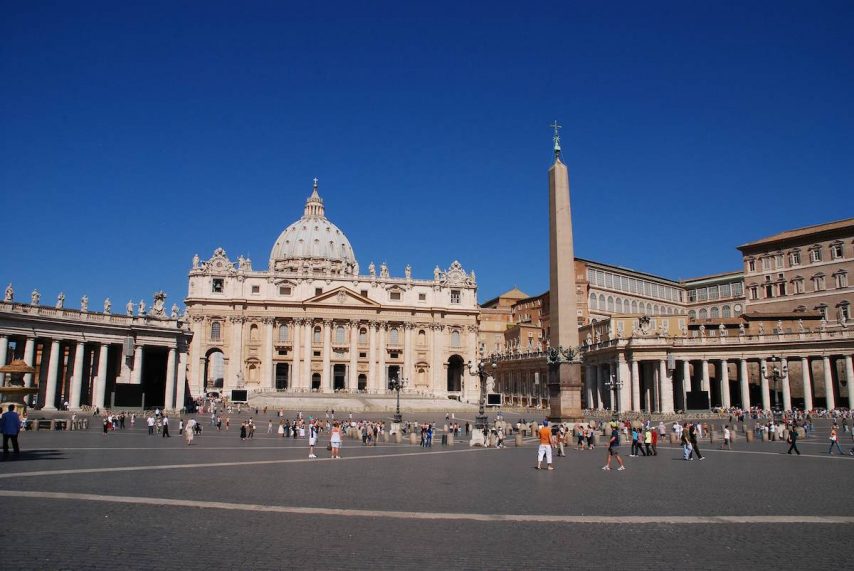 Room to breathe, a papal address — this is a trip with a difference.

I guess I should explain that I’m in Rome — day two of my incredible Luxury Gold Ultimate Italy itinerary — so it’s not as if I just happened upon the big guy on my way to work or at the grocery store.

Now, I have been to Rome many times before, most often sailing into Civitavecchia and traveling into Rome for sightseeing or a dizzying shopping spree around the Spanish Steps, but this time it’s different.

This time, I’m not on a cruise but a “tour” tour, and a glimpse of the Tiber River, Rome’s spouting fountains, and the bottles of Cialone mineral water that I guzzle under the hot Italian sun have been the only water I’ve seen thus far. (Odd for someone who mostly travels by cruise.)

The plan for today was pretty cool to begin with. Insight was able to swing admission to the Vatican Museum before the place opened to the public. Sure, I’ve been there before but always in an atmosphere that was not unlike enduring the mother of all mass-transit rush-hour commutes. Today, our group of 22 was able to just saunter on in, bypassing the thousands of people lined up like they were waiting for Bruce Springsteen tickets to go on sale or something. No question, we got some dirty looks from a lot of them as our group was just waved in but, seriously, in this life it’s all about who you know.

So there we were in the Vatican Museum, all-but-empty corridors filled with treasures spreading out before us. The Sistine Chapel? Glorious, glorious space! That’s right! When I raised my head to marvel at Michelangelo’s ceiling, it was the first time I’ve seen the masterpiece when I wasn’t afraid I was going to knock the person behind me’s teeth out since they were so close.

Had our day ended right there, the privilege of being on this trip would have been abundantly clear, but nooooo …. Insight wasn’t done yet.

And this is where the big guy comes in.

“By the way. We were able to get each of you tickets to the papal address in St. Peter’s Square. Would you like to attend that?” This, asked ever so casually by our tour director, Daniele, who’s one of those people who can do anything effortlessly and remains cheerful and smiling even when some dope on the tour loses her Vatican Museum ticket seconds after he hands it to her. (I later found it in a side pocket of my bag … ooops.)

“WTF????” is what I wanted to say about the papal address, but being a good Catholic girl, I knew instinctively that that was most certainly not an exclamation I should verbalize, particularly when it concerned the pontiff.

So clutching our tickets, on we strolled to magnificent St. Peter’s Square, joining other very, very, very lucky travelers from around the world to hear Pope Francis address us, giant screens projecting his image as he spoke from the covered altar.

Maybe gaining entrance to an event I never ever believed I’d be part of isn’t a travel miracle, but it’s darn close.