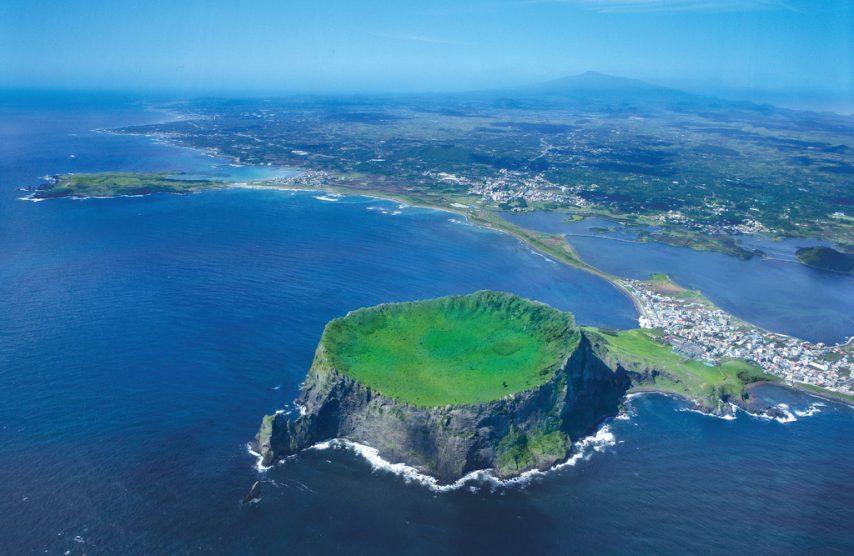 Located off the southern coast of South Korea is an island paradise that South Korean and Japanese visitors have enjoyed for years and that is only now becoming popular with tourists outside of Asia. It’s a smart destination for travelers wanting to visit South Korea in unique way.

Jeju Island was formed over 2 million years ago as the result of a volcanic eruption. It is a natural and historical wonder that boasts a volcano, a massive lava tube, an enchanting waterfall, and some unconventional museums. Jeju Island is often compared to Hawaii, but it is truly its own island with a unique culture, cuisine, and natural beauty. Since the island is not connected to the rest of South Korea, the people of Jeju Island have a distinct culture and language that you won’t find anywhere else on the Korean Peninsula. Take a cruise to South Korea and explore this captivating island. Discover why the residents of Jeju Island call it the “Island of the Gods”.

Jeju is a volcanic island, so no trip there would be complete without hiking up Mount Hallasan, a shield volcano and UNESCO World Heritage Site that is located in Hallasan National Park. This is South Korea’s highest mountain and it is extremely sacred to the people of Jeju. Taking a hike up the mountain offers a chance to view Jeju’s beautiful flora and fauna. Another must-see geographical spectacle is Seongsan Ilchulbong (Sunrise Peak), which is a tuff cone crater that you may or may not mistake for a castle. It was formed by volcanic activity, hence why it has such a unique shape. Climb to the top of the peak and witness the most stunning sunrise you’ll ever have the opportunity to see, along with breathtaking views of the sea. Manjanggul Cave is yet another spot in Jeju that was born out of volcanic activity. Lava once flowed through Manjanggul, but now it is a cave that has interesting formations created by the lava and is home to a large population of bats.

To learn about a Jeju legend and to view another one of Jeju’s natural wonders, visit Cheonjeyeon Falls, also known as “The Pond of God.” According to legend, seven nymphs from heaven bathe in the three-tier waterfall every night. Seonimgyo Bridge arches over Cheonjeyeon Falls and features a depiction of the nymphs. Visitors to Jeju Island will also enjoy Hallim Park, which is filled with gardens to wander around in, including the Tropical Botanical Garden, Palm Tree Garden, and Kiwi Fruit Garden. There are two caves located in the park: Hyeopjae and Ssangyong. These caves are the only two-dimensional caves in the world. Hallim Park is a great place for kids, who can visit the folk village or the amusement park.

For some quirky cultural experiences, head to one of Jeju Island’s museums. The Teddy Bear Museum is an adorable place that has a collection of hundreds of teddy bears, some of which are over 100 years old. You’ll also find giant teddy bears, bears dressed like Elvis and the Beatles, and bears that are posed to look like the Mona Lisa or WWII soldiers storming Normandy. That museum is for the kids and the young at heart, but for the adults, go to Jeju Loveland, which is a sculpture park where you can find 140 sculptures which all revolve around sex. Gimnyeong Maze Park is for both kids and adults and is a unique experience that the entire family will enjoy. The park also has flora from all over Asia. Learn more about Jeju’s nature and culture at the Jeju Folklore and Natural History Museum, where you can view Jeju’s traditional architecture and see the diving gear of the Haenyeo, who are female divers that began taking over the island’s diving industry in the 17th century.

RELATED: 3 Ways to Spend the Day in Gangneung, Korea

Near the port are many places to shop and to try some of Jeju Island’s food. Jeju Dongmun Traditional Market sells fresh seafood, Jeju black pork, kimchi, and chocolate. Jeju Jungang Underground Shopping Center is the place to buy clothing, Korean cosmetics, and souvenirs. For some Jeju eats, make your way to Guksu Geori, also known as “Noodle Street,” where you can dine on Jeju’s famous pork broth noodles in one of the many noodle shops. For more pork, go to Heuk-dwaeji Gori (“Black Pork Street”).

Jeju Island is unlike any other place in Korea. With its volcanic history and its extraordinary culture, Jeju Island is a cruise destination that offers excitement and adventure. Jeju Islanders associate their island with the gods and for a good reason. The South Korean island’s nature and culture are certainly worthy of divine status.