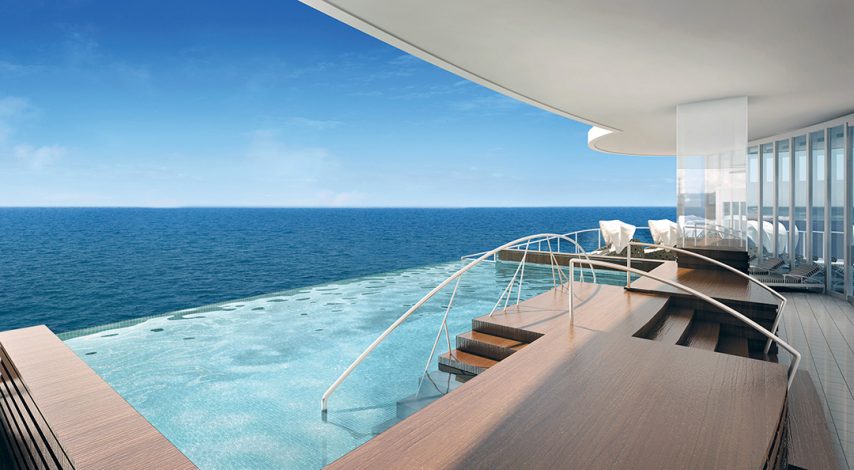 Hats off to this 2016’s newest cruise ships.

This year is an active one for ship debuts. In fact, the class of 2016 includes two ships expected to be more luxurious than anything before seen on the high seas, as well as the debut of the newest world’s largest ship. So fasten your seatbelts for the year ahead. It’s going to be a wild ride.

Regent Seven Seas Cruises will expand by 40 percent with the addition of its new $450 million flagship, and the line has not been shy about promoting the 750-passenger Seven Seas Explorer as the “most luxurious ship in the world.”

The all-suite, all-balcony ship certainly has the most fancy suite afloat — the Regent Suite boasts 3,785 square feet, which includes an in-room spa — and that’s not the only house-sized suite on the ship. According to the line, the space-per-passenger ratio on Seven Seas Explorer is an industry chart-topper.

The posh set on board will hang out in spaces including a two-story theater themed on the glitz and glamour of Old Hollywood. The opulent pool area will be done up with teak-like decking and marble and stone accents while the Canyon Ranch SpaClub gets its own Swarovski crystal sculpture, which is part of the ship’s collection of designer furnishings and eclectic art. New restaurants include the Pan-Asian Pacific Rim and the Parisian-influenced Chartreuse.

Feature that has us most excited:
Sign us up for classes at the line’s first cooking school, The Culinary Arts Kitchen, a state-of-the-art, ocean-view facility equipped with 18 cooktops (extra fee applies).

Where it’s going: Seven Seas Explorer debuts in Europe in July and Miami in December.

Seabourn’s largest ship and its first in five years is also the first ship to be entirely designed by noted hospitality designer Adam D. Tihany. Inspired by the theater, the line named the 604-passenger ship Seabourn Encore, and Tihany promises contemporary drama in The Restaurant, Seabourn Square, and other spaces. The all-suite, all-balcony ship has one deck more than the line’s 450-passenger Odyssey-class ships, so there’s more room to play.

Passenger perks will include dining on cuisine by noted American Chef Thomas Keller. The ship’s yacht-inspired suites will range from nearly 300 square feet to the more than 1,300-square-foot Wintergarden suites, which come with a private ocean-view solarium. The Grand Salon will be outfitted with pivoting chairs and a cabaret atmosphere, while the signature lounge, The Club, is getting a contemporary look with yachting references. Expect a lush and expansive pool deck topped by a favorite hangout spot, the Sky Bar.

Feature that has us most excited: You’ll find us aft on the Club Terrace, which is outfitted with a plunge pool and two whirlpools.

Where it’s going: The ship debuts in December with sailings in Arabia, India, and Southeast Asia and then cruises Australia and New Zealand.

The 2,650-passenger Koningsdam is Holland America Line’s first Pinnacle-class ship and the largest ship the line has ever built. It’s also the first new Holland America ship since 2010, and the first in the line’s 141-year history to be called Koningsdam.
Expect a light-filled, contemporary….