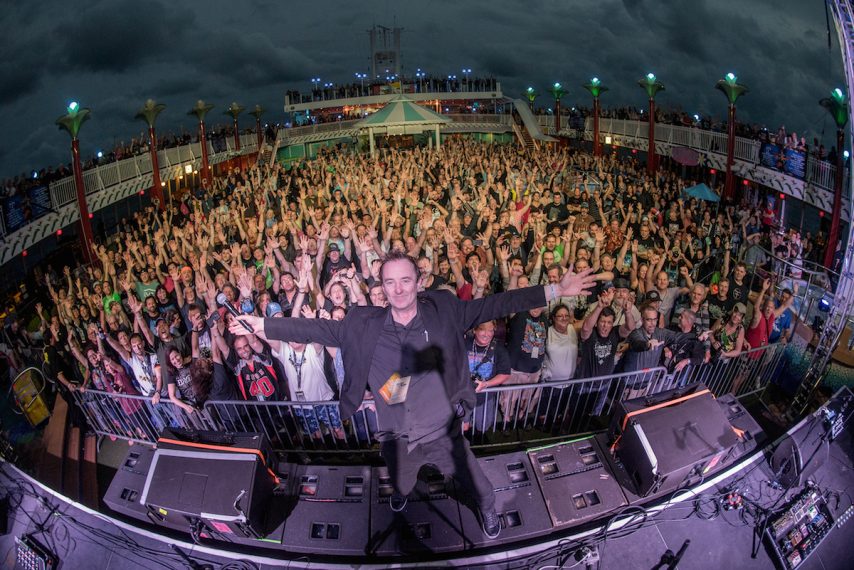 This Ship Will Rock

Summer’s arrived! I say this as I’m sitting here, sweltering in a tank top, wondering if it might be time for the season debut of my air conditioner.

But, oddly, my mind is focused not on fun in the sun but far ahead to the snowy days of February and what I’m going to do to celebrate my 60th — yes, 60th — birthday.

I’m thinking about marking the milestone with Cruise to the Edge, a 4-day ocean-going progressive-rock music festival aboard Royal Caribbean’s Brilliance of the Seas. We’d set sail on February 7 from Tampa and call at Cozumel, the single-port itinerary allowing two full sea days filled with dynamic performances by headlining band Yes, Steve Hackett, Kansas, and many more.

This is one way I can guarantee that I won’t sail into my 60s surrounded by bikini-clad 20-somethings who make me feel older than I already am.

I’m pleased to say that I’ve often been told that I look younger than my years and while I’m grateful for the minimal wrinkles and few gray hairs (but, seriously, what’s with the chin whiskers?), my cruise history, something that I’d doubtlessly reveal in conversation aboard a typical sailing, pretty much announces that senior status lurks just around the corner. Nothing says “old” quite like having caught every episode of The Love Boat when it was originally broadcast or admitting that your first cruise was in 1976 aboard Carnival’s Mardi Gras. Even the fact that Cruise to the Edge would be my first Royal Caribbean sailing since Song of America screams that I’m no spring chicken.

Cruise to the Edge will surround me with my contemporaries and take me back to the glorious 1970s and those carefree days of my youth. If any LP formed the soundtrack to my high school years, it would be Yes’ 1972 album Close to the Edge. In fact, my first boyfriend once gave me a very intense kiss that lasted the entire duration of the album’s second side — not a very pleasurable experience for anyone who’s fond of breathing and even now I experience a mild panic attack when I hear the opening strains of “Siberian Khatru.”

Nothing beats marking a major milestone of your life on a cruise. I was married aboard ship, celebrated many anniversaries at sea, saw my 50th birthday in from the deck of SeaDream II in Buenos Aires and now I hope to enter my next decade dancing and swaying to the music of my youth aboard Brilliance of the Seas.

And I guess that means I have to stop laughing at how silly old people look while they’re dancing.