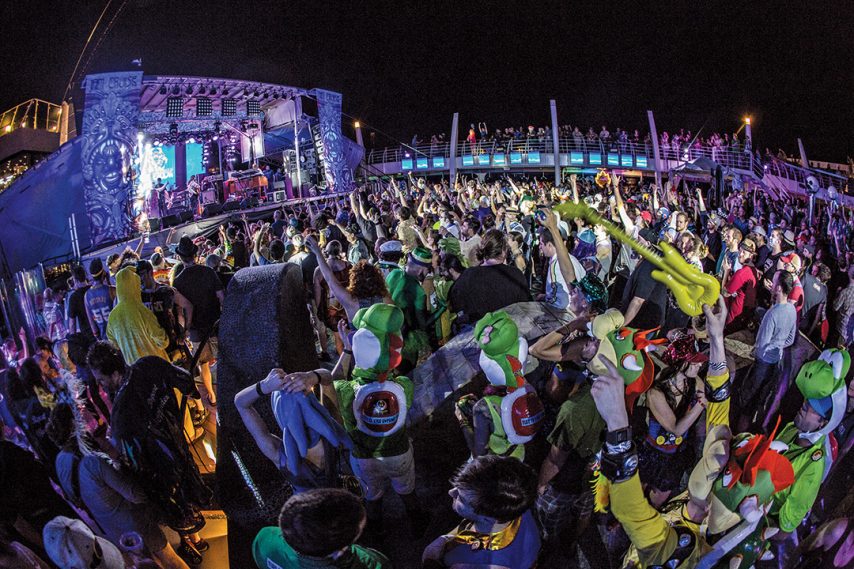 What the artists, fans, and organizers say about music-themed cruises.

While retirees and young professionals might not always share the same taste in music, one leisure activity with appeal that spans generations is the music festival experience.

So cruise lines and vacation planners have come up with a successful way to capture that excitement, making rock ’n’ roll–themed cruises today’s popular version of “floating festivals.” Varying widely in scope and character, all combine the thrill of live music and the excitement of a cruise, while erasing the barriers between concertgoer and performer. Here’s just a sampling of what those involved have to say about these rockin’ experiences.

Where the Action Is

The nostalgia-themed Where the Action Is Cruise features pop stars from the 1960s. The annual event grew out of conversations between ’60s bandleader Paul Revere and his Boise, Idaho–based travel agent.

“This coming January will be our 24th year,” says Tammy Selee of Concerts at Sea, which organizes the cruise. Unlike some other music-themed cruises, the WTAI cruise is limited to 800 passengers, and reserves only a portion of the ship. Keeping its human scale has allowed the Where the Action Is cruise to flourish.

Using the onboard theater and ship lounges for its activities, Concerts at Sea creates a cruise-within-a-cruise experience. The demographic for the WTAI cruise falls mostly into the 65- to 70-year-old range, and many are fiercely loyal.

“There’s no group of people more nostalgic than baby boomers,” says Selee. “We’ve got people returning for their 18th cruise with us. Before I get off the ship at the end of the cruise, more than 200 people are booked for the next one. It’s become a family reunion without the family!”

Unfortunately, Revere passed away in 2014, but his band, led by son Jamie, continues to headline the cruise, along with 1960s hitmakers Mitch Ryder, The Cowsills, and several others.

“The meeting-and-greeting is constant,” said singer-guitarist Bob Cowsill, who’s gearing up for his family band’s third cruise. “We [performers] get to know our fans. The connection is really special; it stays with us after the cruise ends.”

Cloud 9 Adventures has been hosting music-themed cruises since 2004, says Kelly Viau, the company’s director of business development. On the roster is Jam Cruise, which focuses on musicianship and the interplay between top-notch players. The full-ship event in 2017 aboard Norwegian Pearl will attract between 3,000 and 4,000 people for the annual sailing.

According to Viau, Jam Cruise attendees come from all over North America, skew between 35 to 50 years old, and are fairly evenly….