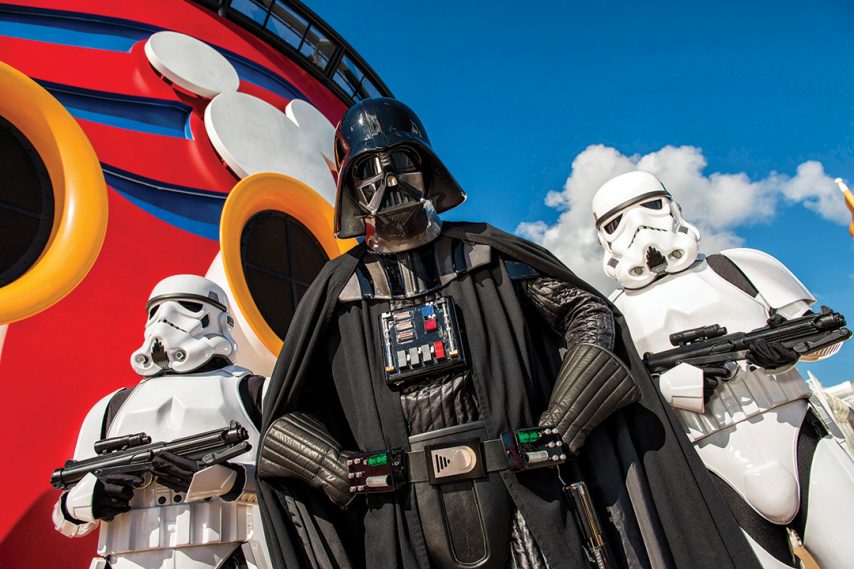 May the Force Cruise with You

What happens when you combine Disney Cruise Line with Star Wars? You get an awesome intergalactic experience out in the open Caribbean Sea.

Unless you’ve been frozen in carbonite for the past year, you undoubtedly know that Star Wars fandom is back in full swing with the juggernaut film Star Wars: Episode VII — The Force Awakens proving a cinematic hit both in theaters and on home video.

So, when it came time to populate a sea day on the ship, it only made sense that C-3PO, R2-D2, Chewbacca, Darth Vader, and even Captain Phasma from the new movie came along for the ride during the special Star Wars Day at Sea theme days aboard Disney Fantasy.

Imagine strolling the decks to the tune of John Williams’ iconic Star Wars film scores. Then picture impromptu encounters with imperial officers in the atrium, stormtroopers patrolling the pool deck, and Boba Fett perched on the smokestack. Even the lesser-known Zam Wesell and one of Jabba the Hutt’s Gamorrean guards might be seen wandering about.

While the Star Wars theme is mostly relegated to the singular sea day extravaganza, exclusive themed merchandise including apparel, collectibles, and artwork is available throughout the entire cruise, and screenings of the prequel and classic trilogies are scheduled in the Buena Vista Theatre. Of course, Episode VII is presented in the larger Walt Disney Theatre several times, and next year the new Rogue One: A Star Wars Story film will be added into the mix.

Elsewhere, the Star Wars Rebels television show and old Star Wars film trailers play on the poolside Funnel Vision screen. “The Imperial March” 9-note phrase blasts on the ship’s horn, fun remixed versions of the score are belted out at the on deck Galactic Dance Party, and lounge renditions are piped in at the adults-only Europa district.

Meanwhile, guests who are not yet experts in the franchise, or those looking for a refresher course, can be brought up to (light) speed during an insightful Star Wars 101 session. And during the guest speaker series, Wendy Anderson, Executive Creative Director, Walt Disney Imagineering, shared where Star Wars attractions are available in the shoreside Disney parks.

The best part is that there’s something for all ages. Children partake in Padawan crafts and trivia at the Padawan Mind Challenge (adults similarly at the Star Wars Superfan Contest), and tweens and teens can…