Theme Cruise: All aboard American Queen 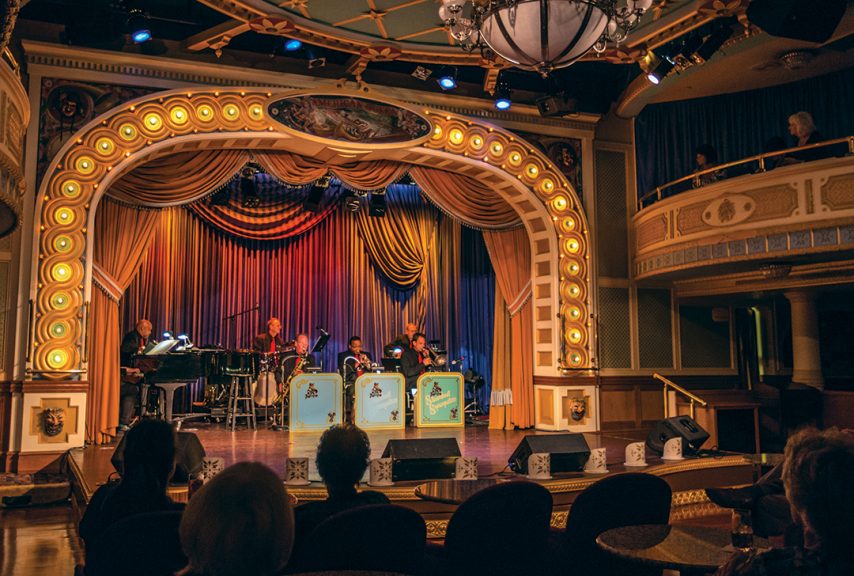 All aboard American Queen for a swinging good time

A week before I was to set sail on American Queen Steamboat Company’s Big Band Swing theme cruise, I found myself Googling the headliner: Lynn Roberts. Turns out, the 81-year-old legendary swing vocalist has sang with renowned performers including the Dorsey Brothers, Harry James, and Doc Severinsen.

This time, she’d be belting it out with American Queen’s swing band, the Steamboat Syncopators, during a three-night Mississippi River cruise that also promised classic Southern experiences from plantation and garden tours to traditional music and cuisine.

Along the River
Boarding in New Orleans, it’s a pretty cool vista to spot the big, red, churning paddlewheel docked along The Riverwalk. To really kick off the fact that this was a Big Band theme cruise, several swing band members were playing on deck, a spirited welcome to boarding guests.

Theme cruise or not, aboard American Queen you’ll find quaint touches such as a resident riverlorian, who gives entertaining and educational talks on topics from the river system to night watch navigation, small calliope concerts on deck as you depart port, and tours of the pilot house or engine room, which are open for viewing.

Plenty of other details remind you that you’re most definitely on the river: staterooms are each named after a different river, city, president, or other notable; daily cocktails including a mint julep and an old fashioned made with bourbon; and on your pillow at night you’ll find legendary Aunt Sally’s pralines.

By day, you can relax on the forward Front Porch, complete with rocking chairs and porch swings for two, utilize the small swimming pool or fitness center, or even indulge in the AQ Spa by Pevonia, where you can select from a range of treatments including wraps, scrubs, facials, massages, manicures, and hair services.

In port, select from included and optional shore excursions, or take advantage of a fleet of bicycles to rent (free of charge) to ride into town or along the levee. During our two Louisiana port calls, for example, shore excursions included a Cajun Swamp tour, as well as tours of Nottoway Plantation, Oak Alley Planation, the Laura Creole Planation, or Plantations of the Great River Road.

Back on board, take the time to admire American Queen’s impressive collection of art — from 70 pieces by river painter Michael Blaser to the Olympic torch from Atlanta’s 1996 Summer Olympic Games. There are plenty of quaint and comfortable spaces from which to relax and watch the river go by, whether it’s….