Silversea’s Silver Spirit Gets Cut in Two and Lengthened 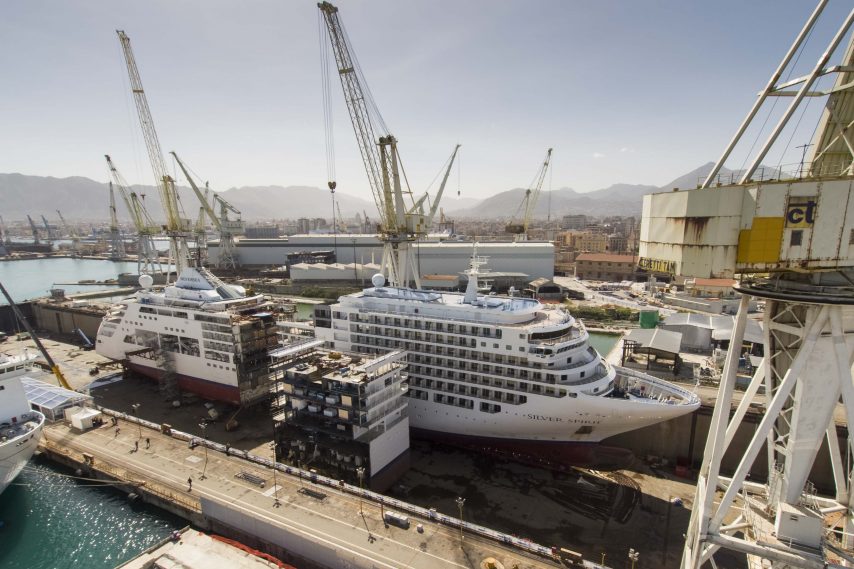 A great spectacle of naval engineering, Silversea’s Silver Spirit has been cut in two at Fincantieri Shipyard in Palermo, Italy, as part of her planned lengthening. A prebuilt 15-meter (49-foot) segment was inserted and the ship is now being reconnected. The rare lengthening project will create more space in public areas and will enhance Silver Spirit’s facilities. 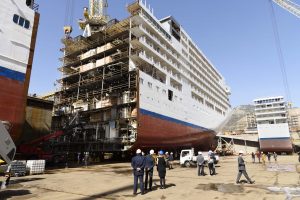 The dissection of the 36,009-ton ship and the maneuvering of the vast new mid-section into place, were done with military precision, a rarely performed feat of maritime architecture.

“This ambitious project will amplify the onboard features that matter most to our guests,” said Barbara Muckermann, chief marketing officer of Silversea. “We are taking our flagship, Silver Muse — which was delivered by Fincantieri in April last year — as the point of inspiration for a fleetwide renovation program.” 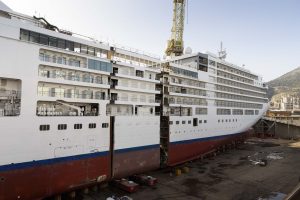 Outside, the pool area on the sky deck will increase in length (from 30 to 45m/from 98 to 148 feet) to offer additional space for relaxing and a new fitness area will also be created. Inside, the Zagara Spa concept will be installed, as will a new free weights room, which will complement the upgraded fitness center. The Arts Café and Dolce Vita — two new, sophisticated public spaces — will improve the onboard entertainment options, and all suites will be refurbished to maintain Silversea’s level of quality. Based on the chic décor aboard Silver Muse, Silver Spirit will gain beautiful interior design upgrades throughout.

Departing on May 6, 2018, Silver Spirit will recommence her service with a 7-day cruise between Civitavecchia (Rome) and Barcelona.

Check out the cool lengthening video:


Silver Spirit By the Numbers

Prior to Silver Spirit’s arrival in Palermo, the ship docked in Chania, Crete, where Silversea made a charitable donation of used furniture to a number of the island’s worthy causes. As a destination visited by Silversea’s cruises and as an island in need, Chania was identified as a deserving recipient of the donation. In total, 11 containers were filled with 4,652 items from the ship — including sofas, chairs, curtains, computers, and more. The donated articles will be put to use for social welfare purposes in hospitals, nursing homes, schools, and other institutions across the island.