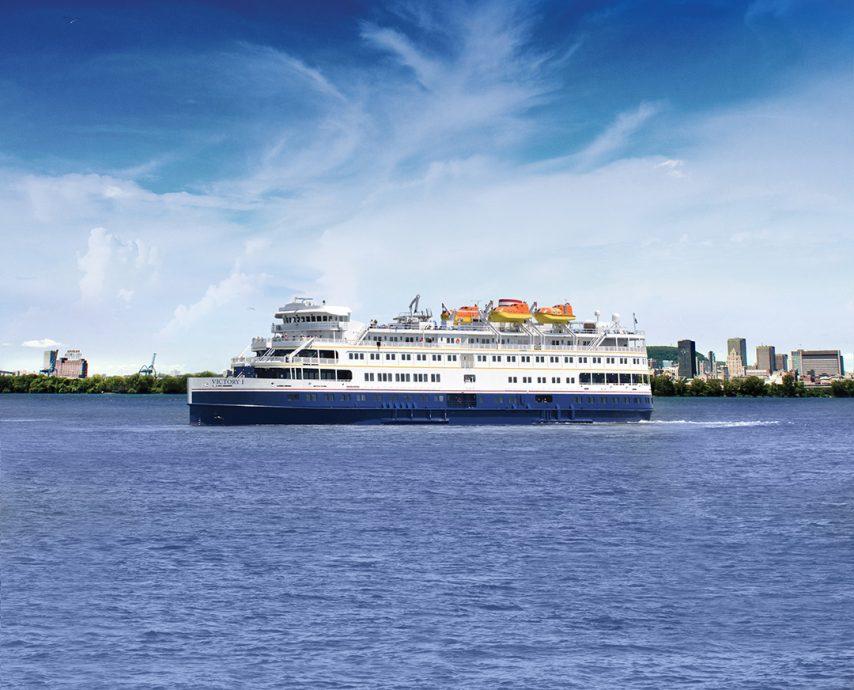 V is for Victory

Meet the small ship with big character: Victory I

When it comes to small ship luxury cruising, there’s a new cruise line and ship for adventurers to consider: Victory Cruise Lines’ Victory I.

Launched in July 2016, Victory Cruise Lines connects passengers with grace, style, and luxury to fascinating cultures along untapped itineraries. Embark on memorable seasonal voyages throughout the Great Lakes and French Canada & New England during the summer months and out of Miami to Cuba in the winter. But no matter the route, life aboard Victory I is relaxing with a slower pace than most cruise ships.

Built in Jacksonville, Florida, in 1999 as Cape May Light, and having several other names over the years including Sea Voyager and Saint Laurent, the 300-foot long, 210-passenger Victory I was designed for coastal cruising. With 90 crewmembers, Victory I coddles her passengers with superb service and style that is often found on luxury ships. The entire crew, from the captain to the waiters, are seasoned professionals, and many came from working on the bigger cruise ships.

The majority of the 105 staterooms are on Decks 3 and 4; staterooms on Deck 4 open to an outside deck area. The average stateroom size is around 160 square feet, but don’t let that smaller size distract you from the fact that the beds and linens are extraordinarily comfortable with premium mattresses, 100 percent Egyptian cotton bedding, deluxe duvets, and a choice of pillow options. Other stateroom amenities include personal robes and slippers, high-end bath amenities that are environmentally sensitive, and LCD flat-screen TVs with satellite.

True evidence of a luxury cruise can be found in the quality of the menu and the consistently excellent taste of the cuisine by a master chef. Indeed, the Shearwater Dining Room on Deck 1 was a favorite gathering place for passengers because the daily menu is exquisite. The best seats in the restaurant are next to the large picture windows, and the wait staff makes an effort to quickly remember passengers’ names and preferences.

There is also the option to dine on deck at the outdoor Cliff Rock Bar & Grille where the specialty on the menu is Hot Rock cooking, where diners cook their own steak or fish on an authentic volcanic lava hot rock. (Reservations are suggested because there is limited seating.)

For more mingling, the casual Seascape Tavern is a cozy spot to relax with fellow cruisers in the comfort of a traditional English-style tavern. In the early evening, live musicians perform favorite songs. The Compass Lounge is another comfortable spot to log onto the ship’s free WiFi, attend an enriching presentation by an onboard specialist, gather around the grand piano for an old-fashioned sing-along, or enjoy after-dinner music and dancing.

Deck 5’s Observation Deck Lounge and Sun Deck is the perfect spot for reading a good book in a deck chair and watching the scenery float by. Lounge on comfortable, cushioned outdoor sofas by day or gather for the evening sunset at night.

Unique to small ships, Victory I even boasts the Latitude Salon & Spa, offering massages and beauty treatments. Other nice perks include free-flowing house wine, beer, and spirits during the entire cruise; themed afternoon tea service; onboard and engaging specialists; and included shore excursions.
When it comes to entertainment, veteran cruise director Michael Crowe brings a classic approach with traditional games of Bingo, the newlywed game, and trivia. In addition, attendance was excellent for an informative lecture about the prohibition era and a talk by an esteemed geologist about the Great Lakes region.

Our first day took us to Niagara Falls for an epic excursion on the Hornblower, right into the wake of the massive waterfalls when everyone is given a red raincoat for protection from the spray. Later, we headed to the Château des Charmes winery for a tour followed by a delightful lunch.

The day in Port Weller began with a visit to Detroit’s Henry Ford Museum, which houses hundreds of fascinating items from history including the limousine that President John F. Kennedy was assassinated in, a full-size DC3 aircraft, and a replica of the Wright Brothers airplane, the 1903 Wright Flyer.

Crossing the border of Canada and Michigan was simple, and a day cruising Lake Huron was the perfect time to unwind before our next port adventure. In Little Current, we visited the Ojibwe Cultural Foundation, which was created to preserve and revitalize the language, culture, arts, spirituality, and traditions of the Anishinaabe People of Manitoulin Island and the surrounding areas. Here we enjoyed an up-close performance of a traditional Ojibwe dance led by the beating of a drum.

In Sault Ste. Marie, we crossed the gangway of the Valley Camp museum ship, which was originally launched in 1917 for the Producers Steamship Company. The tanker served on the Great Lakes for nearly 50 years, and is now listed in the National Register of Historic Places as a historic vessel. Inside is a collection of more than 100 exhibits made up of fascinating artifacts that tell the story of the Great Lakes including a life boat from Edmund Fitzgerald, a freighter that sank in a Lake Superior storm on November 10, 1975, with 29 men on board.

When Victory I docked at Mackinac Island, we boarded a horse-drawn carriage tour. (In fact, no motorized vehicles are allowed on the island. All transportation is provided by horse and carriage or bicycle.) The tour concluded with a fabulous lunch in the Grand Hotel, which opened in 1887 and is truly like stepping back in time. The majestic hotel hosted five U.S. presidents, Thomas Edison, and Mark Twain, and served as the set of the 1980 Christopher Reeve and Jane Seymour movie, Somewhere in Time.

Experiencing local flavor, culture, and history is a highlight of Victory I’s itineraries. But no matter which journey you’re on, you’ll experience a wondrous ship, a fabulous crew eager to serve with a smile, fascinating ports and excursions, delightful cuisine, an all-inclusive ambience, and like-minded passengers who become fast friends.

I consider Victory I a “happy” ship, but perhaps Crowe defined the experience best: “There are good ships and bad ships, but it’s the friendships that really count.”