Ignorance is not bliss. You’ll want to know every inch of Norwegian’s largest, latest, and greatest ship yet. 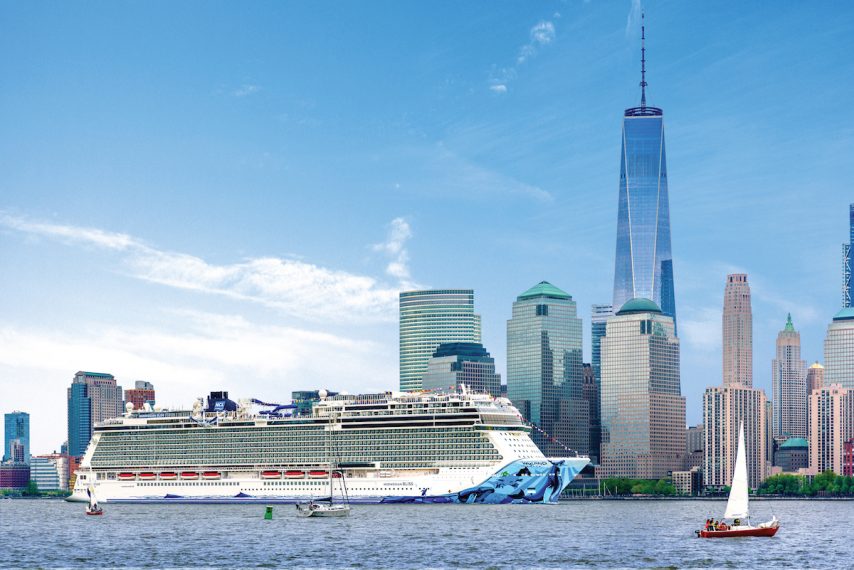 Majestic Alaska! A land of infinite beauty, magnificent wildlife, fascinating history … and weather so changeable that the smart traveler will pack everything from skimpy tank tops to a parka, gloves, and certainly an umbrella before embarking on a journey to the Last Frontier.

No question this was in the minds of those behind the creation of Norwegian Bliss, Norwegian Cruise Line’s latest addition and a ship purpose-built for Alaska cruising, complete with colorful Alaska-inspired hull artwork by marine life artist and devoted conservationist, Wyland. Bliss is packed with so many innovative and exciting features both inside and out that it no longer matters what conditions the Great Land throws at us. And, of course, those extraordinary features will be just as appealing to cruisers once the Alaska season ends and Bliss heads down south, through the Panama Canal, for her inaugural Caribbean season.

Norwegian Bliss: This Ship is Big

At 168,028 tons and 4,004 passengers, Norwegian Bliss is the largest ship in the line’s 17-ship fleet, fitting comfortably in the “Breakaway Plus” category, a distinction previously held only by Norwegian Breakaway and Norwegian Escape. While the “plus” could refer to the ships’ larger size (10 percent larger than those of Breakaway class), the real “plus” for many guests is an additional deck devoted to groundbreaking features never-before-seen at sea. 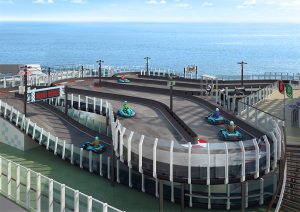 Aboard Bliss, that means either the racetrack, a two-level thrill ride where adventure seekers don protective headgear and board electric go-carts to speed around the largest competitive track at sea, or the space-themed laser tag experience, an interactive battle that finds laser gun–toting guests seeking out enemies against a spooky open-air backdrop that looks as if it was lifted straight from a Star Wars comic book.

Laser tag and the racetrack may be scoring all the inaugural headlines (along with Ocean Loop, the transparent free-fall pool slide that juts out beyond the side of the ship) but Bliss is so much more. A delightful mixture of the most loved Norwegian Cruise Line signatures together with new and innovative surprises, Norwegian Bliss somehow has managed to create an experience that will appeal to travelers of all ages, all tastes, and all budgets.

The Haven, Norwegian’s tony and oh-so-private top tier accommodation is perfect for families and those looking for the variety offered on a large ship while enjoying the privacy you’d find on a smaller one. With 95 Haven suites aboard Bliss, Norwegian has nearly doubled the number that exist aboard Breakaway-class ships. 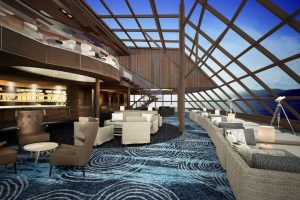 Along with your Haven suite comes an abundance of perks: a restaurant exclusive to Haven guests, a private swimming pool with wood-paneled sun deck and cabanas, a spa and the elegant Horizon Lounge, and a two-floor bar and observation lounge with sweeping views. Options in The Haven category include a two-bedroom family villa with Balcony, Spa Suite, Owner’s Suite, and Penthouse.

On the opposite side of the spectrum there is The Studio, designed and priced specifically for single travelers (which means no pesky single supplement). Norwegian Cruise Line launched its groundbreaking Studios in 2010 aboard Norwegian Epic. Eighty-two of them are offered on Norwegian Bliss, and they include use of the Studio Complex and Lounge which allows solo cruises an opportunity to meet and mingle.

The remainder of Norwegian Bliss’ 2,043 staterooms (47 of which are suitable for guests with disabilities) include Spa Mini-Suites and Spa Balcony cabins with complimentary use of the ship’s thermal spa, hydrotherapy pools, steam room and heated loungers; mini suites; balcony; ocean view; and inside cabins. Virtually something for everyone!

Long-time Norwegian Cruise Line devotees will be happy to learn that they can continue to experience the culinary theater of Teppanyaki, the rustic Tuscan fare of La Cucina, the elegance of the French Le Bistro, and the steakhouse delights of Cagney’s. But save room for some exciting new additions to these signature eateries, some that recently debuted on other Norwegian ships and others that premiere aboard Bliss. 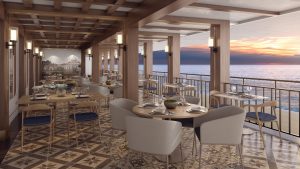 On dry Alaska summer evenings and certainly during Caribbean sailings, head to The Waterfront, a quarter-mile-long outdoor promenade dotted with restaurants and pubs. It is along this lovely seaside strip on Deck 8 that you’ll find alfresco dining at Ocean Blue, a refined and elegant seafood spot that first hit the waves aboard Breakaway, and Los Lobos, an upscale cantina that debuted aboard Norwegian Dawn in 2016 and serves up traditional Mexican favorites along with handcrafted margaritas and guacamole prepared tableside. Alfresco dining areas are also offered at La Cucina and Cagney’s. All Waterfront eateries also offer indoor seating for those evenings when there’s a chill in the air or misty rain.

Food Republic, with an a la carte menu, is an Asian fusion eatery that blends flavors and cooking traditions of Asian and South American cuisine and debuted to great fanfare aboard Norwegian Escape this year. Now aboard Bliss, this family- friendly a la carte restaurant (where ordering is done via iPad) is tucked away on Deck 8 and offers a delightful assortment of small dishes to full platters, all meant to be shared.

New to Norwegian Cruise Line is the a la carte Q, a barbecue joint at sea! Q serves up generous portions of brisket, ribs, chicken and sausages smoked (using an electric barbecue) over hickory, oak, and pecan woods for authentic down home Southern flavor. Sides, sauces, beers, and cocktails complement the hearty fare while a live country music band elevates the roadhouse feel.

Jimmy Buffett’s a la carte Margaritaville, the complimentary pub-like Local, a trio of main dining rooms (Taste, Savor, and Manhattan), the Garden Café Buffet (don’t miss their seafood buffet), Coco’s and Dolce Gelato (both a la carte) guarantee that guests aboard Bliss will never go hungry. And if it’s superb coffee you crave, head — as you do ashore — to Starbucks, the first full-service one in the Norwegian fleet.

Best of all, Bliss features the Freestyle concept that is so popular with Norwegian guests — no dress codes or assigned dining times or tables, ever! 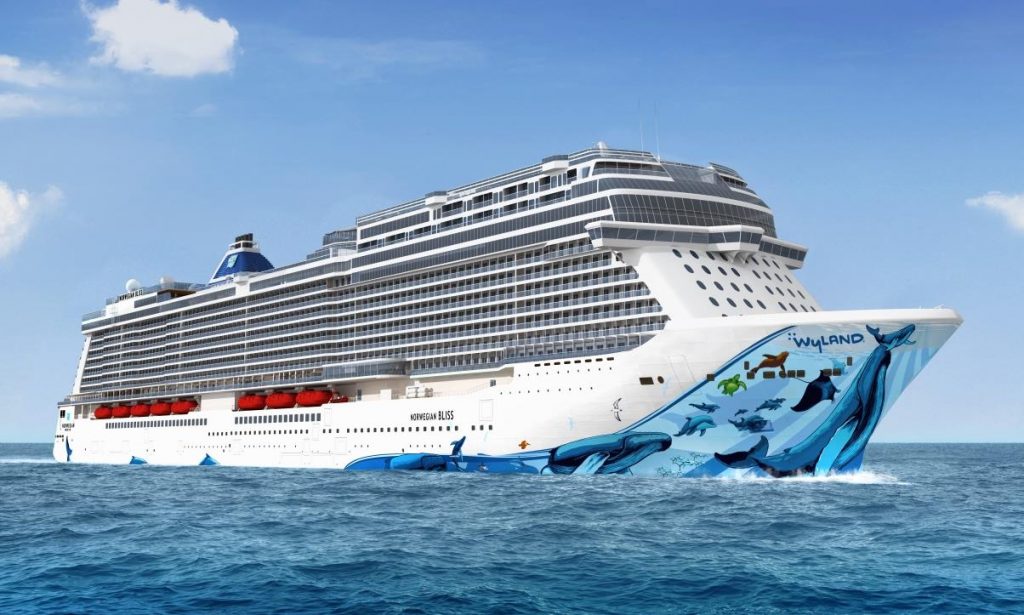 Norwegian Cruise Line casinos have been voted “Best at Sea” by Casino Player Magazine for the past 15 years as well as “Best Casinos” by Porthole readers for the past 7 years. The vast and pulse-pounding casino on Bliss complements many atmospheric bars and lounges for endless evenings of cocktails and conversation; don’t miss Sugarcane Mojito Bar, The Mondavi family’s Cellars Wine Bar, and Maltings Whiskey Bar. Still, even those who typically shun cruise ship entertainment should prepare to be dazzled.

The big draw is Jersey Boys, a slightly abbreviated version of the show that took Broadway by storm. This is the story of the legendary Frankie Valli and The Four Seasons and their rise to fame from the streets of New Jersey to the hit parade with songs like “Sherry,” “Walk Like a Man,” and “Big Girls Don’t Cry.” Superb!

Like a tipple with your entertainment? Check out Happy Hour Prohibition — The Musical. A lighthearted tale of bootleggers, toe-tappin’ tunes, and specialty cocktails prohibition-style, this is a most enjoyable way to spend your pre-dinner hour.

If the Beatles and classic British rock is your thing, plan to spend your evenings at The Cavern, a seagoing outpost of the Liverpool club that first gave rise to The Fab Four. Against a backdrop of weathered brick and vintage posters, a Beatles tribute band — dead ringers for John, Paul, George, and Ringo — catapults us back in time with early Beatles hits one night and Sgt. Pepper tunes the next.

Reservations for all theater shows are highly encouraged, but reservation kiosks scattered throughout Norwegian Bliss make it easy to score the hottest tickets (and the kiosks can also be used for dining reservations, spa appointments, racetrack and laser tag slots, and more).

Norwegian Bliss will be sailing to some of the most beautiful places on earth, but with her extraordinary ambience, universal appeal, and exciting and innovative features, it doesn’t really matter where you go … or what the weather will be like when you get there.