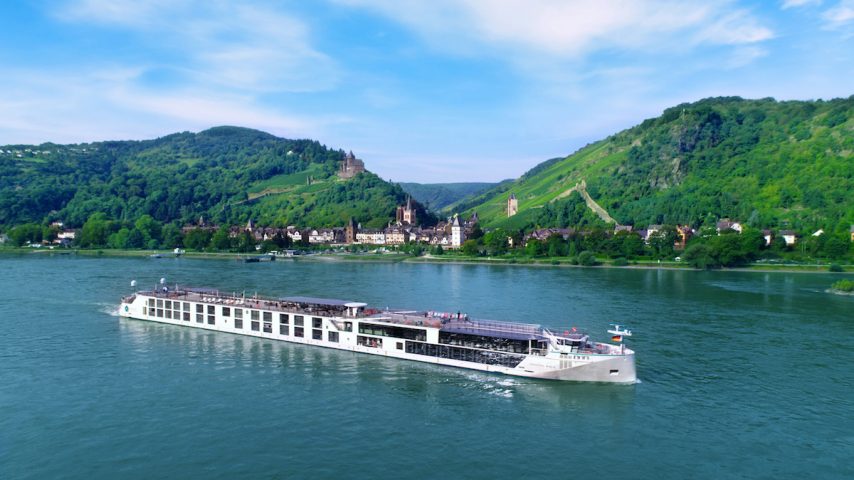 Gray skies hang over Germany’s Black Forest and there’s a hint of rain in the air, but I’ve stepped off the gangway of Crystal Bach into a world of shimmering light.

Crystal Bach Rooms with a View

Riverboats on Europe’s waterways are essentially limited in size by the many locks and bridges. It’s how you use the space you have that makes the difference — and Crystal Bach certainly defies convention.

For starters, there’s a wonderful sense of space, which is no surprise given that the ship holds just 106 guests, while other lines accommodate up to 190 onto ships of identical dimensions. There are no second-rate cabins; the lowest deck, typically featuring the most inexpensive accommodation, only has crew cabins, the small gym, spa, and laundry. Every stateroom upstairs on Crystal and Seahorse decks has a panoramic window that slides down to create an indoor balcony effect. 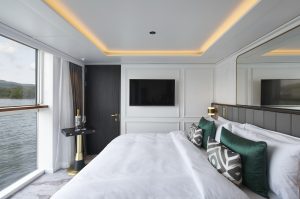 There are only three categories: 15 Petite Suites, 35 River Suite Deluxe, and two lavish Crystal Suites complete with fireplaces that flicker with faux flames. My 253-square-foot Deluxe Suite was gorgeous, with heavy silver drapes and a whole wall of glass. The color scheme boasts soothing creams and grays with an emerald-green velvet armchair and a black glass-topped vanity. A button on the phone summoned the butler, while the white marble bathroom was stocked with Etro goodies from Italy and big, fluffy towels and robes.

There are other differences, too. In a cutting-edge design, the Palm Court (the main lounge) has a glass ceiling on each side, so light floods in from above. By day, the Palm Court serves as the ship’s elegant, serene, and sunny living room. At night, it transforms into a chic cocktail lounge with tiny crystals sparkling above the dance floor and a Steinway piano bathed in pink light. Cocktail hour was my favorite time of day, with Perry, who has a cult following on Crystal’s ocean ships, at the piano, a hubbub of chatter and the gentle rattle of the cocktail shaker. All-inclusive drinks certainly add to the relaxed vibe.

There’s no cruise director on board, only hotel and excursion managers, so when it comes to entertainment, besides Perry’s wonderful piano tunes, on one evening, guests were treated to an excellent opera recital with singers flown in from Milan. Late at night, the dance floor was always packed.

A Feast for the Senses 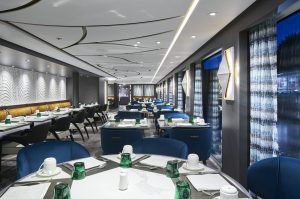 Food is every bit as delicious as it is on Crystal’s oceangoing ships. Breakfast and lunch in the Waterside dining room are buffet style, with dishes such as breakfast omelets and lunchtime pasta made to order. And there’s no shortage of local specialties including apple strudel, fresh berries, and Swiss and German cheeses.

In the evenings, The Waterside features open seating, so you can arrive when you like. Many European passengers, who eat late, love this. Menus feature high-class, farm-to-table cuisine, with a nightly local special such as veal tenderloin with rösti potatoes and a creamy wild mushroom sauce. There’s always-available comfort food for more conservative palates as well as a separate vegetarian menu.

For casual fare, Bistro Bach, aft of the Palm Court, provides all-day snacking from smoked salmon bagels and specialty coffees at the late-risers’ breakfast to dainty cakes and mini-quiches at lunch. In the evenings, you’ll find family-style platters including roasted jumbo shrimp and pulled pork sliders.

The Vintage Room, seating 10 and bookable several days per cruise, is a decadent affair where it’s all about the wine. Dinner, at €270 ($330 at press time), is an eight-course tasting menu with paired wines, but I opted for the more modest lunch at €80 ($98 at press time), which kicked off in style with a 2006 Dom Pérignon followed by a stunning Austrian Riesling and a 2012 Premier Grand Cru from Saint-Émilion. A honey-like Austrian dessert wine accompanied a trio of heavenly chocolate and strawberry confections.

A relative newcomer to river cruising, Crystal is continually tweaking its newest ships. By summer, the sleek speedboat that’s parked behind the glass-roofed swimming pool on Crystal Deck will be stashed on shore instead (along with the boats belonging to her three sister ships), bookable for private, Champagne-fueled jaunts in ports such as Vienna and Basel. The space vacated by the boat will become a terrace, and a fleet of bicycles is being added for the 2018 season.

With two award-winning oceangoing ships (Crystal Serenity and Crystal Symphony) as well as a sleek yacht (Crystal Esprit), Crystal Cruises is already a big name in luxury travel. The line already has one river ship, Crystal Mozart, which sails the Danube, but Crystal Bach and its three sisters, Crystal Mahler, Crystal Ravel, and Crystal Debussy, are the line’s first newbuilds. By this summer, Crystal’s river ship fleet will be a significant player on the Rhine, Main, and Danube rivers.

A whole new range of excursions is being introduced, too, themed around food, the arts, activity, and local culture. Experiences will include kayaking through the canals of Strasbourg, going behind the scenes in Amsterdam with a tulip grower, or a guided tour of Budapest in an old Trabant car. Some are included, some cost extra, but either way, with no more than 15 per group, you’ll need to book early.

Many of the passengers on my cruise were on their first river adventure, having been persuaded by their experiences on Crystal’s ocean fleet to give it a try. Overall, there’s a sense of being in a very chic boutique hotel rather than the more structured environment of traditional river cruising. Judging by the happy, house party atmosphere that developed by the end of the cruise, as well as the talk of future trips, Crystal has certainly brought real sparkle to Europe’s rivers.