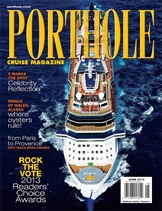 Having four stunning and super cool sisters doesn’t make it easy for the fifth sibling. How do you grab attention? Stand out in the crowd?

The gorgeous 3,030-passenger Celebrity Reflection should have no problem in this regard. Slightly larger than her siblings, this new 126,000-ton ship competes with added spa features, extravagant suites, and a museum-worthy collection of modern and contemporary art — not to mention the funkiest shower at sea.

Even on a two-night preview cruise from her winter homeport of Miami, it was clear she’s no copycat. Reflection will make waves.

Since launching Celebrity Solstice in 2008, Celebrity Cruises has added a ship a year — Celebrity Equinox (2009), Celebrity Eclipse (2010), and Celebrity Silhouette (2011). Reflection is the fifth and final ship in the class.

Under the iconic Celebrity Cruises “X” on their smokestacks, the sisters have gained considerable attention for the landmark feature of a “Lawn Club,” a half-acre of real grass up on top. But the contemporary high design displayed aboard these ships is another wow — especially the main dining room created by top restaurant designer Adam Tihany (Le Cirque in New York), complete with jaw-dropping two-deck-high glass wine tower.

Reflection‘s 310-square-foot AquaClass suites, like the spa lovers’ AquaClass staterooms, come with such perks as Frette bathrobes, Bugari bath products and Hansgrohe showers. But more importantly, AquaClass guests also get complimentary access tothe Persian Garden, the soothing thermal suite in the ship’s two-deck AquaSpa, and to the healthy alternative restaurant, Blu, where the tasty cuisine has a Mediterranean slant.
Reflection’s AquaClass Spa itself has been expanded with new features, including a steamy, Turkish-influenced hammam, an infrared sauna, and an aromatic steam room.

Another way that Reflection stands out from the pack is with her totally new private suite complex on Deck 14. Guests can only access this private area by keycard.

Here, the standout accommodation is the enormous Reflection Suite — a 1,636-square-foot, two-bedroom oasis, done up in contemporary decor. There are floor-to-ceiling glass doors and a veranda with whirlpool, but the Reflection Suite’s big feature is a shower. The polygonal structure is all glass (you can see out but others can’t see in) and actually juts off the side of the ship. Bathers’ views can include the sun setting on the horizon and the sea surging way down below the glass floor. The view is not for the faint of heart!

All the suites come with 24/7 butler service and such niceties as Reverie mattresses controlled by an iPad. The suites can be booked individually or the whole complex can be reserved for a private group of up to 26 people.

Like its closest sibling, Celebrity Silhouette, Reflection boasts one of the most creative restaurant offerings on the high seas. In the space that on the first three Solstice-class ships features the Hot Glass Show, Silhouette added an open-air grill where, if you choose, you can cook your own steak. The Lawn Club Grill (fee charged) has proven so popular, it’s been slightly expanded on Reflection, with additional seating.

The restaurant has a wall of electric grills where passengers who are game can play “grill master,” choosing prime cuts of meat, grabbing a pair of tongs, and joining the ship’s experienced chefs in preparing the meal. Guests can also make their own pizza, picking out an array of toppings.

The grill serves up views of the Lawn Club — a grassy stretch that never fails to impress. Eight private cabanas, done up in cushy furnishings, can be rented by those who want to linger in the park-like setting. Or, anyone can loll in one of the complimentary hammocks.

In the evening, head back to the ship’s best “hidden” hangout spot, the aft-facing Sunset Bar. Expanded on Reflection and decorated with South Beach, the bar boasts stools that even change color as the sun goes down. With a guitarist singing classic rock tunes, it’s the perfect spot to watch the sunset.

From the soaring atrium to the adults-only, indoor solarium pool with its plush loungers (some for two), thoughtful contemporary design rules Reflection’s interiors.

Even one of the ship’s oddest spots, an avant garde tree house called The Hideaway, is designed with purpose. In this case, the pods off the atrium serve as a quiet place to read a book or use your iPad. Smartly, there’s also a free coffee station nearby. The ship’s internet lounge is a chic affair, designed to show off Apple products; Celebrity is an Authorized Apple Reseller and in the iLounge, guests can buy products and also consult certified staff on how to use the iPads, iPods, and iPhones.
The ship’s main dining room, Opus, is a classy, white affair, and Reflection‘s fee-based alternative dining spots stand out both with cuisine and decor — the most outstanding is the theatrical Qsine, with an iPad menu featuring such offerings as sushi lollipops.

Cushy bars and lounges include the ice-topped Martini Bar and the Molecular Bar, where some of the creative cocktails come with fake smoke. Wine is fine — the fleet now has 300 sommeliers — as is beer, which comes in 50-some craft varieties at the intimate Michael’s Club.

Guests on Reflection would be wise to stop and take a long look the flowers. The ship’s collection of noteworthy art includes a Jeff Koons Mirror Flower in an aft stairwell.

Working with a $5 million budget, consultants at International Corporate Art (ICArt) in Miami acquired 136 new works for Reflection. “The Seductiveness of a Reflection” collection already featured 115 standout works that had been on ships no longer in the Celebrity fleet, and also added eight new site-specific installations. In addition to Koons, other renowned artists on display include Robert Rauschenberg, John Baldessari, Kiki Smith, and John McCracken.

Celebrity commissioned an artist to create an installation for the Upper Grand Foyer of each of the Solstice-class ships, to serve as a vessel for a live tree that gets sunlight through a skylight. On Reflection, the dramatic metal branches holding the live tree are the work of conceptual artist Bert Rodriguez.

The cruise line has been collecting art since the 1990s, and with the fleet-wide collection now valued at about $60 million, it recently created a Celebrity Art Collection catalog, found in staterooms on Reflection. Guests who want to get in touch with their own artistic side can take classes in The Art Studio, where Master Artists from the ArtCenter South Florida teach sketching, painting, and jewelry making.

Reflection debuts an all-new, multifunctional conference center. Located on Deck 4, the center comes with catering options, so it can also serve as a venue for weddings and award banquets.

Elsewhere, Reflection introduces a high-tech take on the traditional shipboard card room. Game On has six 32-inch interactive touchscreens for playing such games as checkers, except in this case with digital frog game pieces.