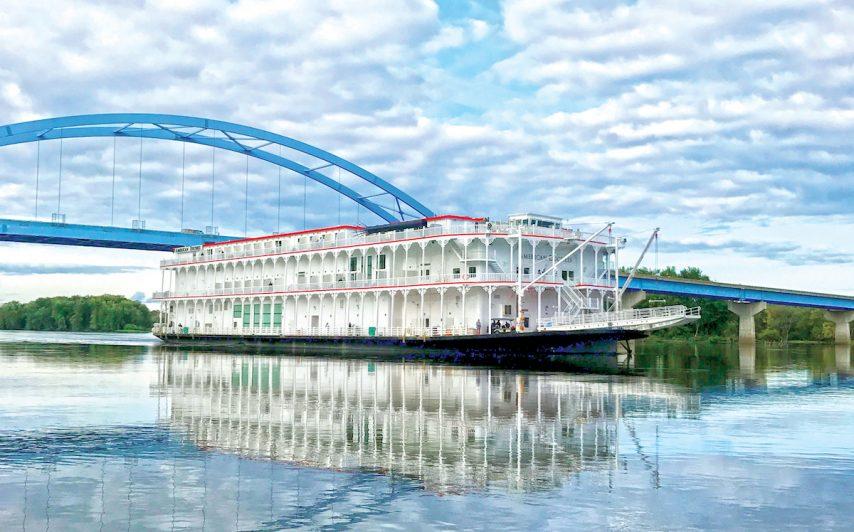 Cruising the Mississippi River on its first all-suite paddlewheeler.

On August 14, 2017, in New Orleans, American Queen Steamboat Company christened its newest ship, American Duchess. Godmother Marissa Applegate, daughter of the line’s chairman and CEO, John Waggoner, broke a bottle of Maker’s Mark bourbon on the boat’s hull culminating the ceremonial festivities before the 166-guest ship embarked on her maiden voyage from New Orleans to Red Wing (Minneapolis). American Duchess is the third ship in the company’s collection and the first all-suite paddlewheeler to ply a U.S. river.

“The original plan was for a boat on the Great Lakes, but American Queen and American Empress were doing so well that we had to turn people away,” Waggoner said. “So, we built American Duchess from a former casino boat to deliver it on time.”

The ship’s original 1995-built hull had two, 18½-foot decks with no interstitial columns, presenting an open palette, which Waggoner and his staff could transform into anything they wished. So they completely overhauled the ship to meet the needs of discerning, luxury-minded travelers.

Throughout the ship, contemporary furniture in muted, soothing hues is offset by colorful artwork by Michael Blaser, known for painting river ports, riverboats, deep-water ports, and ocean-going vessels. Spaces are warm, characteristic, and inviting, always reminding you that you’re on the river.

The Lincoln Library, for example, is situated on an open mezzanine level and flanked by windows on either side overlooking the 166-seat Grand Dining Room. Sit and unwind on comfortable seating arrangements, listen to live piano music, and sip libations at the bar.

“We figured this will be a great place for groups if they want to separate and have their own space,” said the line’s president and COO, Ted Sykes. “There will also be late-night entertainment here.”

From here, two staircases wind their way down on either side of the dining room to the soaring Grand Lobby & Bar with its 36-foot-high ceiling. After enjoying pre-dinner drinks, dine on an array of upscale cuisine in a single seating, or as many as 80 guests can opt to dine, either indoors or outside, at The River Club and Terrace (reservations required for dinner), with its open kitchen and double-sided bar. You’ll enjoy regionally inspired, epicurean cuisine from fine, local ingredients, as well as complimentary wine and beer with dinner.

In the evening, head to a sizable Show Lounge, which features nightly entertainment by three on-ship performers (their renditions of local river-themed songs are top notch) or local guest talent. A resident riverlorian and local historians also give frequent talks on the river and the unfolding landscape.

Also on second deck, a small but well-equipped fitness center with free weights, a workout bench, two treadmills, an elliptical machine, and a stationary bike, is a space where you can exercise while looking out on the river. The adjacent Perks serves coffee, tea, self-serve ice cream, and freshly baked cookies 24 hours a day.

Eighty-three guest suites in five categories are situated on Decks 2 and 3, and range in size from 180-square-foot interior suites to 550-square-foot Loft and Owner’s Suites. Unique to American Duchess, the spacious Loft Suites feature a lower level with a full bathroom, small dining area, a lounge section with a queen-sized sofa bed and desk area, and sliding doors to a private balcony. The upstairs loft area is a tranquil retreat with a semi-private bedroom, a full bathroom, and generous closet space. Owners, Loft, Deluxe, and Veranda Suites all have balconies, and all accommodations feature a mini refrigerator, Keurig coffee maker, iron and ironing board, and a hairdryer.

Deck 4 contains the pilot house and a sun deck where you can spread out and soak up the passing scenery. With such upscale trappings, traveling the river on this luxurious paddlewheeler is a wonderful way to experience the mighty Mississippi, America’s greatest waterway.

Cities of the South

American Duchess sails a variety of 5- to 23-day voyages on the Upper and Lower Mississippi, Ohio, and Tennessee rivers. Included shore excursions in every port of call are great for exploring the many classic cities along the rivers, such as St. Louis, Nashville, Baton Rouge, and Natchez.

The popular 9-day Antebellum South, Memphis-to-New Orleans voyage provides a chance to truly experience the river in either direction, sailing between two of the region’s most significant ports. New Orleans celebrates its tricentennial in 2018, and Memphis its bicentennial in 2019, so there is no better time to uncover the rich history and cultural heritage in these southern cities.

While in New Orleans, book a tour of one of the cemeteries, dubbed “Cities of the Dead.” The St. Louis Cemetery #1 is by far the most visited and you can only see it on a tour, where you’ll learn about the city’s most famous inhabitants, including New Orleans’ Queen of Voodoo, Marie Catherine Laveau, and the greatest chess master of his time, Paul Charles Morphy.

Celebrate the city’s famed cuisine at the New Orleans School of Cooking — whether with a larger group watching and then sampling food prepared during a chef-led demonstration, or with nine other participants in a chef-instructed cooking class. You’ll learn about the local creole and Cajun cuisine and, of course, will leave well fed.

If it’s the joie de vivre you’re after, you don’t have to wait for Mardi Gras itself. Pay a visit to Mardi Gras World, the home of Kern Studios, where sculptors and painters work year-round on floats that krewes use in Mardi Gras parades. Tour the warehouses and watch the artists at work, and marvel at colorful floats from past parades.

At the other side of the itinerary, Memphis has plenty to offer visitors, especially music buffs. Tour Sun Studio, the “birthplace of rock ’n’ roll” to see where Elvis Presley, Roy Orbison, Jerry Lee Lewis, Carl Perkins, and Johnny Cash recorded hits in the 1950s. At the Stax Museum of American Soul Music, learn about the musicians who cut records with Stax and view an extensive collection of memorabilia, including the complete replica of the converted movie theater where music was made. Of course, a trip to Graceland is a must for any Elvis fan. Aside from the mansion, there’s Elvis Presley’s Memphis — an entertainment and exhibit complex complete with restaurants, gift shops, and even two of his airplanes.

The National Civil Rights Museum is also well worth a visit, especially since 2018 marks the 50th anniversary of the death of Martin Luther King Jr. Split between the Lorraine Motel, where King was assassinated, and the Legacy Building, a former boarding house where the assassin’s shot was allegedly fired, the museum houses more than 260 artifacts, numerous films, and hands-on exhibits, telling the story of slavery and the American Civil Rights Movement.

There are enough sights and attractions to explore in each city to warrant extending your stay on both sides of your cruise, making your vacation in the South even more memorable.