SeaDream Webinars Let Us Know What They Know! 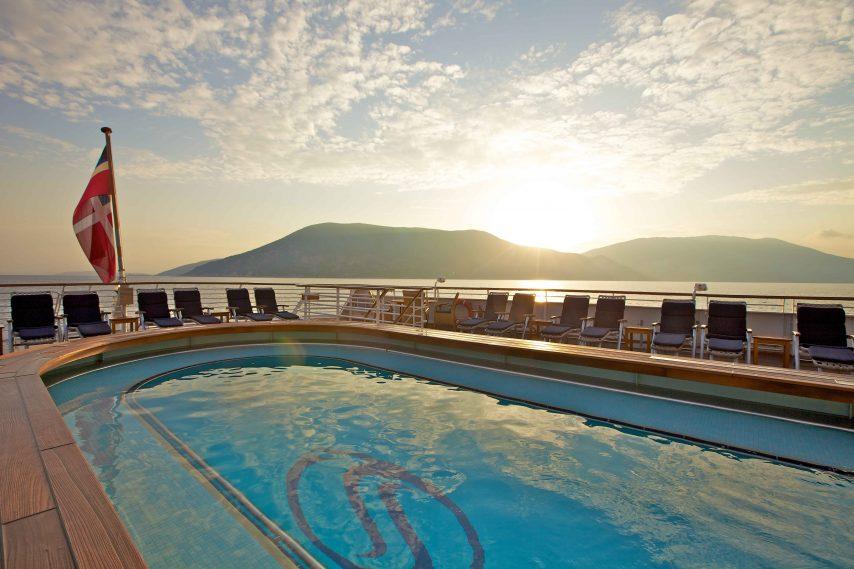 Throughout my entire corporate career, nothing was more important to me than providing answers or, when definitive answers were elusive, regular updates that informed and enlightened my clients or colleagues.

How refreshing to see that SeaDream Yacht Club adheres to these same business principles in order to keep us abreast of what’s shakin’ aboard our beloved SeaDream I and SeaDream II during the pandemic.  Best of all, they’re doing so via webinars conducted by the line’s greatest movers and shakers– Andreas Brynestad (Executive Vice President), Bob Lepisto (President), Sudesh Kishore (Senior Vice President/Hotel Operations) and Emilio Freeman (Vice President/Destinations)–who also make themselves available for questions during and after webinars.   Not only do the big guys guarantee that the information we hear is the same as that being bandied about in the SDYC conference room but it’s the only time you’ll see, as we did during the first two SeaDream webinars, individuals’ questions about bookings or refunds addressed—bam!–on the spot, with the line’s Executive Vice President picking up the phone right there in view of all of us.

During SeaDream’s September 3rd presentation, we learned about the SeaDream Norway sailings that have been underway since June, the safety procedures that have kept SeaDream I and SeaDream II afloat and COVID-free from the get-go and the newly-announced Ultimate Booking Assurance Program which grants a full cash refund or 120% future voyage credit for all new cruise bookings departing July 22, 2020, until June 30th, 2021.

Today, SeaDream followed up that initial session with additional news, additional safety protocols and a surprising change to its Caribbean season.

At this point, only SeaDream I will cross the Atlantic and she’ll do so in fabulous fashion with a 21-night crossing on October 15th from Oslo to Barbados, calling at Skagen, Southampton, Funchal, Kingstown, and Mayreau, where the line’s signature Champagne & Caviar Splash will be held.

The yacht’s Caribbean season will then kick off on November 7th with seven-day voyages (along with a handful of 8-day and one 6-day one) that will operate through April 3rd.  The 7-nighters will sail from Barbados to Kingstown, Bequia, Canouan Island (where the billionaires go to avoid those pesky millionaires), Mayreau, Tobago Cays, Union Island and St. Georges before returning to Barbados.

Based on comments and questions posed by past guests and travel professionals during the call, the change in SeaDream’s Caribbean itinerary and the cancellation of SeaDream II sailings is receiving mixed reviews from even the most passionately-devoted SeaDreamers, most of which are disappointed that they won’t be sailing from St. Thomas aboard SeaDream.  According to SeaDream management, the itinerary change is a smart one triggered by restrictions posed by the pandemic and the fact that the Barbados government has demonstrated a willingness to closely collaborate with the line to create a travel experience that is up to SeaDream’s very high standards.  And if the new itineraries prove popular, SeaDream II just might follow SeaDream I across the Atlantic to satisfy demand.

Even with Barbados’ cooperation, however, it was revealed that it is unlikely that guests will be permitted to explore ports independently and will instead be limited to organized land adventures to pre-designated locations in both Barbados and St. Vincent & the Grenadines.—though with those pre-designated locations including spectacular beaches with abundant snorkeling, what’s there to complain about?

“The situation is fluid, and it’s a constantly-changing environment” emphasized…well….every SeaDream executive on the call, stressing that all is contingent upon the COVID situation and resulting restrictions but dropping a tantalizing suggestion that “big changes” from the CDC just might be in the wind this November which could loosen things up significantly.

Right now, guests planning to sail aboard SeaDream I from Barbados will require documentation of a negative COVID-19 test taken not more than 72-hours prior to arrival or risk being forced to return home.  Quarantine restrictions for US residents arriving in Barbados mean that guests should arrive the day of sailing and not plan on a pre-cruise stay (though a post-cruise stay would be acceptable).  Expect to be tested for COVID again upon arrival, perhaps at the Barbados airport during your screening but certainly by SeaDream’s doctor prior to boarding the yacht, a test that will be administered via the Abbott ID Now machine which provides results in 15 minutes.

While SeaDream I will encourage social distancing, masks will not be mandatory for guests though a supply will be available for any guest who chooses to wear one and the policy will be reviewed regularly not only with medical consultants but guests themselves. How, during the pandemic, can SeaDream be a mask-less refuge? Because the following are just a few of the safety protocols that SeaDream I will employ in addition to its pier side testing of guests and crew:

-Embarkation will be staggered with time slots between noon and 6:00 p.m. to avoid crowding.

-All luggage will be sanitized.

-Thermal scanners will monitor temperature prior to boarding and when re-embarking after shoreside visits.

-Staterooms will be pre-sanitized using Altapure AP-4, an ultrasonic fogger that is used for high-level disinfection in hospitals and operating rooms.

-Casino chips and cards will be sanitized at the casino.

-Hand sanitizer dispensers will be placed throughout the yacht

-No hugging or handshakes!

Two additional safety measures are being finalized and are expected to be announced shortly. Did you get a chance to see the webinar? Let us know your thoughts in the comments below!