Porthole Cruise was one of the first to meet Scarlet Lady, Virgin Voyages’ inaugural ship and a gorgeous sign of revolutions to come. 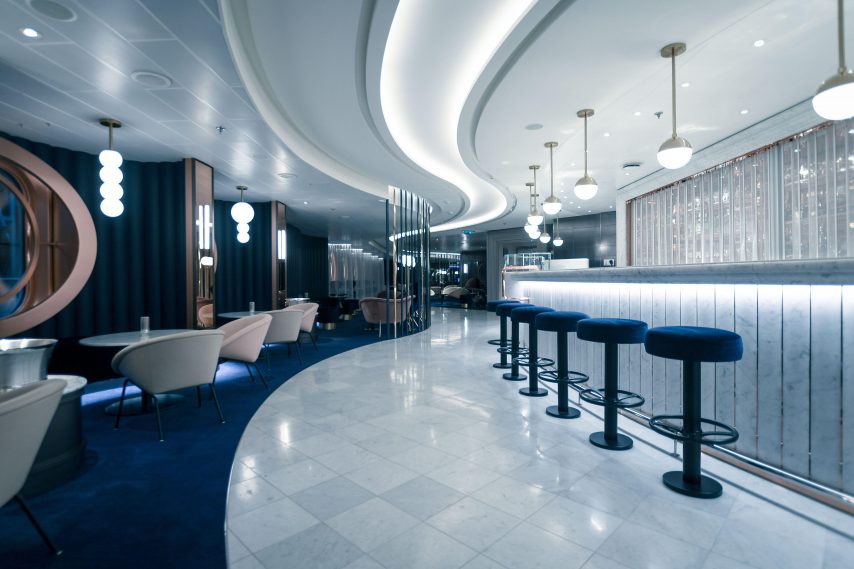 For months, Virgin Voyages had been flooding social media channels with carrot-dangling teasers about its mold-breaking Scarlet Lady, the first of four ships being launched by Sir Richard Branson’s fledgling cruise line. There’d be glamorous RockStar suites, a late-sleeper’s Drag Brunch, a Shake for Champagne app, and even DJ royalty spinning the decks at Bimini. (Editor’s note: Readers can see exactly which DJs in Porthole’s clubbing story this month. How’s that for a teaser?)

Scarlet Lady is billed as a disruptor. And while Virgin is not the first to take traditional cruising head-on — think Norwegian Cruise Line’s “Freestyle Cruising” that did away with fixed-dining formalities — the difference with Scarlet Lady is that this ship is Adult by Design, built specifically for grown-ups. And with it comes a whole new cruising lexicon. Restaurants are “eateries,” “bathrooms are “heads,” and, on a wet and wind-whipped day this past February, invited members of the media, bloggers, and influencers were the first “sailors” to overnight on Scarlet Lady. 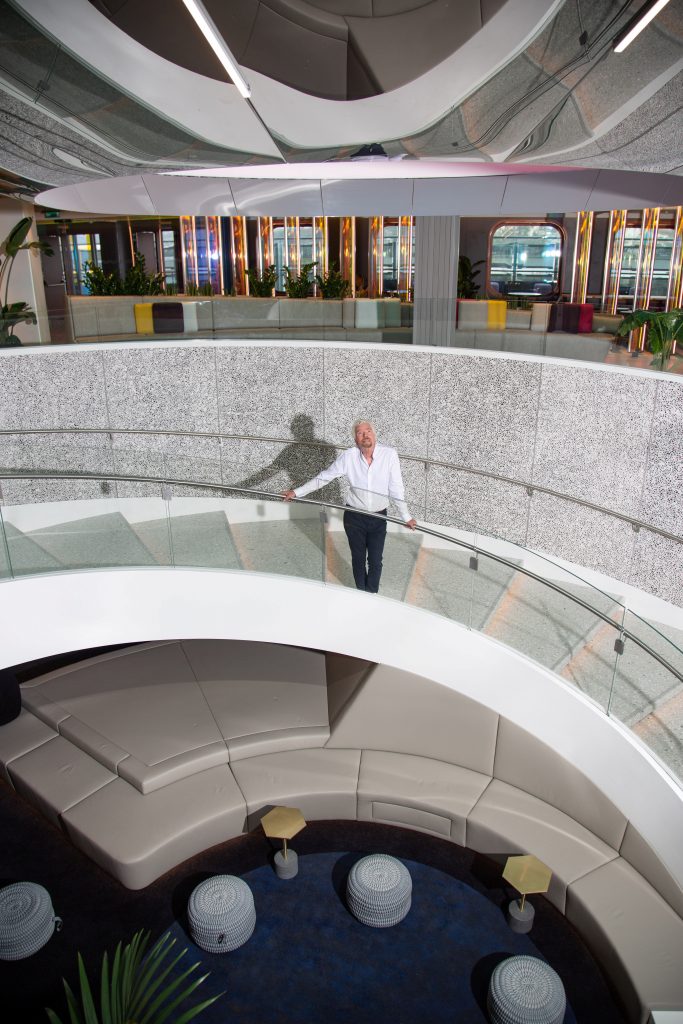 Approaching the Port of Dover by road, I caught a glimpse of Scarlet Lady, aft, and was struck by her stature. The upper nine of her 17 decks are steeply stacked, almost as if a circular car park had been plonked on the main deck. Were Scarlet Lady able to ask, “Does my bum look big in this?” the answer would be a resounding yes. In Dover, her whale-gray exterior — splashed with signature Virgin red — merged with February’s pregnant clouds. It will be interesting to see how that masculine bulk transfers to the blue horizons and cerulean seas of the Caribbean.

Once on board, we were ushered to The Manor, a double-height nightclub-cum-bar venue named after Branson’s first recording studio, where CEO Tom McAlpin greeted the audience with a hearty “Ahoy!” before apologizing to sailors who had been delayed in the chilly check-in hall. Branson eventually joined the executive panel. “Waking up, I thought: Oh my God, I am in a RockStar Suite on Scarlet Lady,” he says. “It must be a dream!”

Branson has not built an empire by playing by the rules. He talked about how the team started with a large blank sheet of paper and wrote down all the things other cruise lines did that Virgin Voyages didn’t like. He spoke of the “absolutely delightful” crew — 1,160 members strong, with a mix of 60 nationalities. “We want this to be the best gig they ever had,” says McAlpin.

There was mention of Climeon, with whom Virgin Voyages is partnering to offset emissions. “We are the first ship to be sailing carbon neutral from day one,” says McAlpin. Branson told the audience he had waited decades to fulfill his ambition to launch a cruise line, and even acknowledged the boarding delay, adding, “It’s much more fun to be an optimist — you’ve got to make your own optimism.”

Back in the early 1990s, Virgin Clubhouses flipped the traditional approach to airport lounging on its head, replacing stuffy formality with glamour and fun. By the time passengers were buckling up for take-off, the vacation had already begun. Sure enough, this break-all-rules approach shines through every aspect of Scarlet Lady as well.

There are 1,408 cabins on board, but I first set about exploring the eight categories of RockStar Suites. All 78 of these suites have a record player with accompanying vinyl and an in-room bar. Fifteen of these top-tier suites are Mega RockStar Suites, with each providing guests with a private bar; pimped-up outdoor space with alfresco showers; access to a hair and makeup team; the services of a dedicated agent; jump-the-line privileges at eateries; access to Richard’s Rooftop, a Soho House–style deck lounge; and VIP access to the private beach club at Bimini.

As the penthouse equivalent, the 2,147-square-foot Massive Suite affords the most inclusions and channels the brand’s musical heritage. When not shredding in the suite’s music room, where a rack of four guitars hangs on the wall, rockers can take the party outside to a hot tub on the expansive 1,317-square-feet terrace.

Approaching cruise-ship design with fresh eyes has altered more than just the vocab. For instance, the sightlines that so obsess onboard theatergoers are irrelevant in Scarlet Lady’s pillar-free Red Room. Duel Reality — an intense, mesmerizing, and fast-paced Romeo and Juliet narrative with an acrobatics twist — played out in the middle of two sides of tiered seating. Later, once cleared of seating, the Red Room re-opened for a club night called “Untitled dancepartyshowthing,” an immersive dance party that featured inflatable animals, digital imagery, and flash-mob style vocals. I didn’t hang around, but plenty of others did.

New to cruising is the adaptable Seabed, which has eight configurations (including bunk beds) across various cabin categories, including Solo and Social Insider. The latter is a good budget option for groups of four, not just designed for accommodating different vacationing groups, but about having a lounging space during the day. Somewhere to do sit-ups, perfect downward dog, or perhaps play Twister.

Seabed or no Seabed, I can’t image the rooms exerting much of a pull. There’s too much theater elsewhere, and plenty of lively places in which to hang out (or to see and be seen). A personal favorite was The Dock, whose French-Riviera-meets-Zanzibar decor invites lazy lunches and, come the evening, a glass of something cold to match the chilled acoustic vibe. “It’s the sort of place where you can go for a croissant at 11 a.m. and still be there at 7 p.m.,” says Senior VP of Design Dee Cooper as she led me out to a terrace. “We put it close to the water so that when Scarlet is sailing, the bar will come into its own.” 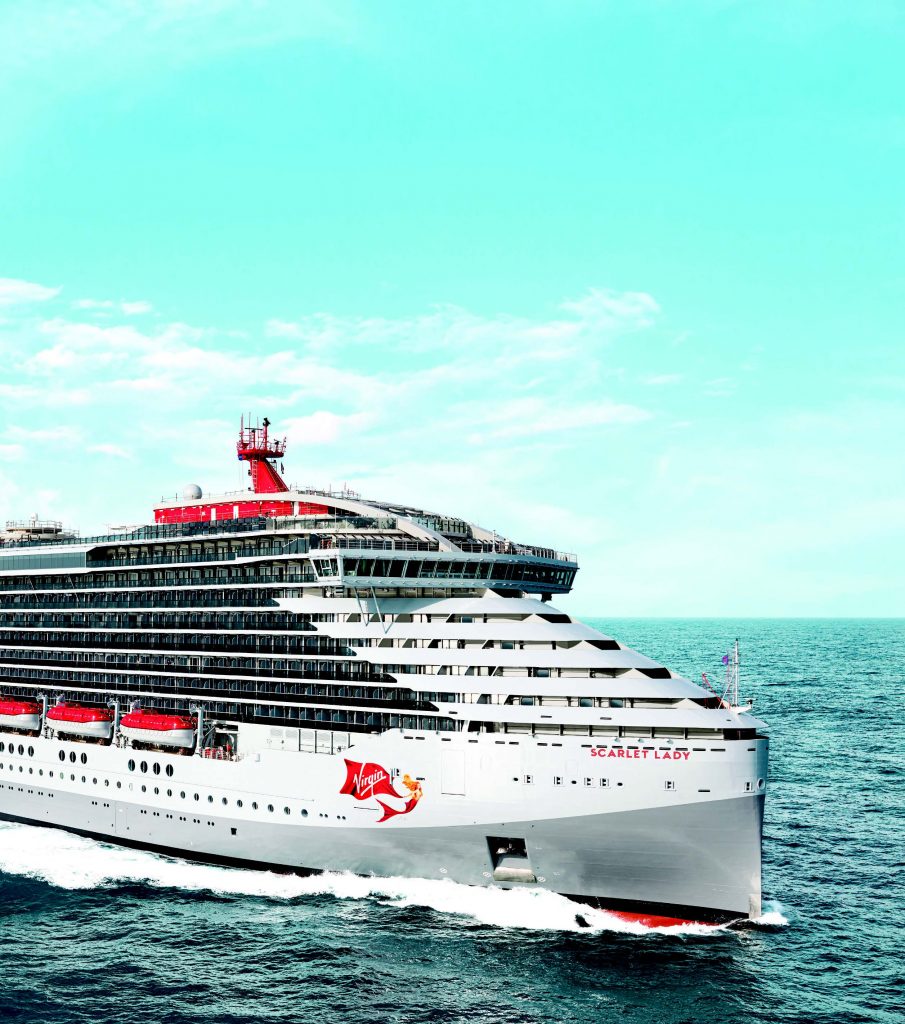 Designers conceptualized many nuanced public spaces, including a retail area with a record shop and a Squid Ink tattoo parlor; The Arcade, with its old-school video games; and The Groupie, a modern twist on the karaoke room. Several of these, restaurants included, channel a retro vibe into unique contemporary spaces. There’s an air of Gatsby in the champagne bar, Sip, and a whiff of Mad Men in The Wake, where I chose a 7-ounce filet mignon from the steak- and seafood-orientated menu. (At Razzle Dazzle the following morning, this serial bruncher enjoyed a creative twist on avocado toast, which was served with a fiery gochujang-pickled cucumber, watermelon radish, finger lime, and toasted seeds.) Even The Athletic Club has a social component that channels the vintage; additionally, swathes of space on decks 15 and 16 are given over to working out — five separate gym components run the gamut from aerial yoga to an outdoor boxing ring — and that’s excluding the elevated (Deck 17) Runway jogging track and an outdoor yoga and meditation space, The Perch.

While there is no shortage of fun-in-the-sun areas on Deck 16 (The Cabanas, Richard’s Rooftop, Sun Club bar, and an over-the-water catamaran net), the absence of a focal-point pool feels like a missed opportunity on a ship so focused on “the scene.” There are a couple of token pools on Deck 15 — one by the Aquatic Club bar and another in the well-being zone Gym & Tonic — but the most alluring pool on board is the warm, emerald green hydrotherapy pool within the stylish Redemption spa, which also has a fabulous thermal suite (access costs $75 port day; $125 sea day) and a comprehensive raft of treatments.

Scarlet Lady is not a ship for demure cruisers seeking a quiet time on board. Neither is it exclusive to a single demographic. If you’re a vacationer who works, you’ll enjoy the free Wi-Fi. If you want to indulge your inner teen with the bonus of legal drinking, you’ll enjoy that, too. If you vacation for the “scene” or live to work out, you’ll have a whale of a time. It’s about having a younger mindset.

“Whether you want to tox, detox, retox — we’re allowing you to do that in a stylish, sophisticated adult way,” says McAlpin. “We’re giving you the opportunity to feel young again.”

During one press conference, Branson said that he wanted to create a ship in which 30-year-olds “can have a blast.”

Approach it with optimism and you probably will.