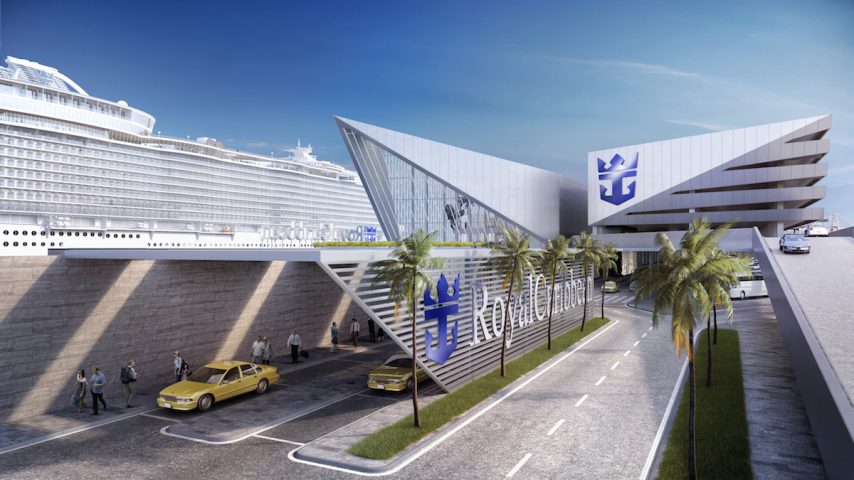 Royal Caribbean Cruises Ltd. has announced plans to construct and operate a dramatic new cruise terminal at PortMiami. The striking new structure will serve as homeport to Royal Caribbean International cruise ships, including one of the line’s 5,400-passenger Oasis-class ships (which include Oasis of the Seas, Allure of the Seas, the recently debuted Harmony of the Seas, and two more, yet-to-be named ships set for delivery in 2018 and 2021.

“We are truly excited to be working with Miami-Dade County and PortMiami to create not just another cruise terminal, but a truly iconic building,” said Richard D. Fain, chairman and CEO for Royal Caribbean Cruises Ltd. “This new terminal is a symbol of our commitment to Miami, the city where our company first started almost 50 years ago. We can’t wait to bring an Oasis-class ship to PortMiami.”

After a global competition between five of the world’s leading architectural firms, Broadway Malyan was selected to design the new terminal because of their creative thinking and cutting-edge design.

The 170,000-square-foot terminal, which is scheduled to open late 2018, is already nicknamed the “Crown of Miami” because of its distinct shape: The design evokes the points of the symbolic headgear when viewed from the water; the “M” of Miami when viewed from the eastern or western approaches; and a sense of waves rising or ships passing when viewed from the terminal side. At night, the terminal’s lit facade will make a striking impression and provide a dynamic addition to the port’s landscape.

“This public-private partnership will have an estimated economic impact of $500 million and generate approximately 4,000 jobs,” said Carlos Gimenez, Miami-Dade County mayor, adding that the expansion will make PortMiami Royal Caribbean’s largest cruise port in the world.