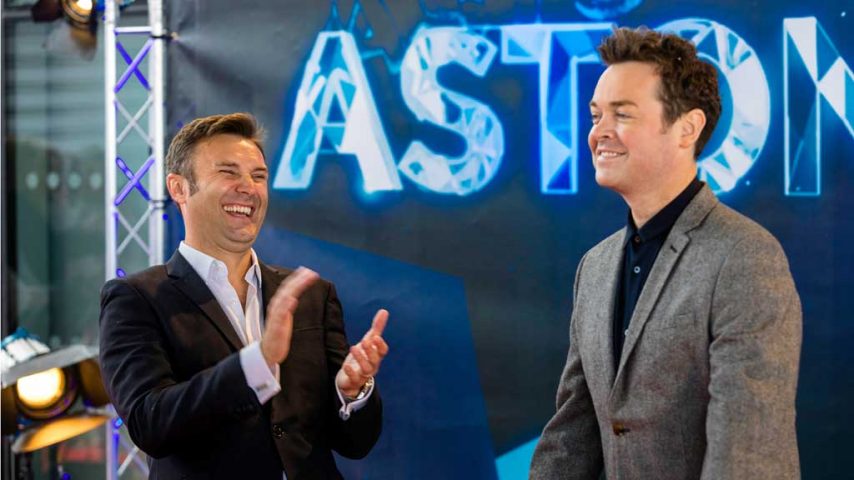 I was kindly invited to the Celebrity Premiere of Stephen Mulhern and Jonathan Wilkes’  Astonishing by the gracious and thoughtful PR team at P&O Cruises.

Staring down at the invitation that lay before me, I could hardly believe my eyes, after all I had only recently started up my new venture.  I was thrilled to say the least.  Little did I realize just how thrilled I was to be when the big day arrived. 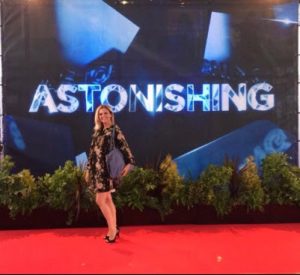 Britannia, P&O’s Flagship could be seen as we crossed Southampton’s Itchen Bridge, the excitement was beginning to build, it is common knowledge to my followers that I am a complete ship geek and cruise addict, therefore seeing Britannia from that distance had me dancing around in the car, like a child on Christmas morning (I was a passenger for those of you into H&S).  Pulling up to Dock Gate 4,  we were greeted with a stunning view which had me feeling proud to be British; Britannia in all its glory.  I had to gain my composure as we were asked to follow the red carpet. Giant Sparklers, bubbles and photographers flashing their lights had us feeling somewhat wowed.  It immediately became evident, the team at P&O cruises are true to their word, and for me this is a big deal!

I saw some familiar faces at check in; Media, press, fellow bloggers, oh and a few celebrities.  As always it was lovely to be welcomed on board by Maggie, who you can read more about here she set my mind at ease, I was nervous and she could tell, most definitely due to the fact that this was indeed my first invitation as an official blogger and my oh my, what a invite… 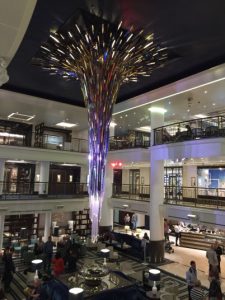 The Crystal Room on board P&O Britannia | Photo: Claire Harris

We were directed to the Crystal Room, a stunning bar with a live band playing.  This gave us the perfect opportunity to meet and greet with the other guests who had also been invited to the Premiere.  The wonderful and attentive staff on board Britannia were on hand, offering glasses of Champagne, Bucks fizz or freshly squeezed orange juice.  In addition to this, a wide range of canapes were also being enjoyed by guests. Feeling far more relaxed, I couldn’t resist the opportunity to capture some memories of the surrounding areas on board.  The buzz in the Crystal Room spread and infected us all with haste.  The show was due to start.

Making our way forward, we were offered either individual miniature bottles of champagne or a can of water, yes I did say a can of water.  I personally thought this was a lovely little gesture.  P&O cruises do not do things by half. Moreover a young gentleman passed each and every one of us a glistening gold envelope that we were asked not to open until instructed.  This gold envelope happened to be “astonishingly” important to the production. Taking our seats in the Headliners Theater, I felt, as I often do, wonderfully over whelmed by the sheer size and structure of the venue.  It was a groundhog moment for me whereby I had to pinch myself in order to serve as a reminder that I was in fact on board a magnificent cruise ship, not sat inside one of  London’s finest West End theaters. Excited babble was heard as the news spread swiftly that Declan Donnelly – one half of the notorious Newcastle due – Ant and Dec had taken to his seat along side his gorgeously glowing wife and next to TV presenter Ben Shepard. We just happened to be seated directly behind the family members of the mastermind genius’ Stephen and Jonathan.  The family were quick to gain Dec’s attention by hollering at him, much to his delight. This made for some good photos. They were a friendly and hilariously funny bunch, who we later caught up with back on the red carpet. 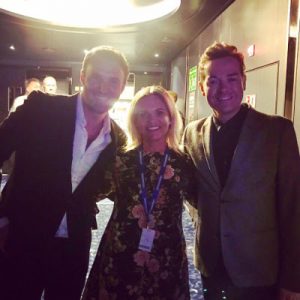 In my state of excitement I had to pop to the ladies last minute.  It just so happens I timed it to perfection, there before stood the authors of Astonishing, Stephen Mulhern and Jonathan Wilkes, both displaying how down to earth they are, this was refreshing to see.  I myself felt under pressure to prove myself  worthy of being at such an event as a new blogger, and also to all the other well established bloggers who were in attendance.  These two had to prove themselves to an entire audience full of their family, friends, media, TV crew and critics. At that surreal moment I was face on with two outstanding an accredited human beings whose body language spoke volumes.  No matter, both were chatty and stopped for a photo. In fact Jonathan and his family were happy to mingle and we caught up with a far more relaxed Jonathan after the show.

Naturally we were asked to refrain from filming the show and I have no desire to spoil it for any of you who may be cruising on board P&O’s  Britannia, Azura or Ventura in the future.  You’re probably aware, if you are familiar with my blogs that I am not always a conformer, therefore I can tell you that Astonishing has been publicised as a revolutionary magic and illusion show which has been produced exclusively for P&O Cruises by BAFTA winning  presenter, Stephen Mulhern and performer, co-founder of Soccer Aid and proprietor of Wilkes Academy of performing arts – Jonathan Wilkes. The cast were some of the most talented I have ever seen at sea, with dance creations from leading choreographer Paul Domaine and magic (because I absolutely swear that is exactly what I witnessed) from Guy Barrett.  As if all of this wasn’t enough, Stephen Mulhern had further captivated the audience  Can you remember those gold envelopes I told you about earlier?  This is where you become part of the show.  Nothing daunting, no going up on to the stage, you can stay in the comfort of your seat and be part of the revolution.   I can wholeheartedly say without hesitation that Astonishing is as it is promised to be, absolutely astonishing.  I have taken many a cruise and sailed the seas.  I have been blessed enough to witness some fantastic shows on board some phenomenal ships, of which for me is a highlight when booking my cruise holiday, as I’m sure it is for all other cruisers.  Above all,  Astonishing does stand out a cut above the rest in the illusions, magic and trickery stakes.  My mind is still completely and utterly blown and I have spent my day asking my self the same question, over and over…

If you are one of the fortuitous people who have already booked a cruise on board Britannia, Ventura or Azura or will be booking a cruise on one of these incredible P&O ships then you absolutely, unquestionably cannot miss Astonishing!

Warning: Once seen, can never be erased, you will be talking about Astonishing for a very long time. 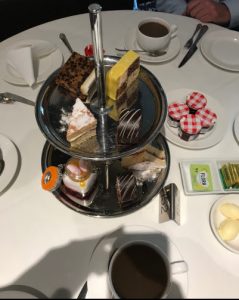 As if we hadn’t been spoiled enough already,  P&O cruises had generously put on a first class afternoon tea in The Oriental Restaurant (one out of three main restaurants on board Britannia) Courtesy of Celebrity Patissier –  Eric Lanlard.  Usually you will be expected to pay a small charge on board for Eric’s afternoon tea and it was easy to see why.  We were met with a mouthwatering parade of savories and a host of cute little sweet treats, naturally scones were also included.  All of this was topped off with a silver service of unlimited tea and coffee. I will be booking afternoon tea on board Britannia next time and would highly recommend this to anyone else cruising on board Britannia.

Attending the Celebrity Premiere of Astonishing was indeed astonishing, it is likely to feature as a #throwbackthursday on my Instagram and Twitter accounts for some time to come.  The entire day was planned to perfection by P&O cruises who must be credited with this revolutionary first at sea.  I am incredibly thankful and grateful to P&O for my invitation and for a magical memory that will last a lifetime.

Claire Harris, founder of FirstInitialSea, is a self confessed cruising addict with a serious love for travel. She lives in the United Kingdom with her husband and their three girls. This article first appeared on her website’s blog page. Make sure to follow her on social media and check out her website to follow her adventures!